As Arctic sea ice melts, killer whales are moving in 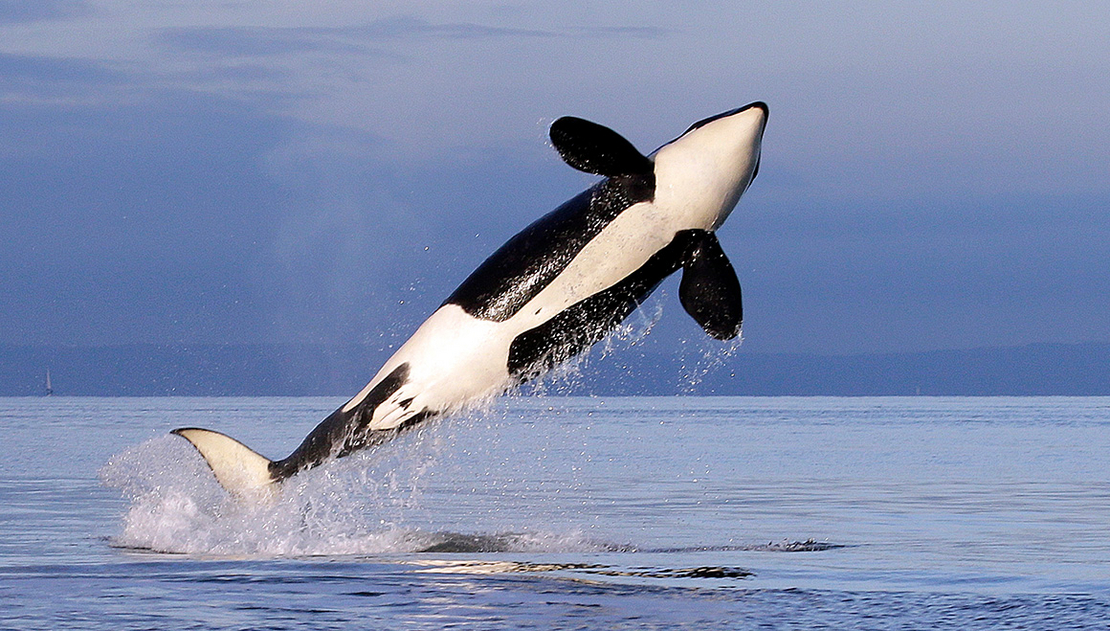 One of the ocean’s most fearsome predators is muscling into new parts of the icy Arctic Ocean.

Orcas, also known as killer whales, are showing up in places they’ve never been spotted before. Scientists believe melting sea ice is to blame.

“[Killer whales] will normally avoid ice to avoid entrapment and suffocating,” said Brynn Kimber, a research scientist at the Cooperative Institute for Climate, Ocean and Ecosystem Studies, at a press conference Wednesday hosted by the Acoustical Society of America. “But with less ice, of course there’s less of a risk to them, so they’re able to venture further into the Arctic.”

Kimber has been tracking the movements of killer whales through the Alaskan Arctic using underwater recorders, which pick up the sounds made by marine animals as they swim. Orcas have a very distinctive call, so they’re easy to recognize on the recordings.

Kimber presented her findings yesterday at the Acoustical Society of America’s annual conference in Seattle. The study draws on eight years of acoustic data, from 2012 to 2019, collected by recorders operated by NOAA’s Marine Mammal Laboratory.

The conclusions: Orcas are moving in as ice is moving out.

Data from the Bering Strait, which runs between Alaska and Russia, suggests that killer whales are moving into the area earlier in the year as time goes by. Killer whales are typically seasonal visitors in this area, migrating in during the summer when the sea ice melts away and moving back out when the water begins to freeze.

In 2012, when the recordings begin, the sea ice was melting in June. By the end of the dataset, in 2019, it was disappearing a full month earlier. Meanwhile, orcas started showing up earlier as well.

A station in the northern Chukchi Sea recorded orcas in 2018 and 2019, in a place where they hadn’t previously been detected. The ice there would typically be too thick.

“We were seeing killer whales there where we really didn’t expect to see them,” Kimber said in an interview with E&E News.

It’s unclear why the killer whales are moving in. But Kimber suspects they’re probably following prey.

Killer whales often feed on gray whales, bowhead whales and various kinds of seals, all of which frequent the Arctic Ocean. These animals are adapted to the cold climate, and they’re able to easily navigate through the icy waters. Killer whales, on the other hand, find it difficult to swim through ice-covered sea — the tall dorsal fins on their backs make it difficult for them to crunch through the ice.

As the sea ice disappears, killer whales may find it easier to follow their prey farther north into the Arctic Ocean.

Their presence in these northern waters is a possible cause for concern, Kimber pointed out — at the least, it’s worth keeping an eye on. Killer whales are skilled hunters, and they could have cascading consequences for the delicate Arctic food web.

There could also be consequences for nearby human communities, she added. Bowhead whales, for instance, are also a key source of subsistence for some Indigenous communities in places like Alaska and Siberia.

It’s not the first study to suggest that killer whales are migrating into the Arctic. Others have also found that orca sightings have increased over time, mainly in the Canadian Arctic.

And other studies have also warned of orcas’ potential impact on the Arctic ecosystem. One recent study, published last year in the journal Global Change Biology, found killer whales in the Canadian Arctic — a seasonal population of probably around 160 orcas or so — can consume more than a thousand narwhals each year.

Narwhals, like bowhead whales, are an important traditional food source for some communities in the Canadian Arctic.

Much more monitoring is needed to fully understand the consequences of the changing Arctic ecosystem. Research specifically focused on orcas and climate change is still relatively limited.

But “because killer whales are so good at hunting things … I think it is very important to keep an eye on,” Kimber said.