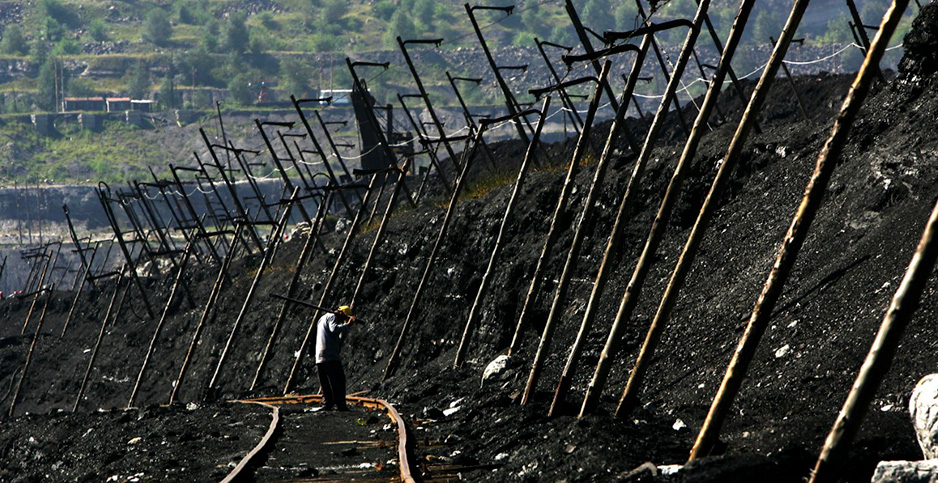 A coal worker in China. Global financiers are turning away from coal projects, but not natural gas power plants. That could challenge global climate goals. China Photos/Getty Images

Major energy financiers are backing away from future coal projects as pressure grows to meet global climate targets. But investments in natural gas continue to rise, stirring debate about whether the world is shifting away from fossil fuels fast enough to prevent dangerous warming.

Abandoning coal is becoming common as nations like South Korea, a major coal funder, commit to halting investments in overseas projects. The United States released an international climate finance plan at a White House summit last month saying it would stop funding carbon-intensive projects in other countries and increase investments in "climate-friendly" activities.

The latest move comes from the Asian Development Bank, which has a draft energy policy that proposes ending financing for new coal power plants and mining. It also would end lending for oil and natural gas field exploration, drilling and extraction. But the bank will consider financing natural gas projects under certain conditions, including as backup systems for renewable energy grids.

The growing expulsion of coal reflects its association with rising temperatures worldwide. Natural gas possesses a cleaner image, fostered by its release of less emissions. But the battleground over fossil fuels is shifting, and gas is increasingly being seen as a threat to global climate goals.

The announcement of new liquefied natural gas projects set a record in 2019, reflecting the "relative abundance of natural gas in the world" and a view among investors that gas is "relatively resilient" to more ambitious climate scenarios, according to the International Energy Agency. Those investments later dropped due to several factors, including COVID-19 pandemic-related lockdowns and falling prices, making it more challenging to see a trend.

Coal supply investments also rose in 2019, though that’s largely because of an expanding footprint in China. Coal investments by the rest of the world were relatively flat, IEA data shows.

Nevertheless, continued funding for gas has exposed tensions in moving to a zero-emissions economy, with many utilities saying solar and wind energy remain unreliable and the technology for storage is still too expensive.

At a global level, some development groups and political officials argue that countries still striving to provide basic electrification shouldn’t be prohibited from using gas as an alternative to higher-emitting fuels like coal. They say gas can be part of a just transition.

"We have to try to accelerate the transition to clean fuel," U.S. climate envoy John Kerry said during a congressional hearing last week, noting that gas would remain a fuel source for some time.

"I’d rather see gas used than coal anywhere in the world, and I think there are ways to try to assist in doing that," he added.

Environmental groups, meanwhile, argue that continued investment in gas locks in infrastructure that could pollute well into the future, threatening efforts to keep global warming to the 1.5-degree-Celsius limit beyond which grave ecological impacts are projected.

All the commitments with regard to overseas financing and carbon targets "don’t really add up to enough," said Kate DeAngelis, an international policy analyst with Friends of the Earth. "That support [for gas] will be building infrastructure that will last for decades to come."

A report by Friends of the Earth and Oil Change International found that Group of 20 countries have provided at least $77 billion in public financing to oil, gas and coal projects since the Paris Agreement was announced in 2015, about three times more than what’s being invested in clean energy.

That raises questions about exceeding the global carbon budget. Carbon dioxide emissions need to reach net zero by 2050 at the latest to prevent what scientists say would be dangerous temperature increases. And "that essentially precludes the use of natural gas," said Robbie Orvis, director of energy policy design at Energy Innovation, an energy and climate policy firm.

Modeling conducted by Orvis shows that the United States would need to derive 80% of its energy from clean sources by 2030 to meet President Biden’s goal of halving emissions in nine years. Natural gas would account for the remaining 20% of energy. Coal isn’t included.

"These are large assets with a long lifetime, and if we’re going to invest in a whole bunch of natural gas infrastructure, it’s not super-realistic to think that’s going to disappear in 10 or 15 years when we decide we’re going to cut emissions further," Orvis said.

Others say gas can act as a "bridge" to help with a transition to cleaner energy use and is necessary for low-income countries that lack basic access to electricity.

"Gas is really good at filling in gaps between variable wind and solar generation in a way that coal is not," said Zeke Hausfather, a climate scientist and energy systems analyst at the Breakthrough Institute, a California-based environmental research center.

Under energy models developed in line with the United Nations’ scientific panel on climate change, global gas use tends to peak and then decline somewhere around 2030 in a 1.5 C scenario, meaning gas plants will still be in use for years to come — just much less. Coal use has already begun to drop off, in that scenario.

"So I think we need to try to minimize the amount of new gas that’s being built," Hausfather said. "But at the same time, gas is going to be with us for much longer than coal."

The concern for the next few decades, Hausfather added, is in places like China, India and Indonesia. In "these middle-income countries that already have modestly high energy use … we need much more of a focus on driving investment toward clean energy sources," he said.

Vijaya Ramachandran, the director for energy and development at the Breakthrough Institute, recently wrote an article in Nature arguing that blanket bans on fossil fuel funding would entrench poverty in developing regions such as sub-Saharan Africa, where basic electrification is a priority.

Hausfather said such bans don’t account for the level of nuance needed.

"When we’re talking about financing for fossil fuels, particularly in the developing world, we need to take a scalpel rather than a sledgehammer to it and treat coal and gas very differently," he said.

A recent report by a group of former U.S. officials and energy experts and supported by the Energy Innovation Reform Project said that exporting liquefied natural gas "could contribute substantially to U.S. efforts to restore competitiveness and enhance America’s global influence."

Daniel Poneman, a member of the group who was a deputy Energy secretary during the Obama administration and is the president of Centrus Energy Corp., called gas "a very powerful tool to help wean the region and the world off coal."

When gas displaces coal, it can be helpful for emissions reductions, said Orvis of Energy Innovation. But the cost of investing in natural gas systems that would need to be decommissioned before the end of their life cycles doesn’t make much financial sense, he argued.

It’s also money that could be spent on other needs, such as health care, education or clean energy development, said DeAngelis of Friends of the Earth. She supports distributed renewable energy systems that are small and localized and could be put online faster and more cheaply than gas.

While burning gas creates about half the emissions associated with burning coal, it is also a source of methane, a potent greenhouse gas with a stronger warming potential.

A report issued last week by the U.N. Environment Programme and the Climate and Clean Air Coalition said methane levels have increased rapidly over the past decade and must be reduced to hold global warming to 2 C, the far end of temperature targets under the Paris Agreement (Greenwire, May 6).

Global gas demand is set to grow this year by 1.3% over 2019 levels, driven mainly by fast-growing markets in Asia, according to IEA. Demand in China alone is projected to increase 14% over 2019.

Much of that demand will be met through imports, including from the United States. That highlights a climate challenge. Methane leaks and the energy required to ship liquefied natural gas around the world bring its overall emissions closer to those of coal, Orvis said.

And that poses an obstacle to Biden’s climate aims.

There are currently two dozen LNG export terminals approved or proposed in the United States, with a capacity of around 38 billion cubic feet per day. If they are all built, total LNG export capacity would rise dramatically, putting the United States on a path to potentially export a large amount of emissions.

"Continuing to grow and export a lot of U.S. gas … is just not compatible with a 1.5-degree future," Orvis said.

"We have this large supply of domestic natural gas. But if we’re serious about global emissions in the long run, we can’t be exporting all that gas and just letting other countries burn it."