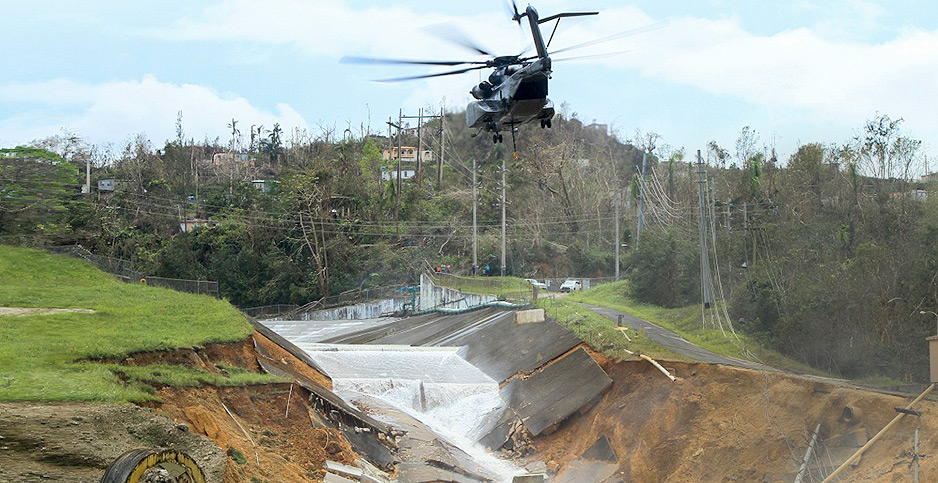 The spillway at the 90-year-old Guajataca Dam in Puerto Rico failed during Hurricane Maria, leading to the evacuation of 70,000. The Army Corps of Engineers has taken over emergency response, including dropping concrete barriers from helicopters to stem the flow of water. Pfc. Deomontez Duncan/U.S. Army

In Northern California, a string of "atmospheric rivers" rained down on the Oroville Dam last winter. The spillway at the nation’s tallest dam failed, forcing the evacuation of nearly 200,000 people.

This year’s unrelenting weather has laid bare the shortcomings of the nation’s more than 90,500 dams, most of which are more than 50 years old. The vast majority — more than 87,000 — are owned by private entities, local governments or public utilities that are regulated by a patchwork of state agencies of widely varying strength.

President Trump wants to zero out the Reclamation program’s budget. Seemingly because it grew out of the Obama administration’s climate change adaptation strategy, the Trump’s 2018 budget proposal calls for cutting the bureau’s "resilient infrastructure investments."

The program was a natural fit for the bureau. For 40 years, Reclamation and the Army Corps of Engineers, which owns and operates many of America’s largest dams, have been the country’s leaders in developing dam safety protocols that are passed along to industry and state regulators responsible for the vast majority of the country’s dams.

"We’ve ended up with 50 state policies that are different and often less than the federal standard," said Eric Halpin, the Army Corps’ deputy dam and levee safety officer.

The Guajataca Dam is an extreme example that underscores Halpin’s point. The 120-foot earthen impoundment is owned by the Puerto Rico Electric Power Authority, the territory’s major utility. The dam hasn’t been regularly inspected, and the utility — $9 billion in debt — isn’t financially capable of the necessary operations and maintenance investments.

And even though talk about "climate change" has become taboo in the Trump administration, the bureau’s program seeks to address one of the president’s professed priorities: infrastructure.

But López also criticized the administration’s unwillingness to consider how climate change might have affected dams and the natural disasters this year.

Dam failures and catastrophes in America are nothing new. In fact, the country’s emergency response system is rooted in them.

In 1889, the crumbling of the South Fork Dam near Pittsburgh killed more than 2,200 in Johnstown, Pa. It remains one of the country’s worst catastrophes.

Importantly, FEMA’s program relies on the technical expertise of the two agencies who own some of the largest dams in the country: Reclamation and the Army Corps.

After the Teton Dam failure, Reclamation — which owns or maintains 492 dams, including behemoths like the 600-foot Shasta Dam in Northern California — became the nation’s leader in studying dam safety.

"Infrastructure, left to its own devices, invariably falls apart over time," said John Peabody, the Army Corps’ former deputy commanding general for civil and emergency operations. "We are just managing a continuing crisis."

It’s the type of technical study that Reclamation does well, said David Wegner, a 20-year bureau veteran who has also worked on water and energy issues on Capitol Hill.

Connor, the former Interior deputy secretary who also served as Reclamation’s commissioner from 2009 to 2014, said the program was specifically designed with that in mind.

"From my policy perspective," he said, "those programs need to continue to help inform how we are going to do that with other dams that don’t have that much expertise and resources behind them."

The program, which received $1.5 million to $3 million in funding, was zeroed out in President Trump’s budget proposal. Trump’s budget almost certainly won’t be enacted, but it illustrates the administration’s priorities as Congress considers what to do when current funding runs out in December.

In testifying on the budget before Congress, then-acting Commissioner Alan Mikkelsen highlighted dam safety and reliability as one of "Reclamation’s highest priorities." And Mikkelsen, who is now the bureau’s deputy commissioner, noted that there is $88.1 million in the proposal for the bureau’s dam safety and risk assessment program, roughly the same funding level that separate program currently has.

Aside from the Reclamation program, experts say this year’s weather shows the need for a national dam safety standard.

Halpin, the leading dam safety official at the Army Corps, noted the agency’s dam safety program is about $10 million per year and has been consistently funded — including in Trump’s budget proposal.

“From a technical standpoint, it’s a great idea if you have standards and everyone complies with those — that’s how you reduce risk.”

"If you are a person living and working below a dam, you don’t care if it’s a state, federal or local standard," he said. "With 90,000 dams, we know that the condition of many high hazard dams is not what it ought to be." ("High hazard" refers to a risk assessment that says if a dam were to fail, it would cause fatalities. There are currently nearly 15,500 high-hazard dams in the country, a figure that continues to grow due to increased development in floodplains.)

"From a technical standpoint, it’s a great idea if you have standards and everyone complies with those — that’s how you reduce risk," he said.

"It’s not just a physical issue with the dams, but a psychological issue on our collective heads. The problem involves amnesia and denial, in my view," he said. "Your strategy is what you fund."