As Dems squabble, GOP floats its own permitting bill 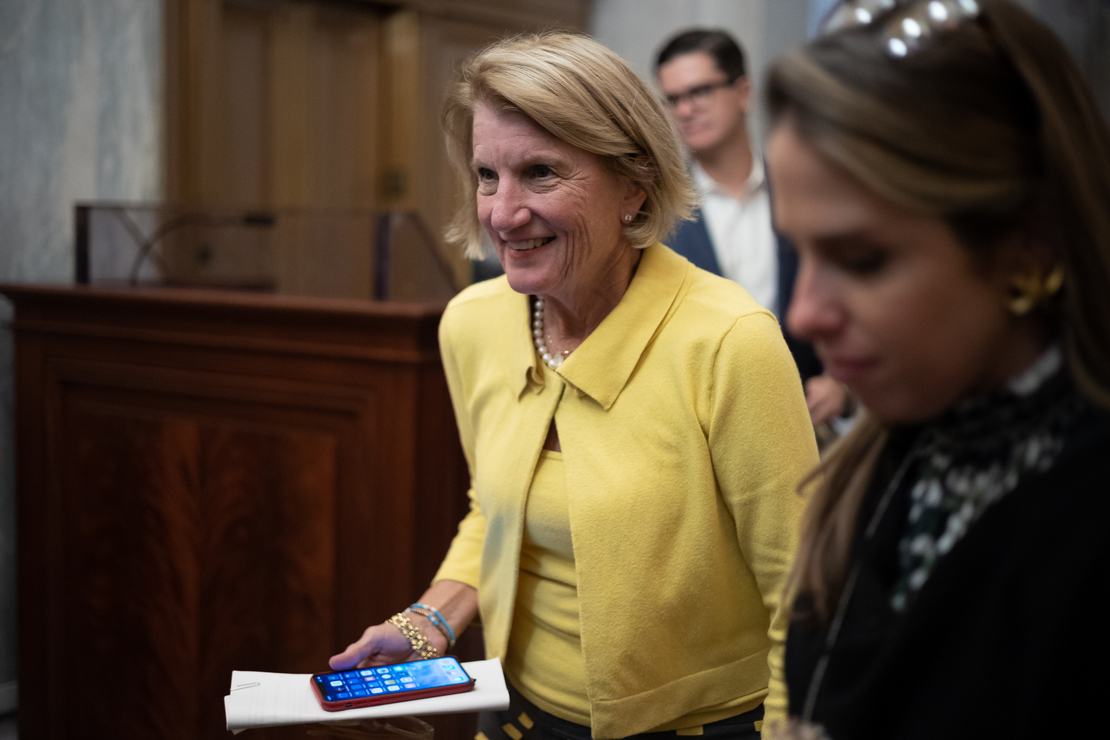 Republican senators on Monday offered their own permitting legislation to counter an ongoing effort from Democrats.

Republicans have long harped on the cumbersome permitting system, but they have cast doubt on a deal Senate Energy and Natural Resources Chair Joe Manchin (D-W.Va.) struck with Democratic leaders for his vote on last month’s climate bill (E&E Daily, Aug. 3).

“Since our calls for action and offers to see legislative text from the permitting ‘deal’ remain unheeded, Republicans are introducing this legislation today to deliver solutions to the roadblocks, delays and postponements of key infrastructure projects across the country,” said Capito.

As the Senate GOP shopped its offer, House Democrats continued to gather support from members opposed to advancing a permitting overhaul in tandem with a stopgap government funding measure.

In addition, major environmental groups, including the League of Conservation Voters, came out against the effort.

The Republican permitting legislation hits on key GOP priorities and would codify many Trump-era changes — like faster environmental reviews, water permit approvals and restrictions on the metric known as the “social cost of carbon.”

It would approve the Mountain Valley pipeline and insulate it from judicial scrutiny, which is also a top Manchin priority.

Despite its mostly partisan bent, Capito told reporters Monday the legislation is not meant to be taken as an all-or-nothing approach. Instead, she said, it is meant to fill the void from the lack of legislative text from Democrats.

Manchin’s office released a broad framework of the reform structure in August, but exact language has not yet been finalized.

“I think we’re always pro-permitting reform, so we just have to see where this goes,” Capito said.

Democratic leaders said last week that they expect their permitting deal to be attached to the upcoming stopgap funding resolution that must pass by Sept. 30 to prevent a partial government shutdown. The bill will require Republican support to move forward.

GOP lawmakers have been slow to back the deal, preferring to wait for finalized text before publicly endorsing the strategy. Capito’s bill and its broad support among Republicans at least indicate interest for action, she said.

Manchin appeared excited by the release of the Republicans’ bill as evidence for their appetite on permitting reform.

“I think it’s wonderful that we are all on the same page,” Manchin said.

Manchin did not have a firm update on when his own permitting language would be released.

“I’m not in charge of that … but we’ve been working on all the technical changes, so hopefully, should be soon,” Manchin told reporters.

Even as the Senate looks to pick up momentum, progressives opposed to the permitting deal were bolstered by additional voices coming out against the deal yesterday.

House Natural Resources Chair Raúl Grijalva (D-Ariz.) secured an additional five lawmakers to a coalition he has assembled to oppose attaching the reform package to the spending bill — 79 lawmakers have now announced their opposition.

“I don’t know how a [continuing resolution] vote will go if it includes the permitting rider, but the opposition is loud and only getting louder,” Grijalva said in a statement. “I encourage leadership to listen to its caucus and keep us out of a shutdown standoff that nobody wants.”

Major environmental groups like the League of Conservation Voters, the Natural Resources Defense Council and Climate Power also came out against an effort that would attach the permitting deal to the funding bill.

In a letter sent to Senate and House leadership, the three groups, among others, argued that the agreement, as outlined in a leaked draft from the summer, could undercut progress made in the reconciliation package to help fund government agencies’ permitting processes while also permanently taking legal muster out of challenges to national environmental review laws.

“This permitting rollback proposal would prioritize fossil fuel interests over the environment and the health of impacted communities, which are disproportionately communities of color and low wealth communities,” the groups wrote.

They charged that approving the Mountain Valley pipeline would have the same climate impact as 23 coal-fired power plants and threaten neighborhood water quality.

The growing opposition seems to be catching Democratic leaders’ attention.

“Our members are concerned about that,” House Majority Leader Steny Hoyer (D-Md.) said on Bloomberg Television on the permitting deal.

“We’ll have to see exactly what the language of that agreement is. My expectation is that the Senate will move first on the continuing resolution, and we’ll see how the Manchin agreement is included in that document and take it from there,” he said.

The pushback from House Democrats and green groups could put President Joe Biden in a tough spot. He’s eager to celebrate his legislative victory — he’s throwing a huge party at the White House today — and at the same time, he has said he’s “committed” to working with Manchin to get the permitting deal done.

“Without compromise, there would be no deal,” press secretary Karine Jean-Pierre told reporters Monday morning aboard Air Force One (E&E News PM, Sept. 12).

Though the final text has not been made public, the Manchin summary draft appears to have some overlap with the GOP legislation.

For one, it would codify a policy known as “one federal decision,” which aims to speed up project approvals and limit the pages of environmental documents. It would also restrict judicial challenges to energy project approvals.

Still, the Capito bill would go much further than what is expected of the Manchin text.

Specifically, the GOP would strike the Clean Air Act mandate that EPA review and comment on newly authorized federal projects for construction. The change would likely cause a major spike in air pollution, an expert said.

The Capito offering would also have far-reaching implications for the water sector and permitting.

Specifically, the legislation would codify the Trump administration’s definition of “waters of the United States,” or WOTUS, ultimately determining which waters fall under federal jurisdiction.

That definition is currently the subject of both an ongoing rulemaking at EPA and an upcoming Supreme Court case in which experts predict justices will likely narrow the definition of WOTUS and pull back the number of streams and wetlands that fall under EPA and the Army Corps of Engineers’ oversight (Greenwire, July 8).

The bill would also cement into law the Trump administration’s rules around state and tribal reviews underpinning water permits required to advance projects, including mining, energy projects like oil and gas pipelines and development.

The legislation would codify the Trump administration’s Clean Water Act Section 401 certification rule. Energy industry leaders say the section has been used by states to prevent or stall pipelines from being built.

Earlier this year, EPA issued a proposal that would give states and tribes more power in the process and provide more flexibility around the permitting process (Greenwire, June 2).

The Republican bill would also elongate the life spans of state-issued permits for sites such as coal ash ponds (Greenwire, Aug. 5).

Instead of five years, permits that states issue under the federal program, the Clean Water Act’s National Pollutant Discharge Elimination System, or NPDES, would be valid for a decade.

EPA has authorized 47 states and one territory to perform permitting and enforcement aspects of the program, while EPA retains oversight responsibilities.