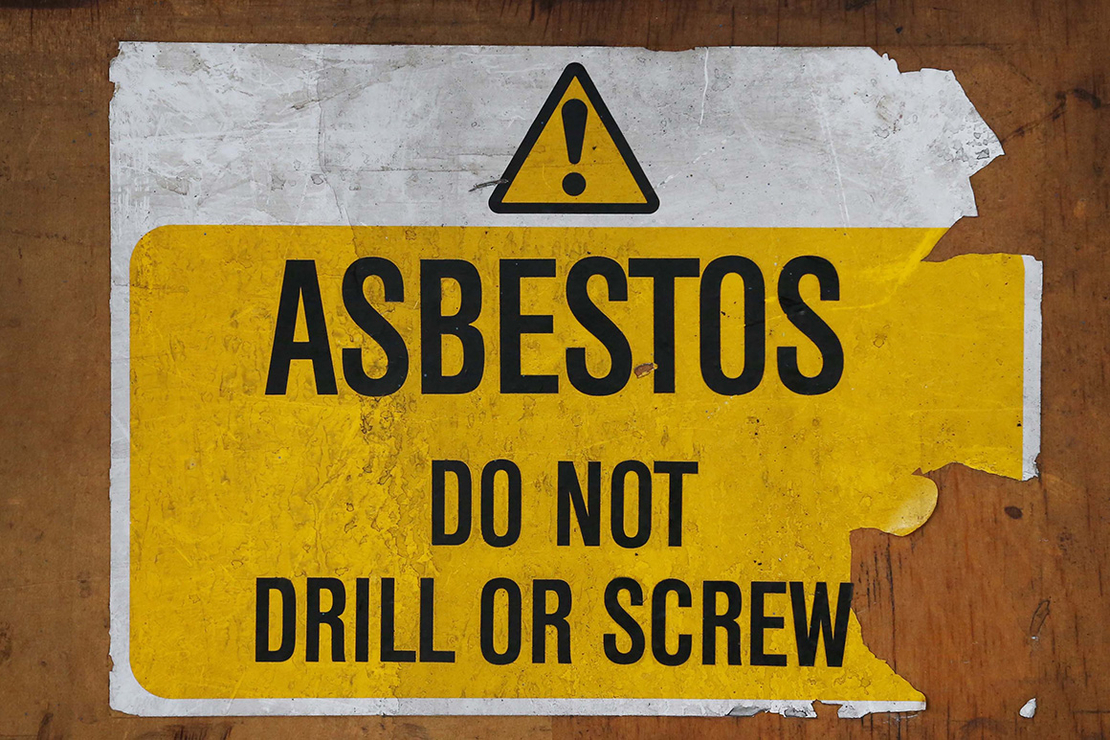 One of the world’s most notorious carcinogens remains in use in U.S. manufacturing, and anti-asbestos advocates have ramped up an awareness campaign highlighting environmental justice concerns.

After years of public criticism and a major overhaul of U.S. chemicals law, EPA is finally moving to ban asbestos, which has been linked to rare cancers and other deadly health impacts, but activists remain concerned about people working at and living near one of the last remaining authorized use of asbestos — chlor-alkali industry plants, a major force in chlorine production.

Late last month, the Asbestos Disease Awareness Organization hosted a public meeting in New Orleans to bolster community education about the issue. ADAO President Linda Reinstein, whose husband, Alan, died of mesothelioma years ago, said the event was part of a broader push to keep residents in the area informed.

“Most Americans do not know that asbestos is still legal and lethal in the United States today,” she said. “And those most at risk from exposure, like these communities, deserve every opportunity to protect themselves from harm caused by the chlor-alkali industry’s decision to continue to use this deadly chemical.”

Asbestos diaphragms are utilized in about a third of U.S. chlorine manufacturing, one of the last real uses for the chemical nationally. The industry specifically uses “white” asbestos, or chrysotile, the only kind still imported into the country and the type targeted by EPA as it moves to implement a ban.

“The chlor-alkali plants that use dangerous and outdated asbestos diaphragms must be held accountable for their choices,” Reinstein said. “Their use of asbestos creates multiple potential pathways for exposure to this known [carcinogen].”

ADAO has spent years trying to push regulators and lawmakers to crack down on asbestos, while also emphasizing outreach to the communities near manufacturing sites, which are disproportionately low-income and nonwhite. The in-person event held Aug. 23 “provided a space for employees and their families who are currently or have been previously employed” by the four chlor-alkali plants in Louisiana that use raw chrysotile asbestos.

Those sites include two Occidental Chemical Corp. plants, one in Convent and one in Taft, and Olin Corp. and Westlake Chemical Corp., both in Plaquemine. ADAO estimates that Louisiana saw 22,953 asbestos-related deaths between 1991 and 2019, which the Institute for Health Metrics and Evaluation at the University of Washington says were occupational in nature.

Olin and Westlake did not respond to requests for comment. Occidental, better known as OxyChem, redirected the request to the American Chemistry Council’s chlorine industry panel.

In an unattributed statement, that panel said the industry’s use of asbestos is “tightly regulated.” While EPA’s risk evaluation for asbestos has not looked at exposure risks for surrounding communities, asbestos releases are regulated under both the Clean Air Act and the Clean Water Act. ACC also emphasized worker protections, stating they wear personal protective equipment and “the workplace is monitored for chrysotile asbestos and employees are afforded specific medical monitoring and surveillance.”

But anti-asbestos advocates counter that communities and workers lack the education they need to protect themselves from the carcinogen.

They say that is especially true in low-income communities of color, where many people are unaware of the asbestos that might be in their homes or in nearby manufacturing plants. Regardless of protections put in place by industry, they say the risks are too severe to continue.

Travis London, a Louisiana activist with the environmental justice group Public Lab, shared his family’s experiences during the meeting. London’s grandfather, Alfred Watts, worked in a chlor-alkali plant for decades and died of mesothelioma, resulting in a nearly $4 million settlement.

“Asbestos robbed me of my grandfather and left a hole in our family,” said London. “There is no cure for asbestos-caused diseases. Education is the best prevention — and unfortunately, most Americans, like my family, are left in the dark when it comes to the dangers of asbestos exposure.”

ADAO’s community push coincides with a mounting sense that asbestos is on its way out of mainstream use.

Industry members have repeatedly argued that losing access to asbestos would imperil safety, as chlorine is key to purifying water and other measures to protect human health. But according to EPA, only 10 chlor-alkali industry plants nationwide still use asbestos in their chlorine manufacturing process.

Financial filings also show that those businesses are winding down their asbestos use. The company Olin, for example, said in a recent quarterly report that it had “made the decision to permanently close approximately 50% of our diaphragm-grade chlor alkali capacity” at an Alabama factory. In August, the company expanded on that with plans to massively shutter diaphragm capacity in Freeport, Texas. Similar adjustments are occurring across the industry: OxyChem announced the closure of a New York chlor-alkali diaphragm-based plant in 2021.

But even as that wind down is playing out, advocates worry that the industry is stockpiling asbestos. Data from the U.S. International Trade Commission released this past spring showed that imports in the first few months of 2022 had already surpassed all of 2021 (E&E News PM, May 12).

Such trends are raising concerns for groups like ADAO. Advocates argue that more expansive action from EPA and immediate intervention from Congress are necessary in order to truly crack down on asbestos.

Some of that action is underway. This spring, EPA also said it would ban imports of raw chrysotile asbestos and chrysotile-containing products (Greenwire, April 5). A month later, the agency additionally moved to require comprehensive reporting on asbestos, a step that will compel manufacturers and processors to give EPA extensive information regarding the chemical (E&E News PM, May 5).

But advocates argue those actions do not go far enough. Only chrysotile is set for a ban under EPA’s plan. And they worry about the agency’s timeline, which has prohibitions on asbestos diaphragms and sheet gaskets taking effect two years from finalization, while a ban on other industrial uses would take effect within 180 days.

The group has thrown its might behind legislation that would close some of those gaps. Named for Reinstein’s late husband, the “Alan Reinstein Ban Asbestos Now Act” (S. 4244 and H.R. 7810, or “ARBAN”) would ban the manufacturing, processing, use and commercial distribution of asbestos, regardless of type. That bill would also transition the technology used by chlor-alkali plants and establish reporting requirements, among other measures.

Despite being introduced multiple times, “ARBAN” has never cleared Congress. The bill has faced resistance from Republicans in particular, who have raised concerns regarding pushback from forces like the chemical industry.

Some sectors also remain somewhat opaque around the legislation. The water industry, for example, has largely remained quiet on “ARBAN,” even as various trade organizations have raised concerns to EPA over the banning of chrysotile and its implications for water systems.

The American Water Works Association did not respond to a request for comment regarding its stance on “ARBAN.” Another trade organization, the American Public Works Association, said via email that it had no comment on the bill but does “support the management and abatement of asbestos in government facilities.”

Sen. Jeff Merkley and Rep. Suzanne Bonamici, both Oregon Democrats, nonetheless revived “ARBAN” this year. During a summer Senate hearing on the bill, Merkley emphasized that the chlor-alkali industry was already moving away from asbestos, with the trajectory around the chemical clear (E&E Daily, June 10).

“It’s not more expensive,” he argued, adding that the industry “has been moving toward that [phase-out] on its own, for economic reasons.”

In a July letter, a coalition of 32 industry groups asked the agency to halt its plans, arguing a ban on chrysotile would lead to “a severe and abrupt reduction in chlorine production” and create supply chain woes. ACC, the U.S. Chamber of Commerce and the American Petroleum Institute were among the groups signing onto that letter (Greenwire, July 12).

“We do not dispute the fact that asbestos is hazardous to human health in some applications or when used without appropriate safeguards,” said Robyn Brooks, the group’s vice president for environment and safety. “However, the EPA has long recognized that the chlor-alkali application, with proven safeguards in place, mitigate any health risk to workers and the communities surrounding asbestos diaphragm chlorine production facilities.”

Brooks also spoke to the concerns raised around asbestos exposure for workers and nearby communities, asserting the group’s mission is safety for “member company employees and the general public, including those living and working near member company facilities.” The industry, Brooks said, has many safeguards in place to offer protection.

Such assurances will not stop anti-asbestos advocates. ADAO indicated it will continue to reach out to communities near chlor-alkali plants as it seeks to heighten education and awareness and push for a full and swift ban.

London, who spoke at the Aug. 23 meeting, said in a statement that such events are critical for people who might otherwise be unaware of the dangers of asbestos and their proximity to it. That information can be critical in communities where the issues linked to the carcinogen remain opaque.

“The goal of this meeting was to educate those most at-risk about how to avoid exposure and what to do if they are exposed,” said London.