As Europe hunts for gas, where do the emissions go? 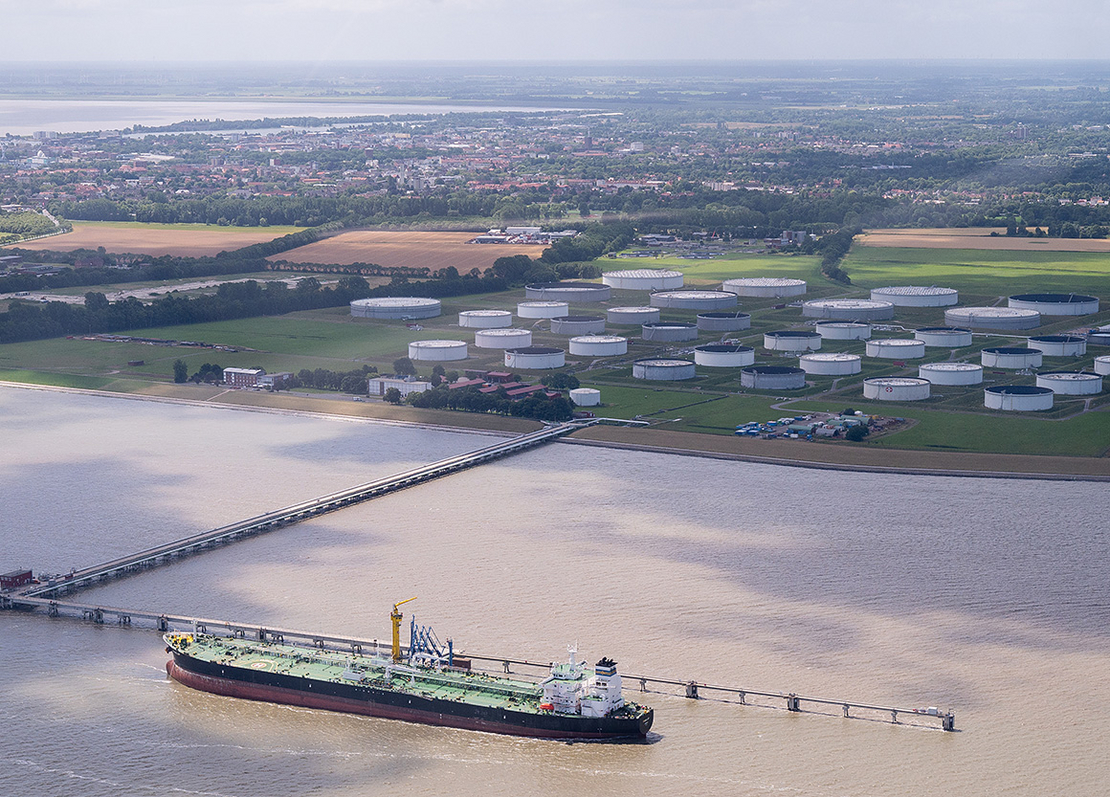 Construction of the Wilhelmshaven liquefied natural gas terminal in Germany is expected to be completed this year. It will allow storage and regasification ships to convert LNG into gas for pipeline transport. David Hecker/Getty Images

European leaders are assuring the world that they won’t overshoot their climate targets as they desperately search for new sources of fossil fuels.

But could global emissions rise, even if Europe’s don’t?

It’s a question increasingly on the mind of climate analysts and advocates as the European Union accelerates its hunt for alternatives to the Russian gas, oil and coal that keeps its economy humming.

They worry that the rush to find new fuels is driving interest in new projects outside Europe that could increase global emissions while leaving those countries searching for buyers once the European Union no longer needs their gas.

“If the E.U.’s policies feed an expansion of gas production globally that exceeds what it needs to replace the Russian gas for a period of time, then it creates a big problem,” said Bill Hare, founder and CEO of Climate Analytics, which provides scientific and policy analysis on climate change.

“It is not only damaging to the climate but also to the countries that will start investing in new extraction,” he added.

The European Union’s stated goal is to replace Russian fuel with gas from other countries as it works to reduce demand by boosting renewable energy capacity and improving energy efficiency over the coming years.

But some countries in Europe are also investing in new terminals to import liquefied natural gas while also expressing support for new gas projects in countries like Senegal and Nigeria.

The European commissioner for energy, Kadri Simson, said last week that the European Union had reached agreements for gas imports with Azerbaijan, the United States, Canada, Norway, Egypt and Israel and is exploring options to increase LNG imports from Nigeria.

Nigeria, along with Mozambique and Tanzania, are among several countries in Africa that have LNG export terminals proposed or under construction capable of handling 60 million tons of gas a year, according to the latest data from Global Energy Monitor.

In April, Italian energy giant Eni announced it would develop a liquefied natural gas field in the Republic of Congo with a capacity of 3 million tons of gas annually.

In Europe, there’s been a flurry of proposals to expand LNG import capacity since the European Commission announced it would cut its dependence on Russian gas. Analysts say that seems to be lowering the barrier for some LNG projects to advance their development timescales.

Most of those projects are floating terminals, which have a life span of 5 to 10 years and can be moved elsewhere once Europe gets through its initial energy crunch, but there are indications that some could become permanent, said Greig Aitken, a research analyst with Global Energy Monitor. He pointed to a pre-contract agreement between the Polish company PGNiG Group and Sempra Infrastructure that aims for gas sales lasting 20 years from terminals in Louisiana and Texas starting in 2027.

Those types of investments, if they’re finalized, could potentially lock in years of additional gas use and emissions.

Whether those emissions come from Europe, however, is an open question.

“There is a lot of thinking behind the scenes and among the LNG producers on how to align the short-term demand in Europe with a potential long-term demand in Asia,” said Anne-Sophie Corbeau, a senior research scholar on gas markets at Columbia University’s Center on Global Energy Policy. “And this is not easy, because nobody actually understands for how long Europe will need that LNG.”

On one hand, projects developed today to help Europe meet its demand could eventually be used to fulfill growing energy needs in Africa or Asia, where gas could help offset coal-fired power, which is more polluting when burned.

But the timing poses a challenge.

A recent study found that switching from coal to gas-fired power could reduce emissions. But there’s a hitch: If the world puts itself on track to prevent temperatures from rising more than 2 degrees Celsius, it won’t be long before coal is no longer used.

That means by the mid-2030s new gas supplies could end up displacing lower-emitting sources like renewables.

“In the near term, expanding natural gas through coal to gas switching is going to be beneficial for climate, but in the long term — like 2040, 2050 — it’s not,” said Arvind Ravikumar, an expert on natural gas and climate policy at the University of Texas, Austin, and an author of the study.

That makes new LNG more of an insurance policy in a world that hasn’t met its climate targets.

Whether new projects will be built depends largely on how long buyers are willing to guarantee their purchases — a typical precondition for investment. So far, European utilities have been reluctant to sign long-term contracts for projects, leaving them in the planning stages.

Still, the fact that countries with gas reserves are becoming active areas of interest has raised alarm among climate advocates.

“It’s not the quantum of change — it’s the direction of change that’s concerning because there’s an additional impact on emissions at a time when we’re looking to bring down everything that we possibly can,” said Shruti Shukla, international energy advocate at the Natural Resources Defense Council.

If the world is to bring net emissions to zero by 2050, no new oil and gas fields can be developed, and natural gas demand will have to be cut in half by 2045, according to the International Energy Agency.

The European Union’s own climate law calls for a 55 percent reduction in emissions by 2030, with gas use slated to fall 30 percent by that date and then decline rapidly.

In many ways, it is moving in that direction — despite its search for new gas.

Officials have also backed a plan to dramatically increase wind and solar capacity in part by easing permitting. And they’ve called for more energy efficiency in commercial and residential housing through the use of heat pumps, for example.

But the plan to slash imports of Russian fuel offers $10 billion for new gas and LNG infrastructure. In June, the European Union rolled back a commitment to end investments in fossil fuel projects in other countries. And nations like Germany are temporarily reactivating coal plants to help conserve gas for heating and industry.

Officials say the infrastructure investments won’t be locked in, a condition stated in the agreement to continue public support for international gas investments (Climatewire, June 28). And some argue that any new infrastructure must be capable of transporting clean hydrogen, when it becomes available.

The European Union imports nearly 60 percent of its energy, with gas making up roughly a quarter of the fuel used to heat homes and power industry. Prior to Russia’s war in Ukraine, 40 percent of the bloc’s gas imports came from Russia.

Ravikumar from UT Austin argues that despite leaders’ efforts to find new sources of LNG, the long-term strategy is clear: get off gas as quickly as possible.

“Europe isn’t increasing gas demand — they’re trying to replace the gas they were getting from Russia with other supplies,” said Ravikumar.

“That’s going to look very much in the near future like a significant expansion of natural gas infrastructure, but what they’re really doing is desperately trying to make up for a huge loss of energy supply from Russia,” he added.

For now, the European gas market has roughly balanced out, with LNG imports growing 50 percent in the first six months of this year compared to 2021, said Jack Sharples, a research fellow at the Oxford Institute for Energy Studies.

He wonders whether Russia will in the future produce as much gas as it did when Europe was a primary market. He outlined one scenario in which Russia produces less gas, other countries produce more and the global picture looks much the same as it did before the war rearranged the global enery landscape.

Other questions also remain, such as whether countries that need power now will fall back on coal as they work to transition to renewables rather than waiting for gas to become less expensive and more available.

That’s a challenge for countries with growing economies like India, which needs gas for agriculture and industry, said Ravikumar. But there are also incentives for India, where energy demand is expected to triple in the next 30 years to make the power sector less dependent on imported gas.

At the same time, the Russian war in Ukraine and rising energy prices could potentially delay the transition to clean energy in developing countries, putting climate goals further out of reach.

“Because now they’re spending money on getting fuel for their existing energy needs rather than investing that money in future low-carbon systems,” said Ravikumar.

The costs to Europe won’t be insignificant either. That’s raising questions about whether it can make the shift to a lower-carbon economy needed to achieve its climate targets on time — and whether it will cut funding for lower-income countries to reduce emissions. Already the European Union is among a group of wealthy nations that have failed to meet past promises to deliver $100 billion in climate funding for clean energy and adaptation efforts.

Those dynamics could make global climate talks in November more challenging, since it could expose Europe to criticism for pushing countries to take climate action even as it encourages the construction of gas infrastructure. With those talks taking place in Egypt, the new interest in African gas is also garnering attention.

“The European race to secure additional gas supplies from Africa, the U.S., and Qatar; the reopening of coal-fired power stations in Germany, Europe’s largest economy; Europe’s potential imports of African coal; plus recent declarations and decisions about the role of natural gas are sending mixed messages about international decarbonisation priorities,” Mostefa Ouki, a senior research fellow at the Oxford Institute for Energy, wrote in a recent paper.

Others will be watching closely for signs that Europe is serious about diminishing its use of the gas that it’s currently trying to find.

“The only way we’re going to get to the transition to a low-carbon world is not by thinking about new fossil fuel infrastructure,” Ravikumar said. “The way to do it is to destroy demand for fossil fuels.”