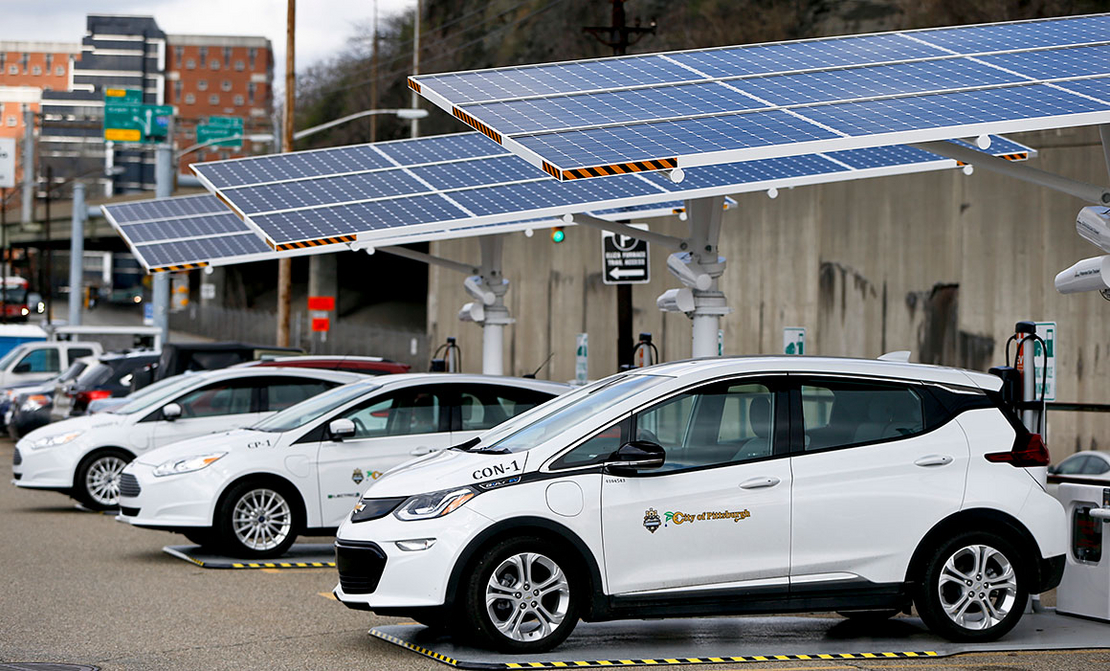 Automakers say they expect electric vehicle charging to be a money-making service, especially among fleets. Some of the city of Pittsburgh's fleet of EVs are parked under solar charging panels in this April 18, 2018, photo. Keith Srakocic/AP Photo

Companies and governments want to electrify their fleets of vehicles, but they “ have no idea how difficult it’s going to be,” said Chris Nelder.

From a city’s parking lot full of bland white sedans to a factory’s depot of delivery trucks, the people who manage those fleets are under pressure to go sustainable by going electric, and soon. But it is a different world.

Instead of gallons, it’s kilowatt-hours. Instead of pumps, it’s an exotic and expensive system of charging stations. Use too many electrons at the depot at the wrong time, and the fleet manager could wind up with a huge electricity bill.

"And there was nobody to teach them how to do it, either," said Nelder, who until recently ran the carbon-free mobility practice at the nonprofit RMI.

Now, perhaps, there is someone to teach them how to do it.

In the last month, America’s two biggest automakers, General Motors Co. and Ford Motor Co., have signaled they plan to move into the world of charging, and make money doing it. Their focus is fleets, where the potential for big sales meets a confused and intimidated customer.

Domestic U.S. automakers are leading this trend, as they aim to squash a bevy of electric startups also focused on fleet vehicles, like van-makers Electric Last Mile Solutions and Arrival.

The Biden administration also intends to lead the way into fleet electrification. In a January executive order, Biden ordered federal agencies to buy zero-emissions vehicles, including the 227,000 vehicles leased by the General Services Administration.

In June, Ford acquired Electriphi, a company that bills itself as "one-stop-shop for depot-charging."

"It’s a change for us to get up to speed immediately," said Ford CEO Jim Farley at an investor event last month.

Making money beyond the car

It’s not just the customer who needs help. Automakers face an expensive and uncertain transition from gas-powered cars to EVs, and they are looking to EV charging to soften the blow.

They see services such as EV fleet fueling as part of a new world where the automaker doesn’t just make cars, but offers an array of services that are central to the business.

Traditional automakers are chasing Tesla Inc., which pioneered the ability to make changes to a car’s performance remotely, a feature known as over-the-air updates. Tesla does some updates for free and charges for others, like a controversial autopilot service it introduced last week for $199 a month.

Last week, Volkswagen AG CEO Herbert Diess said that the revenue from services could eventually equal the amount it makes from selling vehicles.

"Revenues and profit pools will shift gradually through 2030, first from internal combustion engines or ICEs to electric vehicles, and later to software and services," he said at an event where he laid out the company’s plans.

The shift could alter the car-buying experience, as well as the vehicle itself. Today, when a regular person or a fleet manager buys a fossil-fuel-powered car, the features are the features. What you pay for — its backup cameras, or automated features like lane-keeping — are the abilities that car has for life.

The EV purchase experience is shaping up differently. Look at any new EV announcement, and the word "services" appears prominently.

Carmakers’ new EVs will have features like over-the-air updates, self-driving capabilities or the ability to turn on the air conditioning remotely. For fleet vehicles, the add-ons could include the ability to monitor drivers, or receiving alerts when a vehicle has been in an accident.

But the benefits won’t be free.

Instead, automakers are betting that buyers will pay twice: Once for a partially enabled vehicle, and then again for extra services. People already do this, for example, by buying an expensive iPhone, then paying again for new apps or the ability to store more data in the cloud.

For fleet customers, charging is shaping up as one of a bundle of services that they will offer, including telematics, vehicle servicing and financing. The system could benefit an automaker in the same way that the iPhone helps Apple, by creating an ecosystem that keeps the customer buying over and over again.

The new platform, Ford says, is "breaking away from the transactional, build-and-sell business model that has typified the auto industry for decades."

And charging is one where they expect to make money.

Ford, which calls its new service business Ford Pro, said its goal is "to capture over $1 billion of revenue from charging by 2030."

Switching from putting gas in a tank to putting electricity in an EV is new for anyone, but is exponentially more difficult for a vehicle fleet (Energywire, Oct. 16, 2020).

The issue is scale. Instead of sending vehicles out for a quick fill-up at a local gas station, a fleet manager must figure out how to charge dozens or even hundreds of vehicles during the brief overnight hours when they aren’t in motion.

This can mean turning the vehicle depot, which before had modest electrical needs, into a multi-megawatt power center. That involves lots of expense and permits. Then there’s coordinating all that charging, so batteries are full when the vehicles are needed.

Demand charges are steep extra fees imposed by utilities on electricity rates to discourage customers from charging when electricity is scarce.

The problem is that these fees, often established by utilities in slow-moving rate cases before state regulatory commissions, don’t change quickly. They are not yet designed for a world in which vehicle depots are slurping up vast quantities of electrons at the same time.

"How do you avoid demand charges when you’re charging 1,000 vehicles a night?" asked Nelder, who co-wrote a report on how fleets are managing the transition to electric.

Moving to EVs can save a fleet huge amounts of money because the vehicles are of much simpler construction and potentially cost less to repair than gas- or diesel-powered vehicles. But those benefits could be erased by expensive demand charges.

"What really matters to [fleet managers] is can I get the vehicle, can I get the charger and am I going to be able to manage the timing?" said Jonathan Levy, the chief commercial officer of EVgo, which is working with GM.

"It makes it a lot easier to sell vans if you have a charging solution," he added.

To get to that charging solution, automakers are taking different routes.

The services are meant to work with BrightDrop, a system of electric delivery vans and services that GM unveiled in January. It will also work with GM’s other EVs.

“Commercial fleets will soon have more confidence and convenience when it comes to electrifying their fleet,” said Alex Keros, GM’s lead architect of EV infrastructure. “Expanding charging infrastructure is a critical part of our work toward an all-electric future."

Levy of EVgo declined to answer if GM was getting part of the money if a customer creates an installation with EVgo.

Ford, meanwhile, bought Electriphi Inc., one of the budding firms that offers charging solutions. It has not yet made clear how that company’s services will appear in Ford’s lineup.

It is likely that these moves are just the opening act of how automakers will integrate themselves with the plugs that charge their vehicles.

"This is the beginning of something," said Nick Nigro, the founder of Atlas Public Policy, which studies EVs. "This is not the complete picture of where things are going."