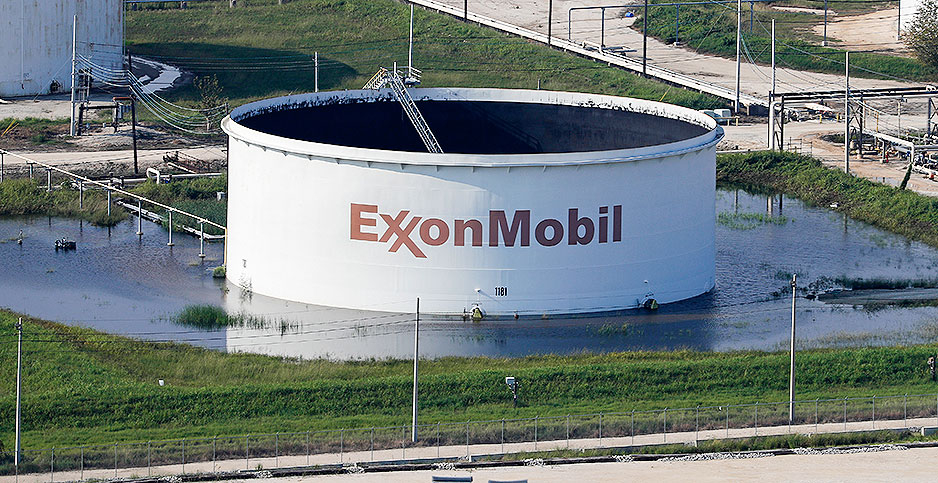 Texas lawmakers are looking for ways to protect the state's refineries from flooding after years of supercharged hurricanes. Aaron M. Sprecher/Associated Press

With the memory still fresh of Hurricane Harvey’s deadly 2017 assault on the Texas coast, which swamped part of the nation’s refining and chemical industry, state lawmakers are looking for ways to prevent devastating future flooding.

Supercharged storms are continuing to threaten the Texas coast — home to about one-fourth of the nation’s petroleum refining capacity and a hub for liquefied natural gas exports — and officials there are frustrated with the slow pace of the Trump administration’s response to Harvey.

"We can’t rely on the federal government — they’re our broke uncle," state Rep. Lyle Larson (R), chairman of the House Natural Resources Committee, said at a hearing this week. "If we’re going to fix this, to make sure the refineries don’t shut down, the state has to step in."

Such concerns would grow if President Trump follows through on declaring a national emergency that could divert federal funds from flood protection in the Lone Star State to construction of a wall on the U.S.-Mexico border.

Trump has pushed Congress to allocate $5.7 billion for a wall on the U.S.-Mexico border, a fight that led to a partial government shutdown earlier this year. A compromise spending bill that was expected to pass last night contains about $1.35 billion for the border barrier.

The president plans to sign that bill, but "he will take other executive action — including a national emergency — to ensure we stop the national security and humanitarian crisis at the border," White House spokeswoman Sarah Huckabee Sanders said on Twitter.

While most Texas Republicans support beefed-up border security, many have broken with Trump on the issue of a physical wall. And nearly all of the state’s officeholders, including Republican U.S. Sens. John Cornyn and Ted Cruz, have asked the administration not to divert hurricane relief money (Climatewire, Jan. 14).

The state Democratic Party said in a statement, "We will not let Donald Trump steal our Texas land or raid Hurricane Harvey recovery funds to build his stupid wall."

A half-dozen bills to pay for planning and building flood-control improvements are pending in the Legislature, and Gov. Greg Abbott (R) recently declared flood control a legislative emergency — a move that essentially fast-tracks the bills.

Lawmakers from the energy-rich state say they want to ensure they’re better prepared for floods. Local governments typically don’t have the resources to build large flood control projects on their own.

A recent report from the Texas Water Development Board estimated the state needs $31 billion to $36.6 billion in storm management projects over the next 10 years. Local governments will have an estimated $7.1 billion to $8.2 billion in fees and taxes to pay for it.

Climate change will likely double the probability of flooding in the future, so a once-a-century flood becomes likely to happen once every 50 years, John Nielsen-Gammon, a professor at Texas A&M University who serves as the state climatologist, said at the state House hearing this week.

Perry’s Water and Rural Affairs Committee is also looking to shore up hundreds of dams in the state, after floods last fall left so much debris in Austin’s water supply lakes that local residents were warned to boil their water before drinking (Greenwire, Oct. 29, 2018).

Texas has more than 2,000 earthen dams constructed over the past 70 years that are under the jurisdiction of the Texas Soil and Water Conservation Board. Of those, 611 are considered "high-hazard" because of the risk to people who live below the dams, and 187 need repairs to meet safety standards, according to testimony at a Feb. 4 state Senate hearing.

Perry said the risk is growing as development occurs downstream of the dams. Perry, a Republican from the arid region around Lubbock, said he’s also concerned about ensuring future water supplies to rural areas.

"We have new residents daily, and our supply is not increasing," Perry said at the Senate hearing.

Perry has filed a package of legislation to plan for and build new flood control projects.

S.B. 396 would require the Water Development Board to write a statewide flood plan every five years, in conjunction with regional flood planning groups corresponding to each river basin in the state.

The plan would evaluate the amount of development that happens in 100-year floodplains and rank proposed flood control projects.

S.B. 397 would set up a dam maintenance fund and a flood control fund, overseen by the state treasury.

And S.J. Res. 28 would ask voters to approve a constitutional amendment that would transfer $1.2 billion from the state’s rainy day fund to the newly created funds.

The fund, made up of excess oil and gas taxes, holds an estimated $12 billion, according to the state comptroller’s office (Energywire, Jan. 8).

At least three other legislators have filed bills to establish planning and funding mechanisms for flood projects.

But the state needs more than just new dams and canals, said Ken Kramer, a water policy expert with the Lone Star Chapter of the Sierra Club. Critics have said for years that the state’s flooding is driven by lax development standards, which frequently allowed construction in floodplains.

"What we really need is a comprehensive approach that includes, I think, land-development regulation," along with better planning and funding for construction, he said.

Harvey killed dozens of people and damaged about 250,000 homes along a 300-mile swath of the Texas coast in 2017. It also dumped record-setting precipitation — more than 50 inches of rain pounded parts of Houston, and 60 inches inundated the city of Nederland near the Louisiana border — highlighting the vulnerability of coastal areas to high water.

Not only were the region’s drainage canals unable to handle the deluge, floodplain maps published by the Federal Emergency Management Agency were out of date or inaccurate, leaving many people with an unclear view of the risk they faced.

"Up until Harvey, a lot of my constituents didn’t realize they were in a floodplain," state Sen. Carol Alvarado, a Democrat who represents parts of Houston, said at the Feb. 4 hearing.

About 20 percent of the nation’s refining capacity was shut down for several days after the hurricane, causing gasoline and diesel prices to spike around the country (Energywire, Sept. 5, 2017).

Houston will need $280 million just to match the federal funding for its projects, Stephen Costello, the city’s chief recovery officer, said at the House hearing this week. And the need is even more dire in smaller communities.

"If the city of Houston, the largest city in the state, is challenged coming up with a local match," Costello said, "can you imagine what our rural counties and our smaller cities are faced with?"