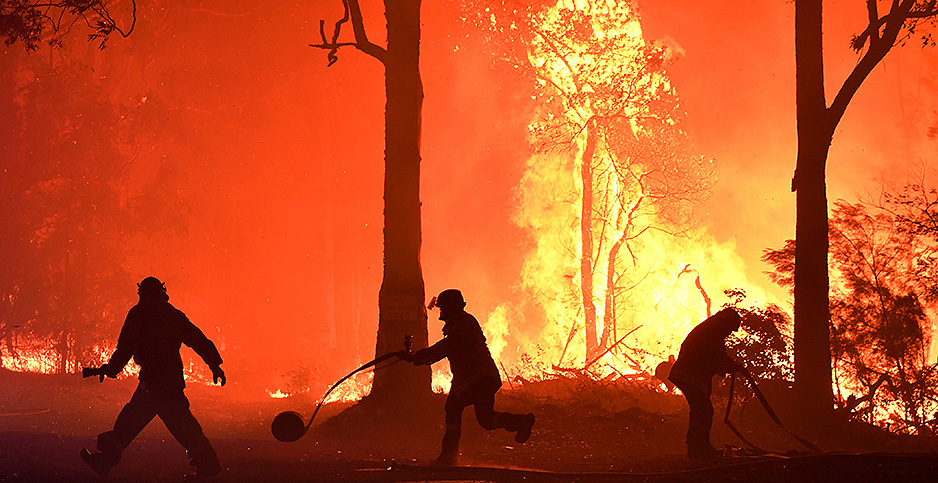 Australia is testing the boundaries of the Paris Agreement as it faces rising threats from bush fire. Stringer/Reuters/Newscom

Australia’s catastrophic brush fire season comes as the country continues to insist on a climate loophole that critics say would undermine the Paris Agreement’s objective of keeping global warming to relatively safe levels.

The fires that began in September were the result of record heat and drought that scientists say is consistent with climate change — and likely to worsen if the world misses its chance this decade to limit warming to 1.5 degrees Celsius. Blazes in New South Wales and other states so far have killed 20 people and up to half a billion animals, leading to fear of extinctions.

But while polls showed growing alarm about climate change, Australian Prime Minister Scott Morrison waited until December to acknowledge the link to "climate change, along with many other factors." He skipped U.N. Secretary-General António Guterres’ climate summit in New York in September despite being in the United States, and his representative ducked out of last month’s U.N. climate conference in Madrid days before it ended.

And while Australia long has been seen as an unambitious presence in the U.N. climate arena, this year it became an outright pariah. That’s because Morrison’s government in the last year suddenly has insisted it plans to use a carbon accounting loophole from the expiring Kyoto Protocol agreement to fulfill its already modest Paris commitments, promising domestic audiences that the accounting trick would limit the pressure the deal would place on Australia’s coal and gas exporting sectors.

That message angered progressive countries at the Madrid confab determined to see progress toward the 1.5 C goal.

"It’s apparent that there are countries that have some legitimate concerns about how to agree and others who don’t have that," Costa Rica Minister of Environment and Energy Carlos Manuel Rodríguez told E&E News in Madrid.

At a meeting in San José, Costa Rica, before the Madrid talks, Rodríguez and representatives from 30 other countries — small islands, progressive developing countries and European Union members — endorsed a set of principles for good carbon accounting. The targets were Australia’s carryover proposal and Brazil’s demands that Kyoto Protocol credits be eligible for trade under the Paris Agreement and for permission to double-count emissions reductions.

As talks in the Spanish capital entered their tense final day, Rodríguez broke from usual practice and called out Australia, Brazil and the United States by name during a press conference. He later told E&E News that he regretted "naming and shaming" the trio but asserted that proposals like Australia’s to use old Kyoto allowances toward a new Paris pledge would threaten the environmental integrity of the deal and put the 1.5 C goal further out of reach.

"A very bad agreement is not acceptable," he said. "A clear understanding that we have these pending issues and that we will discuss them throughout the year is something that can be considered."

But Australia says there’s nothing to discuss. Morrison and his government hold that Australia has the absolute right as a sovereign country to design its nationally determined contribution to Paris as it sees fit. And Morrison rejects charges that it’s unambitious.

"What I’m saying is Australia is meeting and beating our emissions reduction targets," he told reporters when asked about the climate talks at a Melbourne press conference in December.

The origins of the Kyoto ‘Australia clause’

Morrison’s boast stands in contrast to other analytics. A ranking of 61 major economies that came out last month showed Australia with the least protective climate policies.

Indeed, Australia’s claim to current climate action has its roots in the past — specifically, high rates of deforestation in 1990, which added a whopping 131.6 million metric tons of carbon dioxide to the atmosphere before leveling off, according to an analysis by Climate Analytics.

After it agreed to the Kyoto Protocol in 1997, Australia accepted a target of keeping emissions growth to no more than 8% above 1990 levels between 2008 and 2012 — an easy task given that the 1990 deforestation bump artificially raised its baseline 24% above an average year. Australia made the right to carry over the extra allowances a condition of joining a second Kyoto commitment period.

And now the country wants to do the same for Paris.

Australia pledged in Paris to cut its emissions between 26% and 28% below 2005 levels by 2030 but is currently on track for a 7% cut, according to Climate Analytics.

Morrison’s government released estimates based on land use late last year that provided a higher estimate for 1990 deforestation — raising the 1990 baseline above what Australia had claimed before. If it gets credit for Kyoto allowances, Australia need only reduce emissions 14.3% below 2005 levels to claim reductions of 26%.

Most of Australia’s projected reductions are related to land use, not energy or industrial emissions, which are projected to remain more or less flat between now and 2030. By contrast, last year’s Intergovernmental Panel on Climate Change report indicates that the 1.5 C goal would require the world to cut emissions in half by 2030.

It’s also an open question how the 350 million metric tons of CO2 released during this year’s Australian fire season figures into any of this accounting.

Even though Australia’s loophole is globally unpopular, it’s unclear how it can be stopped. There are no consequences for underperforming a Paris commitment, and Australia didn’t show its hand on wanting to use Kyoto-era allowances until after countries agreed to most of the Paris Agreement’s rulebook in Katowice, Poland, in 2018.

Bill Hare, the CEO of Climate Analytics who is himself Australian, said in Madrid that Australian negotiators were telling their foreign counterparts that the carryover provision wasn’t up for debate.

"You can understand the anger about this from the developing world, that will say, ‘OK, here’s this rich country — one of the richest countries on the face of the planet — that has done nothing to deserve these surplus units. Absolutely nothing.’ And then comes along and basically, essentially, holds a diplomatic gun to everyone’s head to say, ‘If you don’t agree with this, we’ll just take it and do it anyway,’" he said.

Negotiators searched in Madrid for a compromise to limit the extent of the allowances Australia could claim, but the language would have been attached to the last outstanding piece of the Paris rulebook dealing with emissions trading. But those talks broke down.

Climate Analytics notes the Paris rulebook’s climate accounting provisions require countries to show that nationally determined contributions are successively more ambitions and represent the highest possible ambition for a country. It argues that Australia would be unlikely to meet that standard and suggests that might be an impediment.

Elliot Diringer, executive vice president of the Washington, D.C.-based Center for Climate and Energy Solutions, said only Australia could prevent itself from claiming credit for these allowances.

"The Paris rulebook is silent on the issue, which essentially means it’s left to national determination," he said.

Recent polling in Australia by firms, including the Lowy Institute and the Australia Institute, suggests the brush fires are pushing more Australians to rank climate change as a top-tier issue. But that’s mostly among voters who are already persuaded — especially the young and those in urban centers.

"That essentially means that it doesn’t necessarily put pressure on the government in the sorts of ways that might actually lead to a significant about-face in policy, particularly when it’s dug its heels in for so long," said Lachlan Carey, an associate fellow on energy at the Washington-based Center for Strategic and International Studies, who is Australian.

Morrison’s policies are still relatively popular among his base. He made protection for Australia’s coal and gas producers a centerpiece of last year’s campaign and has benefited from close ties to Rupert Murdoch’s media empire, which opposes emissions policies.