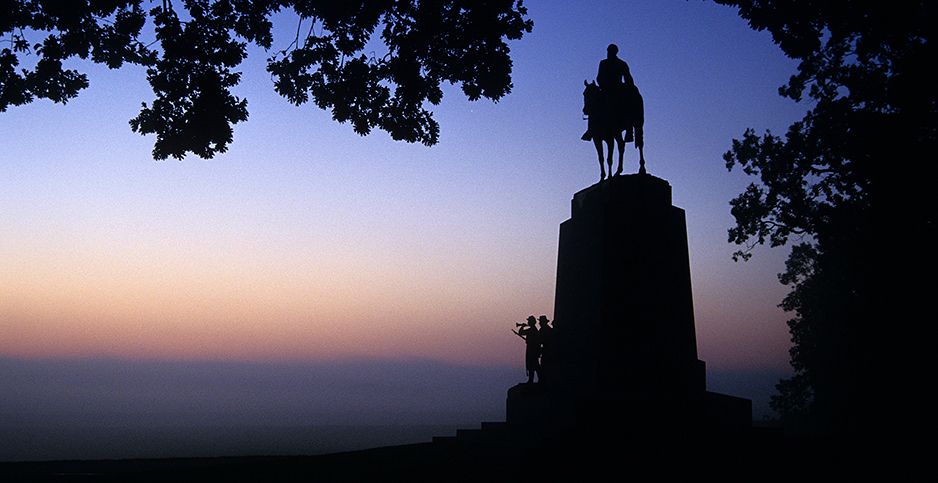 As opposition grows to the public display of Confederate statues, defending them has become an increasingly tough sell for the National Park Service.

But that’s not stopping top NPS officials from trying.

"Our goal is not to help a visitor determine what is right or wrong — our goal is to provide the facts, the information, so that they can do that on their own," David Vela, the agency’s acting director, told the NPS Advisory Board at its last meeting in late June.

For Vela and other backers, the statues serve as "teachable opportunities" to tell the stories of the nation’s most challenging and difficult times.

But for critics, they’re painful reminders of white supremacy and those who fought to protect slavery.

NPS is going against the tide of rapidly changing public opinion. A Quinnipiac University poll last month found 52% of voters support removing Confederate statues from public spaces around the country, and 44% oppose it.

That marked a 19-percentage-point swing since August 2017, when 39% supported the removal of Confederate statues and 50% opposed.

It’s uncertain how many Confederate statues NPS owns and maintains, but a bill passed last week by the House Appropriations Committee would require the agency to compile a full inventory within 90 days. NPS would have six months to remove them (E&E Daily, July 10).

"Our public spaces tell the story of who we are and what we value," said McCollum, who chairs the House Interior, Environment and Related Agencies Appropriations Subcommittee.

On the opposite side of the issue, House Minority Leader Kevin McCarthy (R-Calif.) today introduced a bill that would deny certain federal grants to state and local entities that do not protect their statues (see related story).

"Public monuments are indispensable because they tell the American story," he said. "It is wrong to erase our history. We should be learning from it."

At Gettysburg National Military Park in Pennsylvania, a petition drive is underway urging NPS to put the Confederate statues in a museum, "in order to preserve their artistry and for any racists who still wish to worship them."

Officials at Gettysburg say they’ve got more than 1,325 monuments, markers and plaques that honor those who fought in the Civil War.

"Many of these memorials honor southern states whose men served in the Confederate Army of Northern Virginia," NPS said in a statement. "These memorials, erected predominantly in the early and mid-20th century, are an important part of the cultural landscape."

NPS is facing pressure from one of its top donors to address the issue.

In 2014, businessman and philanthropist David Rubenstein gave $12 million to restore the mansion of Confederate Gen. Robert E. Lee, located high on a hill overlooking Arlington National Cemetery in Virginia. The project involves repairs to two buildings that housed Lee’s slaves and an exhibit that focuses on Lee’s study, where in April 1861 he made the decision to resign from the U.S. Army and side with Virginia in the Civil War (Greenwire, March 28, 2018).

Rubenstein said it’s time to change its official name, "Arlington House, The Robert E. Lee Memorial," to something "that does not offend Americans."

"Today, we live in a time when symbols of racial intolerance need to be removed — and the sooner the better," Rubenstein said in an op-ed published last month in The Washington Post.

NPS spokeswoman Katie Liming said the agency plans to reopen the rehabilitated site later this year with no name change.

"Changing the name of Arlington House, The Robert E. Lee Memorial would require an act of Congress," she said.

Statues of Lee have become a top target for vandals in recent weeks.

At Fort Monroe National Monument in Virginia, protesters used black and yellow paint to scrawl the letters "BLM," for Black Lives Matter, on a marker that identifies the site where Lee lived before the Civil War. An additional petition drive there asks NPS to instead put up a monument honoring Harriet Tubman, an abolitionist who used the Underground Railroad to help free slaves.

At Antietam National Battlefield in Maryland, workers had to clean the paint off a bronze plaque on a 24-foot statue of Lee, sitting on a horse, next to the Newcomer House. President Trump donated his first-quarter salary in 2017 to help renovate the house, which is situated near a bridge that became a thoroughfare for both Union and Confederate troops at the Battle of Antietam in 1862 (Greenwire, Oct. 23, 2017).

And at the Manassas National Battlefield Park in Virginia, vandals last month spray-painted the letters "BLM" on a 1938 monument erected to honor Confederate Gen. Thomas "Stonewall" Jackson. The same monument was damaged in 2017 following a rally by white supremacists in Charlottesville, Va.

NPS began responding to a rash of vandalism that began in late May, sparked by the Memorial Day death of George Floyd, an unarmed Black man who died while in the custody of Minneapolis police. A white officer was charged with second-degree murder and manslaughter after he held his knee on Floyd’s throat for nearly nine minutes, sparking a wave of nationwide protests.

In one of the first incidents, NPS sent its preservation crew to remove graffiti from monuments on the National Mall. At the Lincoln Memorial, vandals painted the words "Y’all not tired yet?" At the World War II Memorial, the message read: "Do black vets count?" And on a building near the Washington Monument, in all capital letters, another message read: "NO MORE BLACK BODIES" (Greenwire, June 1).

Jonathan Jarvis, the NPS director under President Obama from 2009 to 2017, said there’s a middle-ground solution that should satisfy most Americans: keep the statues up only in places where they have a historical context.

"I think a lot of the monuments to Confederates went up specifically as a thumb in the eye to the civil rights movement, and those should come down, no question," he said. "But if the monuments have a historical context within the place they reside, then I think we have to be careful about just yanking them down."

But Trump has made it clear that he wants to leave all statues intact, denouncing those who want to remove them as "thugs" and "criminals" who want to erase U.S. history.

In recent weeks, Trump has made the issue central to his reelection campaign, even signing an executive order on July 3 that would require the Interior Department to create a new national garden featuring the statues of 31 "American heroes" (Greenwire, July 6).

On Sunday, he tweeted that anyone who defaces a statue should be given "an automatic 10 years in prison." And last week, he criticized NASCAR for prohibiting the display of the Confederate flag.

NPS said its policy will be to "mitigate any damage to any statue, monument or memorial damaged to any criminal activity."

That includes the statue of Confederate Brig. Gen. Albert Pike at Washington’s Judiciary Square, which was toppled and set afire by protesters last month. Trump has reportedly ordered Interior Secretary David Bernhardt to put the statue back up after it’s repaired (Greenwire, June 25).

The debate is a familiar one for NPS, which in past years has ignored calls from members of Congress to take down monuments, including both the Pike statue and the Lee statue at Antietam.

Del. Eleanor Holmes Norton (D-D.C.) last week introduced legislation that would require NPS to remove statues in Washington of the Emancipation Memorial at Lincoln Park and President Jackson at Lafayette Square near the White House.

The Emancipation Memorial has drawn fire because it depicts a freed slave kneeling at Lincoln’s feet in a subservient position. Critics say the Jackson statue should come down because he was a slaveholder who backed the removal of most Native Americans from land east of the Mississippi River. U.S. Park Police officers had a violent clash with protesters last month when some of them tried to take down the Jackson statue (Greenwire, June 23).

Some parks have already taken small steps to begin addressing the issue on their own.

In California, Sequoia and Kings Canyon National Parks removed references to Lee from exhibits and printed and online materials. That included a reference to the nearly 255-foot Robert E. Lee tree at Grant Grove in Kings Canyon.

Meanwhile, Vela said his goal is to make national park sites places "for reflection" and for Americans to "have these conversations in a safe place, to talk about why statues are there."

"We’ll own them, and we’ll be part of the conversation," he said.