As Obama exits, GOP hit list is long and sweeping 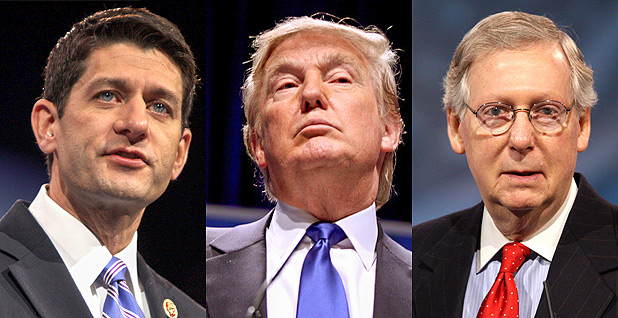 House Speaker Paul Ryan, President Donald Trump and Senate Majority Leader Mitch McConnell are presiding over what could be an overhaul in federal regulations and rulemaking. Photos by Gage Skidmore, courtesy of Flickr.

In the last eight years, President Obama has used his executive authority to move a number of measures to fight climate change, grow the clean energy economy, and protect public lands and endangered species.

Some advocates would have seen him do more, but most agree his environmental record is strong, from the Clean Power Plan and the Paris Agreement to enhanced fuel efficiency standards for vehicles and habitat restoration efforts.

"The Obama administration left an incredible legacy on both climate and energy, especially in the second term," said David Goldston, director of government affairs at the Natural Resource Defense Council. "Really very comprehensively addressing both the climate problem and the need for clean energy."

Republicans and their allies, on the other hand, have spent the same eight years disgruntled and frustrated. They see a number of Obama’s actions as executive overreaches that have stymied the economy and derailed job growth.

"The EPA was captured by environmental special interests whose narrow agenda comports poorly with environmental policymaking as set forth by all these statues," he said, referencing the Clean Air Act, Clean Water Act and Endangered Species Act.

"I assume the incoming administration will be more open, more cooperative, to take more voices into account," he said.

Goldston of NRDC said the Trump administration has indicated it intends to follow through with many of these measures.

"And Congress wants to do even more and weaken the bedrock underlying statues. House Republicans want to shut down the entire regulatory system," he said. "These issues are going to be much higher profile than they’ve been."

He added: "It’s an agenda that’s promoted by a mix of industrial and ideological interests but will benefit nobody."

"All those face such an uphill battle in the Senate," he said. "It’s hard for me to believe that the Senate will have time for long, drawn-out battles on ideological regulatory reform issues, particularly when the Trump administration can accomplish some of those reforms all by itself."

He said the future for many of these environmental regulations is truly unknown.

"Anyone who tells you how all the various environmental matters are going to play out has a much better crystal ball than I do," he said.

But Trump has left little doubt that he plans to scale back as many regulations as possible.

"We’re going to cut your taxes. We’re going to get rid of the regulations that are strangling the economy," he said at a GOP fundraiser in Washington on Wednesday night, according to the new web publication Axios. "I know the biggest businessmen and the small ones that love me and voted for me, and I love them. … Almost every single person that I ask was more excited about the regulations being cut than the taxes, which is surprising. So, we’re going to do that."