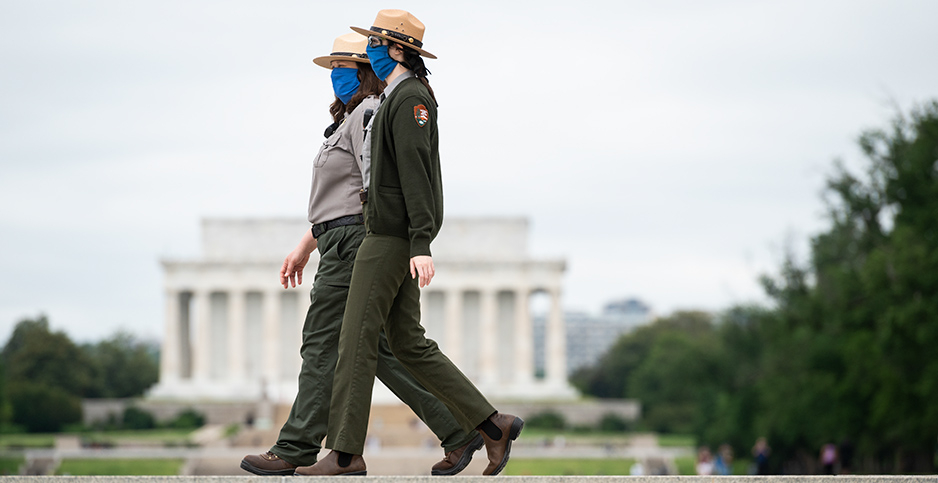 The National Park Service is under growing pressure to step up its protections for employees as its caseload grows at parks across the country. Pictured here are park rangers wearing face masks walking around the National World War II Memorial in Washington on Memorial Day. Bill Clark/CQ Roll Call/Newscom

At the National Mall in Washington, at least four National Park Service employees have tested positive for COVID-19 in recent days as the pandemic hit its highest level yet in the nation’s capital.

And in California, parks this week once again started closing campgrounds and other facilities in response to restrictions imposed by Democratic Gov. Gavin Newsom.

With the pandemic worsening, claiming the lives of more than 3,000 Americans in a single day for the first time yesterday, NPS is under growing pressure to step up its protections for employees as its caseload grows.

Del. Eleanor Holmes Norton (D-D.C.) asked the park service yesterday to close the Washington Monument along with visitor centers and other indoor properties in the National Capital Region "until this wave of the virus has subsided."

She said both employees and the public are at risk at park sites since visitors have not been uniformly following guidelines for masking and social distancing.

NPS officials have declined to disclose the specific number of cases, citing the privacy of employees, but a public health official told the NPS advisory board in September that about 150 staffers had tested positive since March.

The park service declined to provide an updated number.

More employees have tested positive this year as most parks have remained open during the pandemic, complying with orders from both President Trump and Interior Secretary David Bernhardt (Greenwire, May 14).

Park officials say they have tried to keep workers safe by providing them with masks and protective gear, installing plexiglass shields at visitor stations, doing more cashless transactions, and putting up more signs to "encourage safe and healthy visitor behavior," but critics say too many employees have still been left vulnerable.

In a letter to NPS acting chief Margaret Everson, Norton said the latest round of infections shows that employees are getting sick despite safety precautions now in place and that staffers should be allowed to work from home or take leave.

"I understand that there have been at least four cases of COVID-19 and one hospitalization among NPS employees who work on the National Mall," Norton said in her letter. "NPS employees need to be able to protect themselves and their families during this time of crisis."

NPS officials declined to comment on Norton’s letter and would not provide a breakdown on which parks accounted for its cases.

Capt. Sara Newman, director of the NPS Office of Public Health, told the NPS advisory board at its September meeting that the 150 cases constituted "a very low number of infections" — 0.6% of the workforce — considering that 96% of the parks were open. She also said 96% of those infected had recovered.

At the latest board meeting today, Everson offered a brief update, telling members this morning that NPS officials have "learned a lot since March" and have taken steps to protect the public and employees. She said she’s also proud that the agency has been able to keep the vast majority of park sites open.

"We’ve seen campgrounds overflowing, campgrounds that have been able to stay open a little longer. … It’s an important service for the American people and one that our staff has just done a great job at," Everson said.

On its website, NPS officials said they’re continuing to follow the latest federal guidelines "for risk assessment, disease prevention and protection of public spaces and workplaces."

And while the agency said it continues to track confirmed cases of COVID-19, NPS officials added that "we will only provide public information where an employee presented an exposure risk for the public based on [Centers for Disease Control and Prevention] guidance."

Some individual parks have sought to keep the public informed of their caseloads this year.

In their update today, officials at Grand Canyon National Park said 25 of the 28 people who got sick with COVID-19 inside the park have recovered. They also said the number of confirmed cases in the broader Grand Canyon/Tusayan ZIP code area has now hit 85.

Yellowstone National Park in Wyoming and Montana, which has had one of the most aggressive programs for testing its employees, said in October than 16 additional employees had tested positive in September, marking a new high for the park. That included seven NPS employees and nine who worked for concessionaires (Greenwire, Oct. 2).

Many park sites, including the Washington Monument, began closing in March but reopened later. Now as the national caseload soars, NPS may face a new round of closings.

In California, several parks have begun making adjustments in response to Newsom’s stay-at-home order. That includes the popular Yosemite National Park, which closed its campgrounds and hotels to overnight stays Monday.

"While the California regional stay home order is in effect, the park is only open from 8 a.m. to 5 p.m.," Yosemite officials said on the park’s website.