As Pruitt hangs on, deputy pick readies for vote 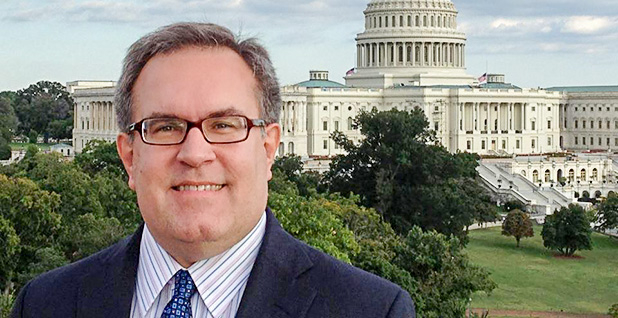 U.S. EPA Administrator Scott Pruitt remains in his job and could soon have his deputy in place — unless controversy overtakes them both.

As early as this week, the Senate could consider the nomination of Andrew Wheeler to be deputy administrator. Majority Leader Mitch McConnell (R-Ky.) set the stage for a procedural vote before recess.

Democrats will likely use floor time slated to debate Wheeler’s nomination to bash both him and Pruitt. If Pruitt goes, they know a confirmed Wheeler would rise in prominence.

A series of ethics allegations have engulfed the administrator, from excessive spending proposals like a bulletproof desk and a charter jet membership to renting a Capitol Hill condo linked to a lobbyist whose firm’s clients have business before the agency.

But by Saturday night, President Trump took to Twitter to express support for Pruitt while also dismissing many of the reports surrounding the EPA chief’s behavior.

And while Pruitt’s personal security spending has spiked compared to predecessors, Trump noted his EPA administrator has "received death threats because of his bold actions."

That security spending has now reached into the millions of dollars. The Associated Press reported Friday the price tag for Pruitt’s personal detail had cost the agency nearly $3 million in pay and travel expenses.

Pressure for and against ouster

With Pruitt in jeopardy, his allies went on a lobbying campaign to save it. Conservative leaders signed onto a letter in support of the former Oklahoma attorney general.

Republican lawmakers, like leaders of the Congressional Western Caucus, put out a statement backing the administrator. And talking points circulated listing Pruitt’s moves to roll back regulations.

Meanwhile, Democrats were calling for Pruitt to resign. On Friday, 64 House Democrats signed onto a letter organized by Reps. Don Beyer (D-Va.) and David Cicilline (D-R.I.) telling Trump the EPA chief had to go.

Some Republicans have also taken an interest in Pruitt’s ethics allegations. House Oversight and Government Reform Chairman Trey Gowdy (R-S.C.) is looking into the condo lease, including asking for both of EPA’s ethics memos.

"The committee has been looking into Pruitt’s condo deal. EPA produced documents to the committee this week, including both the March 30 and April 4 memos," a Republican committee aide told E&E News.

Pruitt’s troubles have only cast greater attention on Wheeler. If confirmed, he would replace the administrator if Pruitt were to get fired or resign.

Wheeler is a familiar face on Capitol Hill, having been a longtime aide to the Senate Environment and Public Works Committee and Sen. Jim Inhofe (R-Okla.).

But one red-state Democratic senator, Sen. Heidi Heitkamp (D-N.D.), has already said she will vote for Wheeler.

"After meeting with Mr. Wheeler and reviewing his record, I’ve decided to support his nomination," she said in a statement.

"I believe he’ll be open to working on issues important to North Dakota in a pragmatic and fair way, and I’ll hold him accountable to make sure he implements the mission of the EPA in a way that works for my state," she said.

Heitkamp was also one of two Democrats who voted to confirm Pruitt. The other was Sen. Joe Manchin (D-W.Va.). A Manchin spokesman told E&E News that he hadn’t discussed with the senator his position on Wheeler’s nomination.

Sen. Susan Collins of Maine was the lone Republican to vote against Pruitt’s nomination. Aides didn’t respond to an email over the weekend asking about Wheeler.

At the moment, EPA has no deputy under Pruitt. Mike Flynn, EPA’s acting No. 2, retired from the agency last week.

"This is one Oklahoman offering another Oklahoman a place to stay until he can find a place," Lankford said in an interview with The Oklahoman, referring to Pruitt’s stay in the lobbyist-linked condo.

Pruitt received tepid support from Sen. Lindsey Graham over the weekend. Asked on ABC’s "This Week" if Pruitt should go, the South Carolina Republican said the EPA administrator had done a "good job" at the agency.

"But the Congress has an oversight role here," Graham said. "And we’ll see where this goes."

Referencing reports that Pruitt’s landlords had trouble getting him to leave after what they initially thought would be a temporary living situation, Graham said the optics were bad.

"The one thing I can say, if you’re the EPA administrator, and two lobbyists change the locks, you’ve got a problem," he said. "The bottom line this doesn’t look good."

Graham was also dubious that the terms of Pruitt’s lease reflected fair-market value. "I don’t think you could get a room for $50 a night," he said.

Speaking on CNN’s "State of the Union," Collins said her opposition to Pruitt’s nomination was validated by the policies he has implemented during his tenure at EPA.

"This daily drip of accusations of excessive spending and ethical violations serve to further distract the agency from accomplishing its very important mission," said Collins.

She too called for congressional oversight but declined to offer an opinion on whether Pruitt should resign or be fired.

"That is a position that only the president can take at this point," she said.

Sen. John Kennedy (R-La.) offered a similar assessment on CBS’s "Face the Nation," while urging Pruitt to hold a "full-blown press conference" to respond to the accusations against him and stressing that "ethics matter."

"To the extent that you are, stop acting like a chucklehead, stop the unforced errors, stop leading with your chin," Kennedy said.

"If you don’t need to fly first class, don’t. Don’t turn on the siren on your SUV just to watch people move over, you represent the president of the United States," he said. "All of this behavior is juvenile, it’s distracting from the business that we’re trying to do for the American people."

McConnell set in motion consideration of several presidential nominees before the recess, including Claria Horn Boom to be a U.S. district court judge in Kentucky. A cloture vote on her is this evening. Others waiting in line include:

The Senate Judiciary Committee will continue weighing legal nominees during a hearing planned for Wednesday.