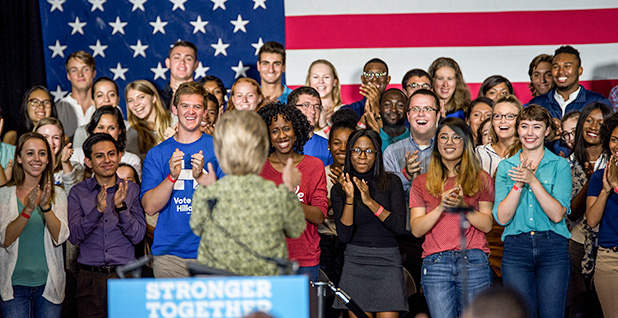 Hillary Clinton is pointing to climate change as one reason for young voters to support her, hoping to soften the negative perceptions they have about her candidacy six weeks before the presidential election.

Clinton sought to convince an audience yesterday at a Philadelphia event for millennials that she’s serious about addressing issues that are important to young voters, like immigration, increasing the minimum wage and combating racial inequality. She also mentioned climate change, an issue that some observers say might be used more effectively by Clinton to woo young supporters.

"If you believe that climate change is real and that we can save our planet while creating millions of good-paying clean energy jobs, join us," Clinton said at Temple University. "If you believe that every man, woman and child in America has the right to affordable, quality health care, join us. If you believe we should finally guarantee equal pay for women, join us."

Her appeal was aimed at the largest voting group by age in the United States, people under 30, and it acknowledges concern in Clinton’s campaign about her performance among young voters. The group that helped propel President Obama to the White House, twice, shows signs of being discontent with Clinton.

When Clinton and Trump were polled head-to-head, the survey said Clinton captured 55 percent of younger voters, compared to Trump’s 34 percent.

The focus on millennials comes after a period in which Clinton has been relatively quiet on climate change, following a Democratic primary race that featured regular attacks on her climate agenda by Vermont Sen. Bernie Sanders. Clinton’s running mate, Sen. Tim Kaine (D-Va.), admitted Sunday during an interview on NBC’s "Meet the Press" that the cool support among young voters threatens success in key swing states like Florida, North Carolina, Ohio and Virginia.

"Yeah, we’ve got to win them," Kaine said. "And let me just lay it on the line. Do you believe in climate science or don’t you? Millennials do. Hillary Clinton and I do. Donald Trump doesn’t. And finally, do you have a plan to deal with college affordability? We have one."

More of those assertions on climate change, and new ones, are needed to energize young voters, said Paul Bledsoe, a Democratic consultant who worked under President Bill Clinton on climate issues. He said the campaign should increase its repudiation of Trump’s suggestions that climate change isn’t happening and tell voters how Clinton plans to address rising temperatures.

"She needs to motivate millennials, not just scare them to death," Bledsoe said. "They’re just not that excited about her vision."

Millennials no different from grandpa

The Clinton campaign said it is ramping up its efforts to attract young voters by sending high-profile surrogates like President Obama, Sen. Elizabeth Warren (D-Mass.) and Sanders to rallies on college campuses and elsewhere.

"Hillary Clinton believes we owe it to future generations to work together to combat climate change, not dismiss it as a Chinese hoax the way Donald Trump has," Tyrone Gayle, a campaign spokesman, said in an email.

The Trump campaign did not respond to a request for comment.

Climate change is not a top-tier issue for young voters, falling behind the economy, immigration and racial inequality, among other things, according to polls. But that doesn’t mean Clinton cannot find an electoral advantage in talking about it, said John Della Volpe, polling director for Harvard University’s Institute of Politics.

He suspects the campaign is targeting one or two subcategories of millennial voters: those who supported Sanders during the primary but haven’t committed to Clinton, and centrist non-whites, like Latinos, who show strong support for protecting the environment.

Polls also show that millennials tend to be less decided about whom to vote for. Many of them are leaning toward a third-party candidate, like Johnson or Stein. So appealing to them in a variety of ways, including on climate, could energize some of them to support Clinton, Della Volpe said.

"They’re very much at play," he said. "For that group, reminding them of her commitment [on climate change] could be very important."

It’s also possible that Clinton’s push will be unsuccessful. The notion that millennials are stronger in their acceptance of climate change than older Americans isn’t borne out in the polls. About the same proportion of young and older voters say the Earth is warming and humans are to blame. About 55 percent of millennials say climate change is real.

"Lots of millennials care deeply about climate change," said Edward Maibach, director of the Center for Climate Change Communication at George Mason University. "The surprising news is they are no more likely to care more than their parents or grandparents."

That might not matter to Clinton. Polls also show that likely voters of all ages are more apt to support a candidate with a plan to address climate change. By talking about the issue, Clinton could convince some people to vote for her, said Maibach.

"That’s a no-brainer," he said. "Virtually all Democrats would like to see action on climate change. The majority of independents feel the same way."