As shale recovers, ‘you’re not going to get everybody back’ 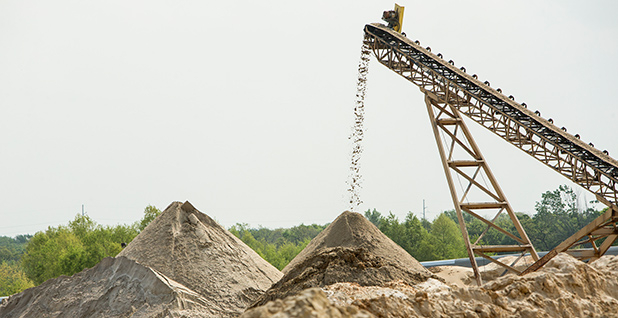 Sand is dropped off a conveyor belt onto a pile at the Superior Silica Sands mine in Kosse, Texas. Demand for sand is booming among shale drillers and in turn has created a number of jobs. Photo by Brett Coomer, courtesy of AP Images.

If there are green shoots to be found in the U.S. oil industry, one of them is at a small sand mine in Pacific, Mo.

Over the last few months, U.S. Silica Holdings Inc. has hired a handful of workers to prepare the mine for around-the-clock operations. The mine now has about 33 workers, according to Steve MacDonald, a business agent with Laborers Local 110.

"They really needed more men because they were working 13 [days] on, one off," he said. "More product’s moving out the door."

That makes Frederick, Md.-based U.S. Silica a rare bird: a company that’s hiring despite low oil prices — maybe even because of them. According to securities filings, the company finished 2016 with about 1,400 employees, up from 1,000 the year before.

The oil slump, which started in late 2014, led to a savage downsizing in the energy industry: more than 224,000 jobs lost since January 2014, according to consultancy Challenger, Gray & Christmas Inc. But as they laid off workers, oil companies devised ways of getting more production with less cash, including blasting their wells with more sand.

Now, as the U.S. industry begins a new chapter of expansion, an open question is whether it needs as many people as it used to. President Trump is confident it will: He campaigned on a promise to roll back regulations, stimulate oil and gas output, and give birth to 400,000 new jobs a year.

But analysts see an industry far less labor-intensive than it was in 2014.

"The reality is that I think we created too many jobs when it was $100 a barrel. The industry at that point, it was nearly impossible to go broke," said Allen Gilmer, co-founder and executive chairman of data-analytics firm Drillinginfo Inc. "And that’s kind of an unsustainable business model. And I think that today it’s really being focused on people that know how to make money and are working at being that lower marginal cost operation.

U.S. crude oil production was 8.8 million barrels per day in January, according to the U.S. Energy Information Administration. That’s the same production figure as July 2014, when oil prices topped $100 a barrel and there were nearly three times as many rigs drilling for oil.

The feat has kept the United States a leading oil producer throughout, as prices bombed into the $20s and rebounded into the precarious $50s today. Today, U.S. shale sits firmly in the middle of the global oil supply curve, and traditional producers haven’t been able to budge it yet.

And it’s largely due to innovations in technology and tactics.

A decade ago, shale drillers focused on buying up land and drilling on each parcel just to keep it. Today, drillers use "pads" that drill in various directions, like a hand that punches underground, then opens.

The "fingers" — each well — are longer, and the gaps between them have narrowed. Each segment of the well is blasted with more water and sand. And the hand can plunge deeper, reaching lower layers of rich rock.

The oil crash was originally expected to make "tight oil" uneconomic. Instead, the producers that survived the crash have recentered their businesses for lower price levels.

"Prices needed to drill new wells in the Permian Basin, SCOOP/STACK and Eagle Ford are below $50 per barrel on average," Michael Plante, senior economist with the Federal Reserve Bank of Dallas, said in a report last month. "As a result, it’s no surprise that these regions continue to attract new rigs and capital week after week."

Oil prices haven’t yet returned to the $80-plus level that producers hoped for, and prices remain sensitive to the fragile accord reached by OPEC.

Even so, U.S. producers are preparing to increase output.

What that means for jobs is unclear.

Before oil prices crashed in 2014, each new land rig spawned 356 full-time jobs in the oil and gas industry, according to Trey Cowan, senior industry analyst with Platts RigData.

When prices crashed, every rig that went offline took 93 jobs with it, Cowan estimated.

Today, how many jobs will a new rig generate? Jesse Thompson, an economist with the Dallas Fed, said it will be lower than before the oil crash.

He said technology has improved and companies have pared their drilling teams down to their "A-Team."

"The extra energy industry jobs, the number of jobs that you get for every extra rig is going to be lower in this next cycle than it was in the shale boom. Because we’re going to be more efficient," he said.

Leading companies in the Bakken Shale are touting "enhanced completions" that pull more oil from each well. Sand has been a key ingredient in their recipes.

During fracking, sand is mixed with water and chemicals and pumped into the well. The fluid shatters the rock around the well bore. The sand creeps into the cracks and holds them open, functioning as a "proppant." Oil and gas molecules seep out.

The average Bakken well used about 4 million pounds of proppant in 2014, according to Drillinginfo. By 2016, that had risen to 6.5 million.

Oasis’ average well got 4 million pounds of sand last year, but in the year ahead, it wants to average 10 million. The company will experiment with 20 million- and 30 million-pound "jobs" this year. Right now, the company’s forecasting a 2017 production that’s 30 to 40 percent higher than last year’s.

‘Do not expect a repeat of employment explosion’

What happens next is of paramount importance in places like North Dakota, which has counted not just on jobs in the energy industry but all the economic activity — in construction, restaurants and services — that spills over.

In 2005, the industry created about 20,200 direct and indirect jobs, according to a recent study by a North Dakota State University economist. By 2013, that number had more than quadrupled.

But by 2015, following the oil crash, the total number of jobs had pulled back to about 72,300. That represents about 17 percent of all jobs in the state today, the study estimated.

What happens next will depend heavily on oil prices, said Dean Bangsund, an economist with NDSU’s Department of Agribusiness and Applied Economics. But he thinks the boom days are through.

"Do not expect a repeat of employment explosion 2010 to 2014," he and Nancy Hodur, another NDSU researcher, said in a December presentation to county officials.

Meanwhile, stocks of sand companies are booming. Financial analysts haven’t had much success predicting the price of oil, but they think that even if prices stay low, U.S. oil companies will continue to demand sand.

According to the U.S. Geological Survey, total production of hydraulic fracturing sand pulled back in 2016 but "remained at historically high levels."

"We estimate sand demand shrunk by 27 percent last year and will expand by 64 percent this year," said the analysts, led by James Wicklund. "In 2017, sand volumes will eclipse the peak of 2014 with a rig count less than half of what it was then."