As storm rages, so does debate over warming 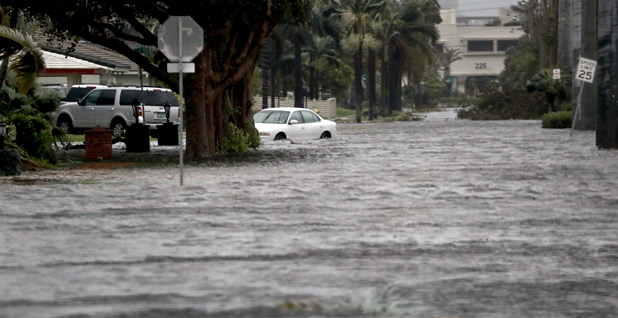 BOCA RATON, Fla. — Residents here watched Hurricane Irma plod toward the mainland and wondered if their luck during this one might be different.

A coastal development boom, coupled with a Republican state government that is ambivalent about climate change, has sharpened city and county preparations for the consequences of rising temperatures, including bigger storms.

In southeast Florida, people were already talking about how to rebuild better, even as some Miami streets were being transformed into broad rivers with wind-whipped waves. On the other side of the peninsula, in the Tampa Bay region — where nearly a century has passed since the last Category 3 hurricane — regional planners had outlined a hypothetical scenario of maximum destruction, code named Project Phoenix.

And in Boca Raton, residents allowed themselves several days to move into shelters, carrying cribs, cots and bags of their favorite potato chips. But these things rarely turn out as envisioned.

Methodical planning for a landfall near Miami, on the east side of the state, gave way to frenzied activity as Irma took an unexpected slump west and then drove north last night past the teeming Gulf Coast city of Tampa.

It threatened to send house-sized storm surges into that city and others overlooking the Gulf of Mexico. People in Tampa scrambled to follow unexpected evacuation orders, and the South Floridians who had fled to the area found themselves fleeing again, this time with fewer options.

"I’ve already packed and unpacked and packed and unpacked like six times over the last six days," Larry Kahn, editor of the Florida Keys Keynoter newspaper, said on public radio as the storm approached, getting emotional as he described people’s plans falling apart as Irma’s forecast path shifted across the state.

Albert Espino, 46, wondered about his decision to ride out the storm in Boca Raton as his family played basketball next to the locked and shuttered City Hall: "I thought about going to Tampa — I’m glad I didn’t go to Tampa."

He lived through Hurricane Wilma, a 2005 storm that hit Florida with 120-mph winds; it destroyed his car. And even though hurricanes have kept a lower profile over the last decade, Espino said he’s confident climate change played a role in Hurricane Harvey, whose waters still cover Houston, as well as the storm that made his neighbors pack up and leave.

"I mean, certainly this year has been more than we bargained for," he said, the wind blowing another palm frond onto the basketball court.

That sentiment won’t persuade many Republicans to shift their thinking on climate change — especially the ones who heard the same rhetoric during the string of strong hurricanes in 2004 and 2005, said Mac Stipanovich, a longtime state GOP operative who worked for then-Gov. Jeb Bush before the back-to-back storms rocked the state.

"At that time, everybody said, ‘Climate change, we’re all going to die, the handwriting’s on the wall’ — then nothing happens for 10 years," he said.

Still, hurricane preparations and recovery are two areas where Florida’s climate-minded officials have bridged disagreements with conservative politicians who discount the scientific consensus on global warming.

Other less glamorous examples include statewide development codes and stormwater planning. The common thread, observers say, is keeping the focus on the tangible effects of climate change without drawing attention to the double-C words.

"I think [state officials are] doing some things quietly. But if you’re in a public meeting, they don’t want to talk a lot about it," said Jane Gilbert, chief resilience officer for Miami.

Gilbert and her counterparts across southeast Florida think it’s going to be easier to talk about climate change in the coming years, and Irma might help accelerate those conversations.

Scientists warn against blaming any particular storm on climate change, and reliable data on hurricane patterns only date to the 1960s, when researchers could begin to draw on satellite data. Another 40 years of storms are needed to draw accurate conclusions about the role that rising temperatures have in cyclones (Climatewire, Sept. 8).

"Those are all factors that we can talk about," said Jim Murley, chief resilience officer for Miami-Dade County.

One of the ways Miami-Dade does talk about warming is through the Southeast Florida Regional Climate Change Compact, a group of four counties that forecast local sea-level rise, coordinate mitigation and adaptation policies, and advocate for more state and federal policies to help their communities deal with the effects of climate change.

The compact offers an important planning tool, and it stands as an example that other regions could follow. But the compact isn’t what locals talk about when the subject of climate change comes up.

As people trickled into a Boca Raton shelter, volunteers chatted about whether Irma would be the storm to finally convince Republicans to take global warming seriously. Each of them came from a county that’s part of the compact. But none of them thought their communities were leaders on the issue. Instead, they all pointed south.

Miami Beach Mayor Philip Levine has taken some of the most aggressive steps in the state to deal with the effects of climate change, outlining plans to install 80 anti-flooding pumps at a cost of about $500 million. Part of that stems from necessity; Miami Beach is one of the most vulnerable cities in the country to rising sea levels.

But Levine’s political profile makes him an imperfect messenger.

"Well, Philip Levine is of course a Democrat — and he’s a possible, if not probable, candidate for governor [in 2018]. So immediately, if you’re a Republican, you’ve got to discount that [talk] and push back," Stipanovich said.

Levine’s office declined to make the mayor available for an interview, saying a storm was the wrong moment to talk politics.

Despite Florida’s vulnerability to sea-level rise, the politics of climate change mostly play out along the established lines.

"There’s the Democrat position, and there’s the Republican position," Stipanovich said. "And all you’ve gotta do is have one of them voice the orthodox opinion of their group, and the others rush in with the opposite opinion."

Climate science advocates might find more company in the Florida GOP than in other states’ Republican parties. Rep. Carlos Curbelo (R-Fla.) co-founded the congressional Climate Solutions Caucus. And Miami Mayor Tomás Regalado has a reputation for calling out other Republicans on the issue. As thousands of his constituents evacuated from Irma’s path, Regalado said the occasion demanded that President Trump talk about climate change.

But those Republicans stand in contrast to most of Florida’s elected GOP officials, including the top two: Gov. Rick Scott and Sen. Marco Rubio. Both those men have taken turns defeating the last statewide Republican seen as a climate advocate. Charlie Crist, who sat in the governor’s mansion from 2007 to 2011, established a task force on climate change, issued executive orders aimed at tightening emissions standards, and laid the groundwork for a greenhouse gas cap-and-trade program.

As the economy tanked, Crist backed away from those stances while seeking the 2010 Republican Senate nomination. Rubio beat him after Crist dropped out of the primary and lost the general election as an independent.

Scott, Crist’s successor, unraveled the climate policies that hadn’t stalled on their own. He disbanded the climate task force and appointed members to the Florida Public Service Commission, which later cut energy efficiency standards for utilities. Crist switched parties to challenge Scott in 2014 as a Democrat, losing narrowly. (He’s now a congressman.)

Florida’s Republican voters have become more inclined toward right-wing populism, and their elected officials have followed suit, Stipanovich said. Scott’s administration reportedly prohibited state agencies from using the term "climate change." He has sidestepped questions about the issue by saying he’s not a scientist. And earlier this year, he signed into law a measure making it easier for locals to challenge public schools’ science curricula.

Regardless, local officials say they’re still able to work with the state on climate change policies — they just don’t call them that. For instance, the state is paying for a large part of Miami’s new stormwater master plan. That’s a key part of the city’s plan for adapting to sea-level rise, but local officials instead stressed the system’s role in flood mitigation when they pitched it to the state.

"I think it’s really the only way we can have a conversation here," said Gilbert, Miami’s resilience officer.

Murley, the county resilience officer, described it as progress that officials are starting to anticipate sea-level rise and higher storm surges for big projects. "That wouldn’t have happened five years ago," he said.

Republicans have helped harden Florida’s infrastructure, too. Bush and Crist helped tighten the state’s building codes. And under Scott, the state makes sure cities account for coastal flooding risk and sea-level rise in their comprehensive planning process, Gilbert said.

"There is no hurricane politics. They’re a bipartisan enemy," Stipanovich said.

Some in the Caribbean might feel differently. The worst of Irma’s winds skirted Puerto Rico, but the U.S. territory still faces cascading infrastructure problems that could leave rural residents without crucial services even as its capital and resort areas maintain electricity, water and health care, The New York Times reported.

Residents of the British Virgin Islands described scenes of destroyed homes and unaccounted-for family members — with little relief in sight as another storm darkens the Caribbean. "My community is facing further devastation in the coming days through Hurricane Jose, which the British government’s aid commitments appear to be ill-equipped to handle," Mark Rowlands, a resident of the island, said by email.

Irma’s death toll had climbed to 25 in the Caribbean. In Florida, more than 2 million people lost power as the storm began lumbering over the mainland. And a report by CoreLogic warned that almost 8.5 million homes and businesses faced at least a high risk of wind damage, with nearly 3.5 million being threatened by storm surges.

Herb Silverstein, 85, has seen five hurricanes. In 1992, Hurricane Andrew narrowly missed him while he lived in Miami Beach, and he remembered emerging after the storm to find "nothing standing."

Sitting in a high school cafeteria, wearing a gray New York Police Department sweatshirt, Silverstein said it was only a matter of time before warming waters sent another strong storm over Florida. "We’ve been lucky for 11 years," he said. "Sometimes your luck runs out."