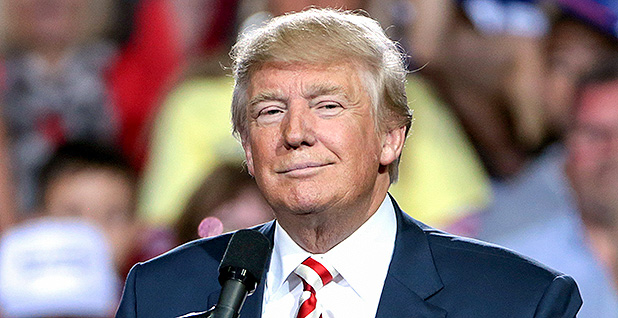 The National Academies of Sciences, Engineering and Medicine will contest incorrect claims about climate change, potentially setting up a collision with President Trump. Gage Skidmore/Flickr

NOAA, the federal agency that studies the Earth, tweeted what appeared to be a rebuttal to Trump’s assertion Monday night that cold weather disproves long-term warming on a planet that’s seen average global temperatures rise about 1.5 degrees Fahrenheit since 1900.

"Not only are severe snowstorms possible in a warming climate, they may even be more likely," NOAA officials wrote in a tweet that appeared to challenge the nation’s top executive.

It came hours after Trump commented on the plummeting temperatures in the middle of the country.

"In the beautiful Midwest, windchill temperatures are reaching minus 60 degrees, the coldest ever recorded. In coming days, expected to get even colder. People can’t last outside even for minutes. What the hell is going on with Global Warming? Please come back fast, we need you!" Trump tweeted Monday.

Federal agencies rarely correct the president on climate science, and it wasn’t clear whether NOAA officials were directly responding to Trump’s tweet. Yet researchers are increasingly concerned about the dissemination of false statements related to rising temperatures.

Now, the type of misinformation embraced by Trump may get a persuasive new antidote from the nation’s science advisers. The National Academies of Sciences, Engineering and Medicine is considering a "quick response capability" to challenge mistruths about climate change. It was one recommendation embedded in a long document meant to help the academies communicate strategically about the risks of warming, at a time when the president reaches millions of Twitter followers with false statements about climate change.

"The National Academies may decide to respond quickly in a variety of situations, including when public statements are made that contain scientifically incorrect climate information and that have the potential to confuse or misinform," the document says. "The National Academies could also decide to proactively communicate quickly when there is significant potential for misinformation."

The plan does not suggest the academies respond to every misrepresentation, but instead offer corrections within 48 hours. Under the plan, which took months to develop, the academies would respond in order to promote or defend its own studies, for congressional inquiries, and ahead of public events. It would also respond when climate science is "mischaracterized or ignored."

"When climate science is being mischaracterized or ignored, particularly by highly influential individuals or groups, even in cases when the National Academies have not provided a public response in the past," the document says. "This is especially true if few others are responding to the misinformation and if the National Academies’ intervention would make a particular difference."

The group acknowledges that a quick response team, proposed by a committee overseeing the Climate Communications Initiative Strategic Plan, could appear partisan. So the academies will not respond to disputes over policy or budget, just on science, engineering or the health aspects of climate change.

Correcting misinformation on climate would potentially put the academies on a collision course with the political culture of Washington, where falsehoods on climate change are frequently shared. That’s an unusual role for an organization that has a long history of avoiding political mudslinging. The nonpartisan academies were created by President Lincoln during the Civil War, and they have provided scientific and technical guidance to lawmakers for more than a century and a half. It was chartered by Congress in 1863 to be an objective source of scientific advice, as advances in medicine were being deployed to treat wounded soldiers. Its work is considered a gold standard of scientific review.

The academies are not trying to police every piece of climate misinformation or respond in a politicized way, said William Hallman, a human ecology professor at Rutgers University and member of the committee. Yet because they exist to serve as the science adviser to the nation, they should provide the public with the necessary information to correct the record on climate, he said.

"It’s a repository of lots and lots and lots of information about climate," Hallman said. "It’s in a position, perhaps a unique position, to address some of the misinformation that’s out there. It’s got gravitas. So when the national academies speaks, people, and particularly the scientific community, tend to listen."

Scientists can push back on the climate misinformation that routinely spreads on Twitter and other social media, said Sunshine Menezes, associate professor of environmental communication at the University of Rhode Island. Menezes, who was not involved with the proposal, said the response to misinformation has to include more messengers than scientists and journalists. Infographics or memes can resonate with larger audiences, and clergy and business people could be trusted sources of climate science.

"I think we have relied on a relatively small group of people to respond publicly to misleading and inaccurate information about climate change, and those conversations need to be led by a much larger group of people that are getting beyond the choir," she said.

The proposal is not in response to the president’s tweets, said David Titley, who chaired the committee and is director of the Center for Solutions to Weather and Climate Risk at Pennsylvania State University. He said there would be an internal process to determine when the academies should inject themselves into public discourse.

The academies want to be sure that Americans have access to factual information, without getting stained by partisan warfare. As for Trump’s needling tweets, Titley said the best approach is to put the president on timeout.

"It’s sort of like when you have a 2-year-old or 3-year-old, you don’t have to respond every time the kid cries, and we sort of have a kid at 1600 Pennsylvania Ave.," Titley said, speaking for himself and not the academies. "I would frankly ignore him, and I would talk about the facts of climate change. Really, what we should be debating is a solution."