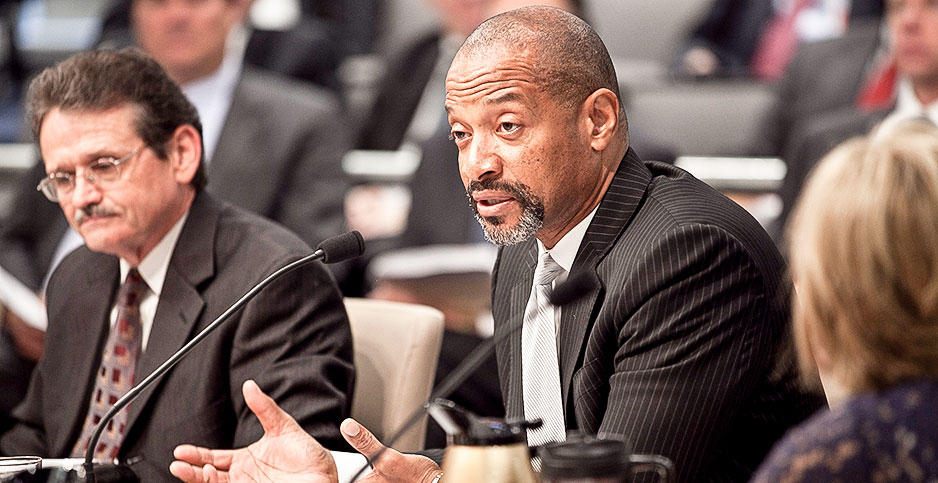 The Nuclear Regulatory Commission, tasked with ensuring safety at U.S. nuclear power plants, faces significant challenges caused in large part by a shrinking industry that has continued to shift in unexpected ways.

Agency officials have responded to the problems of a declining nuclear fleet by committing to being agile and embracing change, but that has been put to the test.

One such moment arose when utilities in South Carolina decided to halt construction on the V.C. Summer nuclear plant in July 2017, making 35 positions at the regulatory agency suddenly pointless.

Those employees were spread out between the agency’s Office of New Reactors at its headquarters in Rockville, Md.; the agency’s Region II office in Atlanta; and site inspectors at the plant in Fairfield County, S.C.

"What we realized was that because the work was going away, we needed to find funded work for those individuals. We needed to eliminate those positions by the beginning of the new fiscal year," Victor McCree, the NRC’s executive director for operations, said in a recent interview.

"We were able to find funded work and reassign those individuals to vacant positions within the agency. That’s a testament to one of the areas we’ve been focused on, being more agile," he added.

The project’s cancellation was unexpected but not unprecedented. The nuclear industry is an "environment subject to change," as McCree called it.

The top career staffer at the NRC, McCree said he’s not afraid of the rapid change and, in fact, is "excited" about the agency’s future.

The agency as a whole has been shedding positions as part of a yearslong "right-sizing" effort. Its staff size has decreased by more than 500 full-time equivalents since 2014, Chief Financial Officer Maureen Wylie said on a recent press call. And the agency’s budget request for fiscal 2019 calls for dropping another 149 jobs (E&E Daily, Feb. 13).

The uncertainty could potentially lead to safety issues, said Dave Lochbaum, a nuclear safety expert at the Union of Concerned Scientists.

When Lochbaum first joined the UCS in 1996, he said, he spoke to the chief nuclear officer of the Maine Yankee plant, which was in trouble and would shut down within a year.

"He said workers were concerned that if they found a safety problem, it might be a last straw … so they didn’t. They were reluctant to raise issues," Lochbaum said. "As the NRC and the industry downsize, will its workers face a similar dilemma … of ‘If I point to this problem, will it put me out of the job?’"

The NRC said that its process protects individuals who wish to raise safety issues and that it promotes a strong safety culture both within the agency and with licensees and other stakeholders.

"We monitor the quality of our work activities which support the agency’s mission, to ensure that they are guided by both our Principles of Good Regulation as well as our Organizational Values," the agency said in a statement. "The NRC’s ongoing assessment of licensee safety culture, and our monitoring of internal safety culture, show no indicators of a diminishment in either category due to NRC and/or industry downsizing."

Some challenges for the agency have come in indirect ways.

Two major utilities, NextEra Energy Inc. and Entergy Corp., recently withdrew unexpectedly from the industry’s top trade association, the Nuclear Energy Institute. NextEra is involved in a lawsuit related to access to a personnel database that it says NEI yanked in retaliation for the utility’s canceled membership (Greenwire, Feb. 5). Companies use the database to meet regulatory requirements from the NRC.

"We are aware of it. We’ve had conversations with representatives from NEI as well as reps from NextEra and Entergy," McCree said. "Our main focus, of course … is to ensure that licensees of the facilities that Entergy and NextEra operate remain safe and secure, and comply with our regulatory requirements."

William Ostendorff, a former NRC commissioner who left the agency in 2016, said overall the agency’s direction is "solid," but a few factors will be telling.

One key test for the agency will be how it responds to applications to license advanced technology, he said. NuScale Power has a design application for small modular reactors currently in the hands of the NRC, which is reviewing the design over an estimated 42-month period.

"I think that is a very important project to watch, both for how the NRC handles it, as well as how NuScale responds to requests for additional information. A lot will be learned from that particular effort," Ostendorff said.

He said the agency’s flexibility on new technology might also need some help from Congress — for example, in regard to its fee structure. The agency is required by law to collect 90 percent of its operating costs from licensees.

"There’s an inherent pushback from industry for good reason, not wanting to pay for NRC staff to get smart on new reactor design," said Ostendorff.

Lawmakers have discussed legislation in recent years that would alter that structure, removing the 90 percent requirement and imposing fee caps on individual reactors, but bills have stalled.

Lochbaum agreed that the agency is headed the right way but warned that it has to remain vigilant, particularly as the nuclear industry tries to squeeze savings where it can.

"With both the industry and the regulator cutting back … there need to be strong metrics so that if either makes cuts in the wrong area, that gets flagged before it leads to an accident," Lochbaum said.