At Cape Hatteras, they’re waiting for the next house to drop 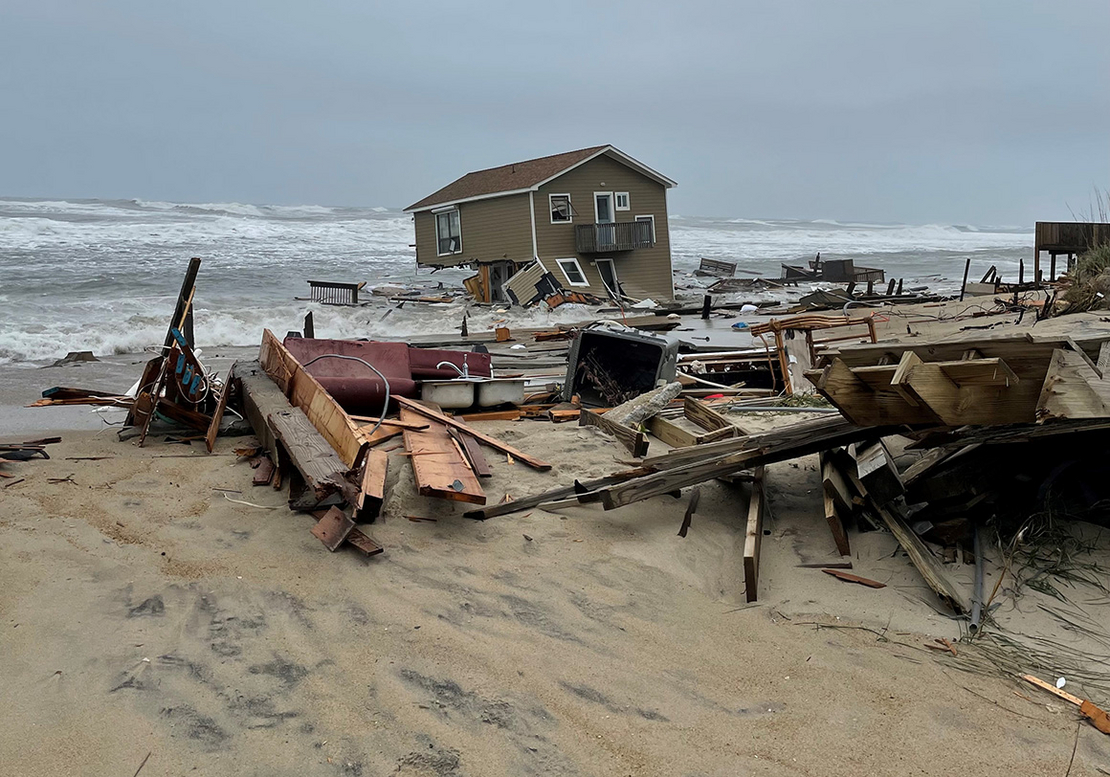 A collapsed house in the Atlantic Ocean at Cape Hatteras National Seashore, N.C., in May. National Park Service

As he geared up for another busy summer season at Cape Hatteras National Seashore last week, Superintendent Dave Hallac surveyed a short 2 ½-mile stretch of beach and didn’t like what he saw.

Despite a massive cleanup after a pair of houses collapsed into the Atlantic Ocean in Rodanthe, N.C., on May 10, small pieces of debris remained buried in the sand (E&E News PM, May 17).

“It’s a mess,” Hallac said. “It’s a very sad situation right now. … There’s tar paper, pieces of wood, nails, pieces of insulation, foam, drywall, carpet padding. And it’s funny because you might not see much, but if you get down on your hands and knees and just start pulling your hand through the sand, you realize a lot of it’s already covered up by the sand.”

Hallac’s headaches may soon multiply: With the North Carolina beach eroding at a fast pace, officials say it’s all but certain that other homes will soon crumble into the sea and add to the pollution at one of the National Park Service’s most popular sites.

Worse yet, nobody’s figured out a workable way to prevent it from happening.

Similarly, Hallac warned that more beach houses could collapse “in the near future.”

If it all sounds like a not ideal way to run a seashore, Outten is quick to agree.

“There’s a lot of silliness going on,” he said.

For starters, Outten said, insurance companies won’t pay property owners to move their houses and will only pay for damages after the homes collapse.

He said buyout programs also are a difficult political sell because they’re perceived as subsidies for the rich, while courts have blocked local government plans to seize homes, even if they’re deemed unsafe.

“Everybody has a different incentive to act differently than what standing from afar we would all think to be the appropriate course of action,” Outten said.

As officials wait for the next house to collapse, Hallac said NPS is exploring its legal options and in the meantime is just trying to be “a good neighbor” and work with property owners to convince them to move the houses before it’s too late.

Hien Pham, a Knoxville, Tenn., real estate agent who owned one of the houses that collapsed in Rodanthe earlier this month, said he paid $275,000 for the two-story four-bedroom home at 24265 Ocean Drive in November 2020.

Pham said he’s “heavily involved” in the cleanup. He said he hired a private contractor to assist in the work and that he got a permit months ago to be prepared.

“It’s beach erosion; everybody knows it’s happening along the coast,” he said.

Hallac said the park service had written a letter to Pham and roughly a dozen other property owners asking them to take preventive action before their homes collapse.

“What we wrote to him and requested is, ‘Please don’t let that happen; please remove it or move it before it collapses,’ because once it collapses, the damage is done,“ Hallac said.

Hallac said the park service is doing more research on property lines as the beach continues to erode and that he’s uncertain whether the agency will try to force homeowners to act because “we’re not sure that we can.”

Outten said the county wants to work with the federal agency but said NPS first has “a big legal process they’ve got to do in Washington, D.C.,” to decide how to proceed.

Pham said he did not want to make any additional comments on what happened because it could affect “ongoing claims and legal issues,” but he acknowledged that his house quickly became famous after a video of the collapse quickly went viral.

“Famous for wrong reasons,” said Pham, adding that watching the video was “the hardest thing to swallow at this moment.”

“For most people, it’s probably entertainment, but not in my eyes,” he said.

Hallac said the video, which was shot by park ranger Mark Seaman, had already been seen by more than 20 million people on Facebook and Twitter. The ranger had gone to the site after the first house collapsed earlier in the day and happened to be in the right spot when Pham’s house began bouncing in the waves and crashed (Greenwire, May 11).

With debris spread out over a 15-mile stretch, Hallac said the cleanup will continue for weeks and that the collapsed homes could affect swimmers, surfers and beachgoers as the summer season begins.

“There are a lot of impacts,” Hallac said, adding that exposed septic systems could pose another risk. “Our beaches are important nesting areas for imperiled shorebirds and also sea turtles. In fact, it’s not unusual for us to have more than 300 sea turtle nests at the seashore.”

“There are also obviously aesthetic impacts — people don’t expect to come to a national seashore and see fragments of home debris all over the beach,” he added.

“What do they say? Dilution is the solution to pollution,” he said. “You don’t want to dump that into the ocean, but when it does happen, it dilutes quickly and the salt water kills the bacteria quickly, so whatever problem occurs is localized and it doesn’t last very long.”

The seashore has become increasingly popular in recent years, drawing 3.2 million visitors last year — nearly as many as the 3.3 million who went to Yosemite National Park in California — and ranking No. 23 among all of the 423 NPS sites in attendance.

So far, three homes have collapsed this year, with the first occurring in February. Last week, the park issued another advisory, warning visitors to wear hard-soled footwear on the beach between Rodanthe and Salvo.