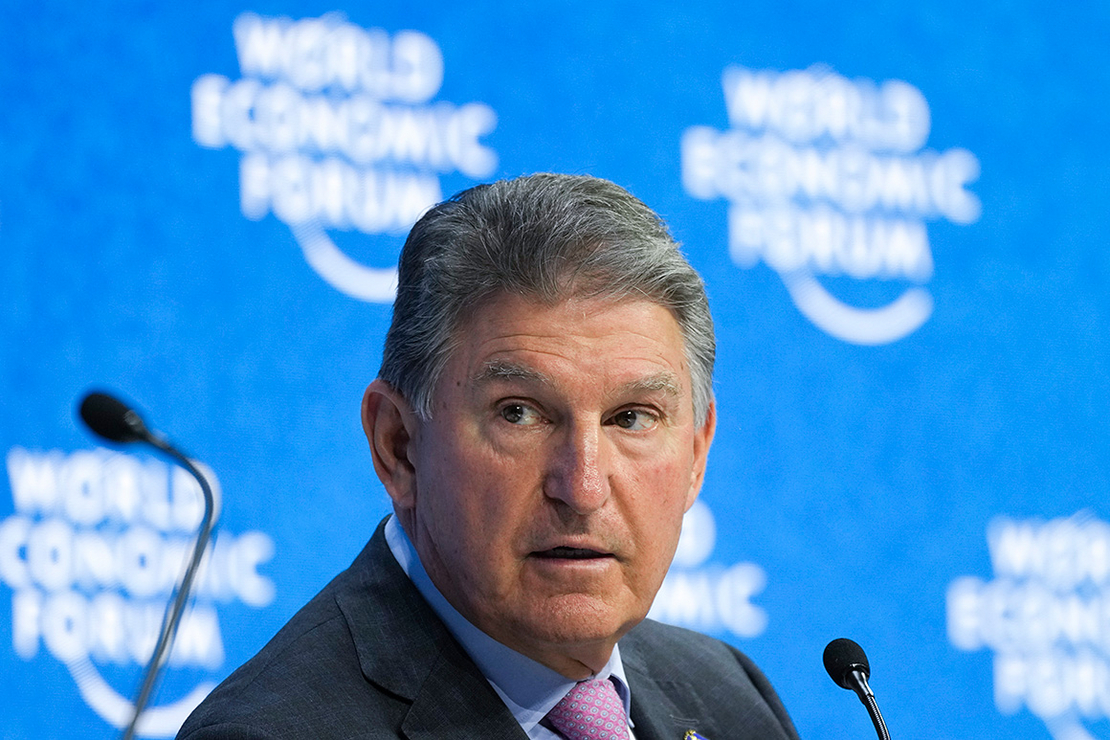 Sen. Joe Manchin continues to envision legislation advancing this year to tackle inflation, drug pricing and climate change — but with an emphasis on fossil fuels.

In remarks yesterday at the World Economic Forum’s annual meeting in Davos, Switzerland, the West Virginia Democrat said there is “a responsibility and opportunity that we can do something.”

Manchin, who chairs the Senate Energy and Natural Resources Committee, listed three major priorities: inflation and deficit reduction, lowering drug prices, and energy and climate. On the latter point, Manchin said, “You can’t do one without the other.”

“The United States of America has an abundant supply of natural gas and oil,” Manchin said. “And we can use our fossil and the cleanest technology humanly possible to make sure that we are reliable, we have reliability and we have security.”

The comments are in line with what he has said previously. Manchin has broadly sketched out his stance on how President Joe Biden’s agenda should proceed in the months since he announced his opposition to the $1.7 trillion “Build Back Better Act.” But he did outline a potential deal for Democrats on a revamped party-line budget reconciliation bill.

On climate, Manchin said, “we have so much more that we can do.”

“But you can’t do it by abandoning the fossil industry that gives us the ability to have reliability and security, not just for our nation, but what the world is needing today,” he added.

Democrats have tried to keep their hopes alive for “Build Back Better” in conversations with Manchin and in public. Senate Majority Leader Chuck Schumer (D-N.Y.) has been meeting privately with Manchin on inflation, the most important priority for the West Virginia Democrat in a potential reconciliation bill (E&E Daily, May 19).

Manchin has also been leading meetings on climate and energy talks with a bipartisan group of lawmakers. The group could meet again this week, but those talks are nascent, and a deal that could garner the 60 votes needed to clear the filibuster would be a heavy lift in the 50-50 Senate with midterms approaching (E&E Daily, May 18).

‘Time is not our friend’

Negotiations on a “Build Back Better” revival have been muted as Congress approaches Memorial Day, the informal date by which Democrats had hoped to have a new deal. Democrats generally have tried to stay quiet about their conversations with Manchin after talks blew up publicly last year amid a spat between Manchin and the White House.

“I am aware that there are a lot of very positive conversations going on amongst the 50 of us about what that would look like, on climate, but also on the other things that we want to try to accomplish as well,” Sen. Tina Smith (D-Minn.), a leading climate hawk, said yesterday during a virtual event with Evergreen Action.

Even as the party scrambles to find solutions to sky-high oil prices ahead of the midterms, an infusion of money to oil, gas and coal could prove a tough pill to swallow for some Democrats. Indeed, House Democrats spent much of last week passing legislation to investigate oil companies for price gouging.

As Smith put it, however, “Time is not our friend here.”

“We need to agree to what we can agree to, recognize that there are going to be some things some of us think would be really good ideas that are not going to make it in,” Smith said. “And we just need to accept that and get what we can get.”

“I’m not going to be more specific about it than that because sometimes, less attention paid to all of that, the better, but I will just say to everyone listening in that … I’m very optimistic that we can reach agreement here,” Smith added.

Manchin also used the stage at Davos to make a case for permitting reform, a talking point progressives and environmental groups have long despised.

“If we do not change our permitting process, we will not be able to change and transition into a cleaner technology and a cleaner environment and be self reliant,” Manchin said.

Manchin added that he is concerned about a transition to electric vehicles while the United States still relies on China and other autocratic countries for many of the raw materials needed for batteries.

That concern has become a major focus for him in ENR Committee hearings, and Democrats have shown a new eagerness to spur domestic critical minerals production after Russia’s invasion of Ukraine upended supply chains (E&E Daily, May 18).

“The North American continent has the ability to be the energy juggernaut of the world,” Manchin said. “If we have Canada, United States and Mexico, with the amount of critical minerals that we have deposits in those three countries on one continent working together seamlessly, we will absolutely reduce our dependency on Asia, on China.”

Still, while Manchin needled and stripped down the climate provisions of the “Build Back Better Act” during negotiations last year, he is not seen as a major obstacle to the bill’s roughly $300 billion in clean energy tax credits (E&E Daily, May 19).

If passed into law, those incentives would be the linchpin of the Biden administration’s climate policy, and analysts say they could go a long way toward hitting the president’s goal of decarbonizing the power sector by 2035.

But Manchin warned yesterday against making that kind of investment without support for fossil fuels.

“We have the ability to go down two paths of passive investing in some of the technology that’s going to be needed for the transition that will happen,” Manchin said. “But eliminating one and for the other one, that’s the European model that Germany followed. It wasn’t successful. We should not repeat that.”