At Hot Springs, buy a beer, fix a park 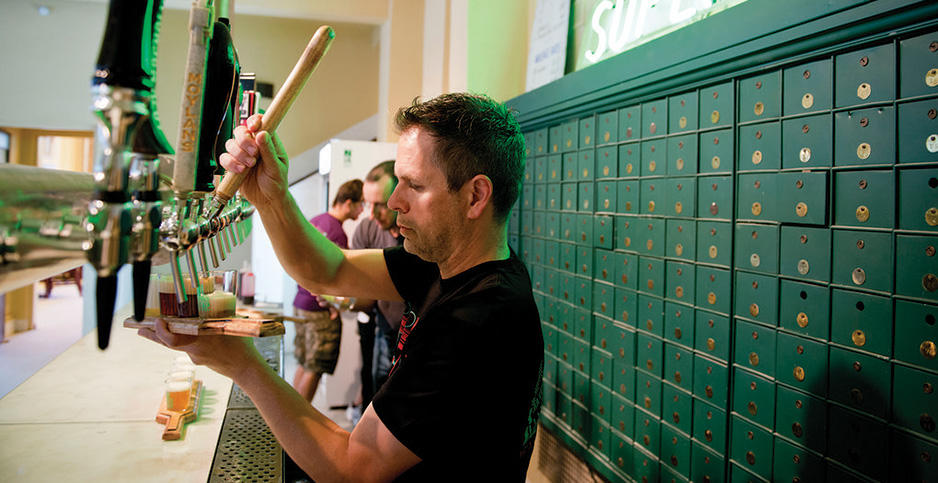 Having a beer at the Superior Bathhouse Brewery in Arkansas’s Hot Springs National Park helps to lower the maintenance backlog. National Trust for Historic Preservation

Here’s a reason to buy a beer at the Superior Bathhouse Brewery in Hot Springs National Park: It could help lower the maintenance backlog facing the nation’s parks.

The brewery, a first in a national park, pays $20,000 a year in rent, but park Superintendent Josie Fernandez says there’s an added bonus: The cost of repairs gets pushed off to the tenant.

"The moment that we sign a lease, all of the deferred maintenance just disappears," she said. "Not only have I leased the property, but now I look like a genius because my numbers are down."

The little brewery in Arkansas got some attention recently on Capitol Hill as an example of how parks can lease their assets to get more revenue to pay for deferred maintenance.

"It’s something that we should look at in other areas," P. Daniel Smith, deputy director of the National Park Service, testified at a hearing of the House Natural Resources Committee.

Smith told lawmakers that leases currently are done on a case-by-case basis, but that it’s "certainly the way the agency is moving."

Leases represent a small but rapidly growing money source for the National Park Service, which had 160 leases in 2017.

Overall, the leases brought in $9.3 million in revenue last year, nearly a 50 percent increase since 2013, according to Jeffrey Olson, a spokesman for the National Park Service.

But even then, it’s still a tiny fraction of what’s needed to tackle the swelling backlog, which now totals $11.6 billion.

At Hot Springs, Fernandez said she felt compelled to act as soon as she began her job as park superintendent in 2004, with historic buildings "sitting there empty and falling apart."

The park still has $12.3 million in maintenance projects, most of it for delayed road repairs. But Fernandez is happy that a spa occupies one of the once-vacant buildings, while a boutique hotel is expected to open in another of the buildings later this year.

"I have learned to be a realtor or a negotiator," Fernandez said. "It made perfect sense to me. But I had to become smart about it as I went along."

Rep. Bruce Westerman (R-Ark.), chairman of the Natural Resources Oversight and Investigations Subcommittee, said the Hot Springs project has not only reduced the maintenance backlog but also helped fill an empty building and trim the park’s overall heating and cooling costs.

Westerman has some personal experience with the subject, too. His congressional office is another of the tenants at the Hot Springs park, paying $17,000 a year in rent.

Fernandez said the lease money can help pay for maintenance or other park needs.

"Twenty thousand here and $20,000 there, the next thing that happens is you have a bunch of seasonal rangers, for example," she said.

The leases are not universally popular.

"These kind of business arrangements are not their forte — otherwise, they’d be in business," he said.

And he said that having parks look to tenants for income could increase commercial pressures: "Parks would start to resemble Disneyland: They’d have tiki bars and amusement rides and whatever would help pay the rent."

The brewery in the Hot Springs park boasts that it’s the first in the world to use thermal spring water as its main ingredient. The 144-degree water is used to create brews such as the Hitchcock Spring Kolsch, a German-style ale, and Killer Irish Red in honor of a St. Patrick’s Day classic.

Katie Windham, the brewery’s general manager, said business is good and that plans already are in the works to add a beer garden, which requires approval from the National Park Service.

"We have to work closely with the federal government," she said, adding that the process can be "more time-consuming."

But she said the brewery now offers the very best people-watching spot in all of Hot Springs.

"These buildings are beautiful — breathing life back into them is a beautiful thing, too," Windham said.

As for Fernandez, she plans to retire at the end of the month, though she figures another job may soon call.

"I might come back as something else, as a brewmistress or something," she said.