‘At last, we have a deal’: Senate voting today on $2T stimulus 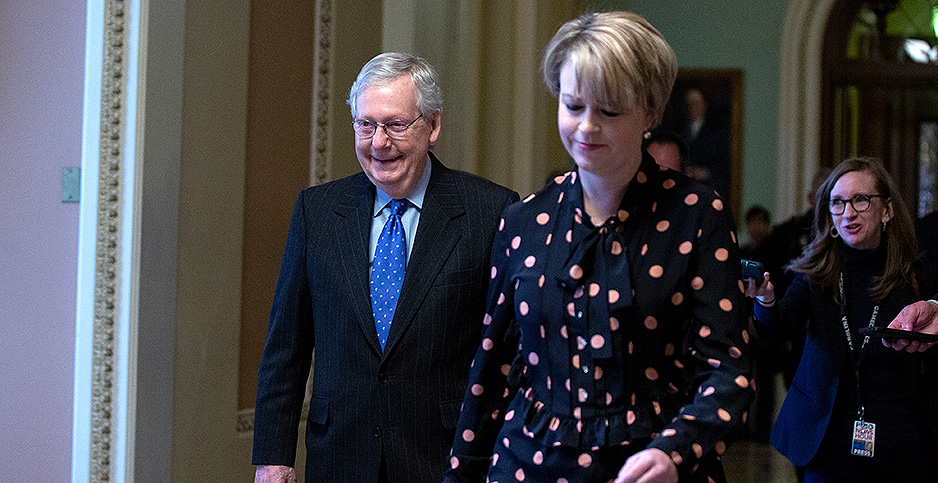 The Senate is expected to vote today on a massive stimulus package worth $2 trillion in response to the coronavirus outbreak.

The legislation would be the third pandemic response bill in recent weeks, and took nearly a week to negotiate amid partisan bickering between Democrats and Republicans.

"At last, we have a deal," said Senate Majority Leader Mitch McConnell (R-Ky.) early this morning. "After days of intense discussions, senators reached a bipartisan agreement for a historic relief package for this pandemic."

The legislation includes a payment of $1,200 to most Americans, expanded unemployment benefits, business tax relief and loans.

"Democrats have had two primary goals: a Marshall Plan for public health workers and hospitals on the front lines and putting workers first," said Minority Leader Chuck Schumer (D-N.Y.). "The agreement, now after these five days, reflects those Democratic priorities."

According to a letter Schumer sent to Democrats, the deal does not include $3 billion sought by Republicans and the Trump administration to fill the Strategic Petroleum Reserve (SPR).

Other Democratic wins would boost the Disaster Relief Fund by $30 billion and increase emergency transit funding by $25 billion.

While the deal has limits preventing airlines from receiving aid from buying back stock and boosting CEO bonuses, Schumer’s letter does not reference aviation carbon limits sought by some Democrats in recent days.

Nor does it address clean energy tax credits sought by renewable sectors, environmentalists and Democrats but ridiculed by Republicans this week.

Tempers flared yesterday on the Senate floor, as Republicans grumbled over the lengthy negotiations forced by Democrats.

"They are leveraging the misery of the American people for political advantage," said Sen. Bill Cassidy (R-La.) during floor remarks before midnight.

The president this week, like other Republicans, criticized Democrats for pushing environmental priorities in the legislation, but he was relatively muted as negotiations went on.

Both House Democratic and Republican leaders are keen on approving the legislation as soon as possible, but how they’ll do that remains to be seen.

The discussions include having the chamber vote by unanimous consent or voice vote. However, that means restless members on both sides must agree to accept the Senate bill with little or no debate.

Lawmakers have yet to release the bill text and timing of the Senate vote. McConnell said during his remarks this morning, "This is a wartime level of investment."

Both the House and Senate are looking to future stimulus packages, and numerous environmental and activist groups sent lawmakers a new letter with their requests.

And several progressive lawmakers, including Rep. Alexandria Ocasio-Cortez (D-N.Y.), are joining environmentalists in a livestreamed event today calling for a "People’s Bailout."