At V.C. Summer, a portrait of an industry in transition 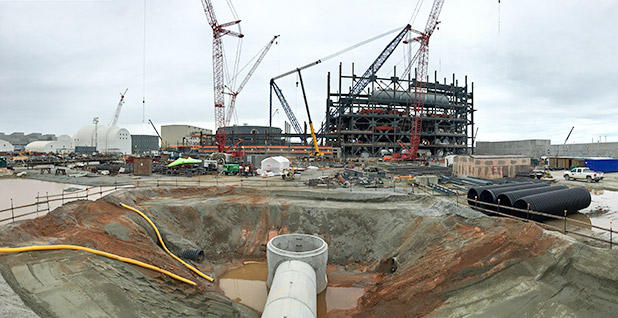 South Carolina Electric & Gas and Santee Cooper are building twin nuclear reactors in Jenkinsville, just north of Columbia, S.C. The reactors, now scheduled to start producing electricity in 2019 and 2020, will boost SCE&G's nuclear output to 30 percent. Executives from both companies tout nuclear's emission-free electricity as one way that will help attract new industry to the Palmetto State. Photo by Kristi E. Swartz.

But when the twin 1,117-megawatt reactors start producing electricity, they will have an arguably bigger impact for their owner, South Carolina Electric & Gas.

The reactors will boost SCE&G’s nuclear output to 30 percent. And the V.C. Summer units 2 and 3 also will significantly contribute to cutting the utility’s emissions by more than 50 percent below 2005 levels, Scana CEO Kevin Marsh said.

Without them, South Carolina would not be able to meet its emission-reduction requirements for U.S. EPA’s Clean Power Plan, Marsh said.

These reasons, combined with long-term economic benefits, are why Marsh said he would make the same decision to build nuclear that he did in 2008 — even with the scheduling delays, cost increases and criticism that come with both.

"I feel strong today, probably stronger today, that this is the solution for us for a clean energy future," Marsh told a room of reporters at SCE&G’s first media day at V.C. Summer in three years. Executives openly discussed the project costs, contractor problems and changes going forward. They also talked about jobs and the state’s new position as a leader in clean energy.

In three years, the V.C. Summer construction site here has transformed from a shell of a structural project to one that has cooling towers, buildings and transformers. Workers also set the reactor vessel in late August.

The reactors are scheduled to come online in 2019 and 2020, and the electricity they produce could flow to more than half the state. This is because V.C. Summer has two owners — Scana and Santee Cooper, a public utility — that provide electricity to a combined 70 percent of the Palmetto State.

The two utilities co-own Unit 1, which means they have been working together and operating nuclear projects for decades.

"I don’t believe we can overstate the importance that these two units have for our state," said Lonnie Carter, president and CEO of Santee Cooper.

How we got here

The project is a snapshot of the electric industry in transition. Marsh told that story by explaining the company’s decision to go with nuclear in 2008.

SCE&G recognized that it eventually would need new baseload power, but the company wanted to shy away from fossil fuels because of looming environmental regulations, he said. At the time, the utility was getting roughly 66 percent of its electricity from coal and 30 percent from natural gas.

Marsh said he knew the coal figure needed to drop, but he also didn’t want the one for natural gas to go higher.

Once units 2 and 3 are on the grid, Scana’s energy mix will be a fairly even split of 30-30-30 for coal, natural gas and nuclear. The remaining 10 percent is for renewables, which include hydropower.

Scana signed a contract with Westinghouse Electric Co. in 2008 and went to state utility regulators. The state also enacted a law that allowed the utility to recoup financing costs from customers as the units were being built.

More than a dozen electric companies lined up with applications for the Nuclear Regulatory Commission to build reactors at that time. All but a few of those applications are still in the queue; cheap natural gas and flat electricity demand have made nuclear projects uneconomical.

Atlanta-based Southern was the first to receive a license to build and operate nuclear reactors in more than 30 years. Scana received its license shortly after. The Georgia and South Carolina sites are almost identical, and the projects are being built in tandem, which has proved important for many reasons.

V.C. Summer and Southern’s project, Plant Vogtle, are using Westinghouse’s AP1000 reactor design. They also are using the same contractors, which started with Westinghouse and the Shaw Group.

Scana and Southern are working together on technical operations and licensing procedures so they are standard between the two projects, said Steve Byrne, Scana’s chief financial officer. When it comes to the contractors, Westinghouse now is working on the same schedule — June 2019 and 2020 — for both sites, he said.

"We don’t have any ego over who’s first," Byrne told EnergyWire.

Regulatory red tape and a host of contractor challenges have delayed the projects by three years, tacking on significant costs. Chief among the problems were parts that weren’t shipped on time or to the stringent quality needed for a nuclear reactor.

This led to some components being built elsewhere, including Newport News, Va.; Tokyo; and even at the Summer construction site, Byrne said.

"Our workforce is accustomed to nuclear issues," Byrne said. "We couldn’t do it for everything; it would be too much."

Meanwhile, a series of contractor changes and lawsuits hung over the project. The delays took their toll in the form of a 21 percent cost increase. V.C. Summer now has a price tag of $13.8 billion, up from $11.4 billion. This includes a $2.4 billion increase in construction costs, executives said.

Two key changes have taken place in the past year. The first was a settlement between the project’s owners and contractors last fall. This ended the ongoing lawsuits and made Westinghouse the main contractor.

Fluor Corp. was hired as a subcontractor, and Scana executives said construction pace has picked up since that time. Fluor also is hiring roughly 100 workers a month.

"We think we’ve got the right team in here now," Byrne said.

The second step was Scana changing the contract to a fixed price. State utility regulators must approve that as part of a larger settlement. The South Carolina Public Service Commission has scheduled a hearing on the issue for Oct. 4.

"We have established significant cost certainty," he said.