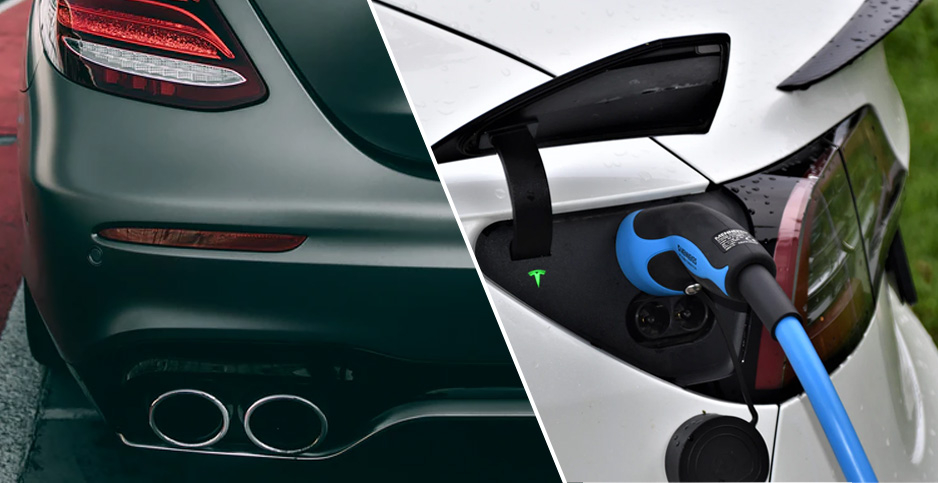 Big automakers have recently boasted about the benefits of their upcoming electric vehicles. They are in the opening stages of a juggling act to sell both EVs and gas cars at the same time. Roland Denes/Unsplash(car exhaust); Waldmar Brandt/Unsplash(ev car)

As Ford Motor Co., General Motors Co. and Volkswagen AG recently have unveiled marquee electric cars, they have let slip a remarkable admission for companies built on oil: Electric models will in some ways be superior.

Volkswagen has described its upcoming ID.4 SUV as a combination of its best cars. GM suggests future electric vehicles will be "more responsive than its internal combustion equivalents." Ford says its electric F-150 will transform tailgating parties, while being cheaper to own, and faster and more powerful than any truck it’s ever made.

These claims may not surprise EV owners: The vehicles are quiet, require little maintenance, are cheaper in most places to fuel and can rocket off the line from a standstill.

But until now, the major automakers have been loath to say so. Embracing EVs is a treacherous pivot in a highly competitive market where traditional automakers must compete against one another while also fending off new electric vehicle makers like Tesla Inc. and Rivian Automotive Inc. — companies that aren’t burdened with a legacy to protect.

The foundation of the global automotive market is still the internal combustion engine, and despite the billions of dollars that car companies have committed to building EVs for the future, today’s balance sheet depends on selling the gas-powered ones on the lot.

"More automakers are starting to say out loud that EVs are better in some ways," said Chelsea Sexton, an auto analyst and advocate who famously skewered GM in the documentary "Who Killed the Electric Car?"

While all traditional global automakers are moving toward electric vehicles to some degree, it is GM and Ford, the largest U.S. automakers, and VW, one of the world’s largest brands, that are doing so most publicly in America.

In the span of the next two years, Americans will see Ford electrify the country’s longtime bestselling vehicle, the F-150 truck, and the storied Mustang brand with the Mach-E. GM aims to reinvigorate the Cadillac with an electric crossover called the Lyriq and roll out an electric version of the Hummer, which was once the stereotype of the exhaust-spewing SUV.

Meanwhile, Volkswagen is pinning its U.S. hopes on the ID.4, the first in what is expected to be a long line of EVs and a transition away from its diesel scandal five years ago (Energywire, Sept. 24).

Marketing experts said that companies like GM, Ford and VW are walking a tightrope by trying to get customers excited about the new product without diminishing enthusiasm for the old. They are at the early phase, when the electric models are promised but not yet delivered.

"How do you still sell the internal combustion engine cars when you’re trying not to disparage them as you sell EVs?" asked Reid Carr, a marketing expert and CEO of Red Door Interactive who has worked on EV programs.

Companies in other industries have navigated contradictions: the Coca-Cola Co. has unleashed Diet Coke and Coke Zero without killing off its sugar king. Burger King has introduced the Impossible Whopper without abandoning beef patties.

But there have also been cases when technology companies with complex products failed to catch the wave at the right time. Polaroid Corp., the famed maker of instant film, perished in the transition to digital photography. Sony Corp., once the king of the CD and Walkman cassette players, lost its music mantle to Apple Inc. and Google.

The electric transition puts incumbents like Ford, GM and Volkswagen at an empirical disadvantage, according to a study by business researchers at the University of Pennsylvania and the University of Southern California.

Looking at utilities transitioning to clean energy as an example, the study found that the value of a firm disrupting itself often declines as the company stretches in two directions.

"Ironically, those incumbents potentially most threatened by the change seem to be least rewarded for their efforts to renew themselves," the authors said.

Ford is the automaker that has ventured furthest to compare its future EVs to its current models with gas tanks.

Its electrification push has been underway for several years: It is spending $11.5 billion on EVs by 2022, compared to GM’s $20 billion by 2025 and VW’s $35 billion by 2023. All the while, the automakers have made only anodyne statements about EVs’ capabilities.

Some of that continues today. Ford says its Mach-E will deliver "the exhilaration expected of Mustang" without mentioning that the highest-end model of this SUV will go from zero to 60 in three seconds — faster than the Shelby GT500, the fastest internal-combustion Mustang the company has ever made.

Marketing experts said that is the playbook for an incumbent: Don’t knock the old product, but try to attract early adopters for the new market.

In the case of Ford and other automakers, that means bringing the snazziest, high-tech upgrades first to the new product.

"They are going for that complementary market without cannibalizing the original brand," said Robert Amberg, chief marketing officer of Jabian Consulting, a strategic management firm.

For example, the 2021 Mach-E is where Ford will debut over-the-air updates, according to Ford spokeswoman Emma Bergg. It is following Tesla, which for years has had the ability to adjust battery performance, braking and steering and to fix flaws by remote, like a computer.

The Mach-E will also be the first Ford model to get the latest version of Sync, the company’s communication, entertainment and navigation system, and will be the first to allow a customer to pre-configure a vehicle, like setting air conditioning preferences and entering favorite destinations into the map.

Then there’s the Ford F-150 truck, where the car company is most loudly proclaiming that its electric models will outdo all comers, including its own vehicles.

The Dearborn, Mich.-based automaker made a splash last year showing an electric prototype towing a million-pound freight train and recently released another video of an electric F-150 speeding up a 60-degree grade with a trailer.

The electric F-150 is targeted at the truck’s core base of farmers, builders and other hands-on professionals. "It will be a seriously capable, purpose-built tool for serious truck customers," Ford said.

But it didn’t stop there.

The dual electric motors, Ford said, are "targeted to deliver more horsepower and torque than any F-150 available today, the fastest acceleration, and the ability to tow heavy trailers," and will "require significantly less maintenance than a typical gasoline engine, creating more than 40 percent savings for its lifetime total cost of operation."

Ford has also highlighted the ability of new hybrid-electric F-150s to serve as a "mobile generator" and charge energy-hungry devices off the truck itself.

The feature on certain EcoBoost models could, for example, allow a tailgater to simultaneously power a television, speakers, a small electric heater, a blender and a minifridge.

The first hybrid full-size F-150s, with a drivetrain called PowerBoost, have an option to create 7.2 kilowatts, which Ford says provides enough power for the tools to frame a house, including electric saws, drills, an air compressor and floodlights.

Ford has also borrowed a page from Tesla in promoting the "giant front trunk" on the F-150 — referring to the spot under the hood freed up by removing the gas engine’s machinery. Ford has highlighted its tailgating possibilities by circulating a photo of a Mach-E’s nose full of shrimp cocktail.

Ford insists it is not confusing the message as it continues to sell gas cars.

"It is not so much about being bigger or better than [the internal combustion engine], more that electrification brings unique opportunities and we will be optimizing those opportunities and playing to our strengths," Bergg said.

‘The best things … in one package’

GM and Volkswagen are more circumspect in their marketing.

GM’s new electric models include the Cadillac Lyriq as well as the Hummer EV, billed as having the ability to move diagonally in "crab mode" (Energywire, Sept. 16).

So far, its assertions that EVs are superior are limited to claims about batteries.

A few weeks ago, GM issued a statement about its new Ultium battery system, calling it "more responsive than its internal combustion equivalents with precision torque control of its motors for smooth performance," among other benefits.

If it were to make direct comparisons, they would be shocking.

The new electric Hummer is billed to have 1,000 horsepower, which would make it substantially more powerful than the Corvette ZR1, a superfast luxury car that GM states has the "most powerful engine ever offered in a Chevy production vehicle."

The attributes extend to speed. The Hummer, whose chunky profile is the opposite of sleek, will go from zero to 60 in three seconds. That would have it crossing the line almost as fast as the new Corvette Stingray, which GM recently billed as the "quickest in its history."

Then there’s Volkswagen. Two weeks ago, the CEO of the automaker’s American arm, Scott Keogh, introduced the ID.4, an electric compact SUV that is the cornerstone of VW’s ambitions.

"It drives like a GTI, it has the packaging of a Tiguan and the purpose of the Beetle," said Keogh, calling to mind the automaker’s top sporty hatchback, its midsize SUV and its most popular vehicle ever, respectively. "All the best things about VW in one package."

The challenge of disruption will become more intense for traditional automakers as new electric cars and legacy gas cars appear side by side in the showroom — and potential customers start to ask pointed questions.

The signals by Ford, GM and VW are "mostly pertaining to vehicles that aren’t here yet," Sexton, the auto analyst, pointed out.

"It’s one thing when there’s limited risk to your market," she added. "It’s another thing to have it in mass production, put it next to your existing vehicles, and then compare it."