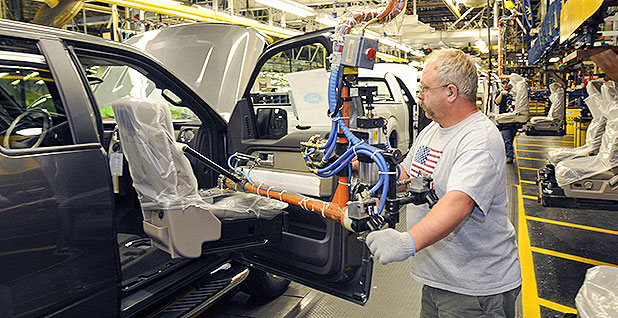 U.S. EPA is reopening a review of vehicle emissions requirements as President Trump flies to Michigan today to tout his jobs agenda with automakers and workers. Photo by Ford Motor Co., courtesy of Flickr.

Automakers are suing U.S. EPA to throw out an Obama-era decision to lock in vehicle emissions standards through 2025, opening the door to lower standards.

EPA and the National Highway Traffic Safety Administration have decided to restart a review of the rules that was meant to be finished in April 2018, according to a notice signed Monday.

The move comes as President Trump promises to dismantle climate regulations and offer relief to the oil and gas industry, but it remains unclear to what degree the administration or automakers are seeking to roll back the rules. A senior White House official said that the administration wanted to put the review "back on track" and that no decision had been made to loosen the standards.

The midterm review, part of a deal between President Obama and automakers in 2010, has become a flashpoint for car companies seeking relief on stringent targets and environmental advocates eager to defend Obama’s climate policies. The Obama administration had finalized the review Jan. 12 in a bid to protect the rules, but automakers complained that the process was rushed because the rules were handed down more than a year ahead of schedule.

Trump is heading to Michigan today to tout his jobs agenda to automakers and workers. He will speak at 2 p.m. at an autonomous vehicle testing center in Ypsilanti (Climatewire, March 15).

The Alliance of Automobile Manufacturers filed a petition to overturn EPA’s final determination with the U.S Court of Appeals for the District of Columbia Circuit on Monday. The trade group called the decision "arbitrary and capricious" and "beyond EPA’s statutory authority."

It was not a final rule, and Obama officials acknowledged that it could be subject to legal challenges.

But environmental advocates have vowed a fierce legal fight if the standards are changed.

"This looks like the car companies are aiming for a sue-and-settle outcome," said Frank O’Donnell, president of Clean Air Watch. "Undoing that determination is really the first step towards undoing the standards."

Reopening the review "could weaken our energy security, harm consumers, and increase global warming pollution," they wrote. "It would also create needless uncertainty for the auto industry and hinder the industry’s ongoing progress."

Wade Newton, an Alliance of Automobile Manufacturers spokesman, said the lawsuit was "procedural" and was filed because of Clean Air Act deadlines. The lawsuit will be withdrawn once the court overturns the determination, he said.

Volkswagen Group of America, although a member of the alliance, did not want to be associated with the filing. That hints at wider disagreement within the auto industry on whether or how much the stringent vehicle emissions and fuel economy standards should be loosened. All automakers have met and exceeded the standards so far, but Volkswagen has been one of the leaders.

The auto industry at large celebrated Trump’s decision to reopen the review.

"The Trump Administration has created an opportunity for decision-makers to reach a thoughtful and coordinated outcome predicated on the best and most current data," Mitch Bainwol, the president and CEO of the auto alliance, said in a statement. "Our industry is committed to producing even safer and more energy-efficient vehicles in the future and that’s what this process is all about."

John Bozzella, Global Automakers’ president and CEO, said he welcomed the administration’s decision and looked forward to working with EPA, the National Highway Traffic Safety Administration and the California Air Resources Board "on a review of the standards that is data driven and accounts for the needs of American consumers without locking in a prejudged outcome."

Automakers have long said the increasingly stringent standards through 2025 are costly and difficult to meet, given the surge in gas-guzzling truck sales, but have not publicly advocated for their elimination.

EPA will now have until April 2018 to decide whether to loosen the greenhouse gas emissions requirements for 2022-25. Pruitt is restarting that review "in order to allow additional consultation and coordination with NHTSA in support of a national harmonized program," according to the notice signed by Pruitt and Transportation Secretary Elaine Chao on Monday.

NHTSA, which sets mileage requirements in conjunction with EPA, is required to issue its own rules for 2025 by the 2007 Energy Independence and Security Act, but has not yet done so. The notice emphasizes that the NHTSA 2022-25 standards will be a "de novo" rule "with fresh inputs and a fresh consideration and balancing of all relevant factors."