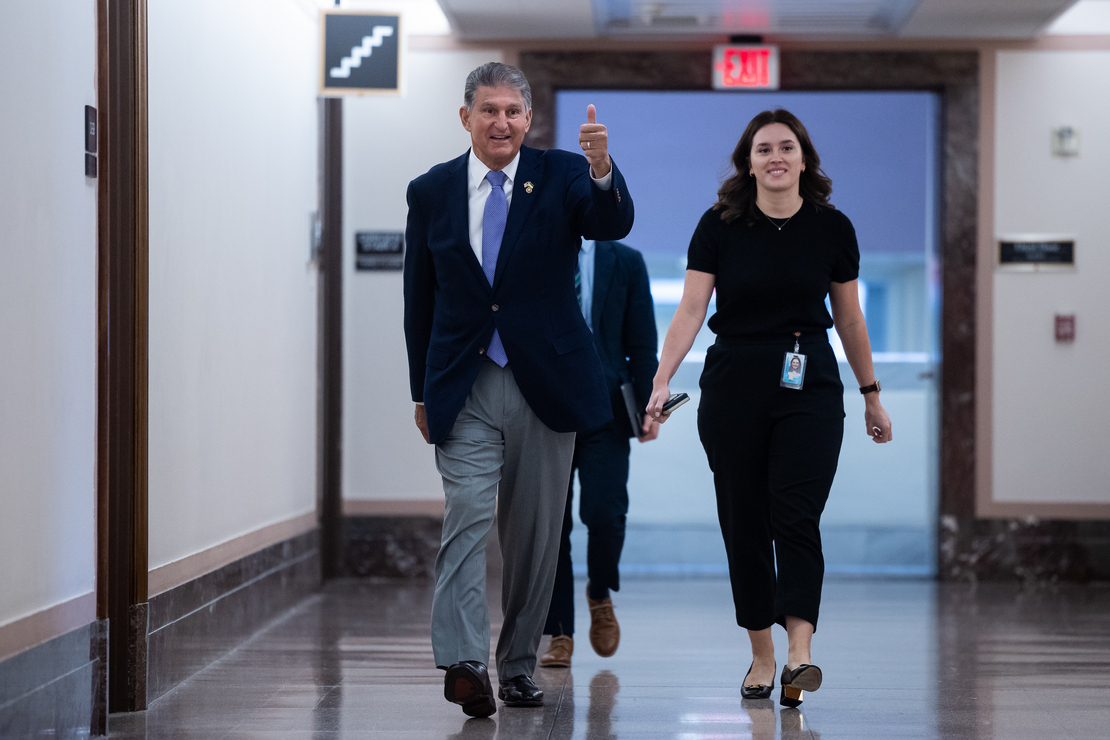 Democrats and environmentalists are giddy with anticipation now that a landmark climate spending bill has a clear shot at passing the Senate. But modeling shows that the “Inflation Reduction Act” wouldn’t cut emissions enough to meet the nation’s climate goals.

So lawmakers and activists are already thinking about the climate policies they want to pursue, even if the bill becomes law. An earlier, more ambitious spending package could provide the blueprint.

“The work that we did in the House on ‘Build Back Better’ says that anything that doesn’t get passed in a reconciliation bill this year — with two more [Senate] Democrats — we could pass it next year,” Rep. Pramila Jayapal (D-Wash.), chair of the Congressional Progressive Caucus, said in a recent interview on an Economist podcast.

Despite important changes to the climate package, experts do expect the new bill to achieve most of the same emissions benefits. The “Inflation Reduction Act” would cut U.S. climate pollution 42 percent by decade’s end, according to preliminary modeling by Princeton University’s Zero Lab. The House-passed “Build Back Better Act,” the analysis found, would have cut it 46 percent.

Meanwhile, President Joe Biden has pledged to slash the nation’s emissions by at least 50 percent over the same period. That would keep the U.S. on track to reach net-zero emissions by midcentury, which is necessary to comply with the Paris Agreement and have a shot at avoiding the virtual collapse of coral reef ecosystems and other climate impacts associated with warming of more than 1.5 degrees Celsius above preindustrial levels, scientists say.

“Let’s not undersell the historic nature of the ‘Inflation Reduction Act,’” said Sam Ricketts, co-founder of the environmental group Evergreen Action, pointing to the bill’s record funding to decarbonize transportation and electricity. “The ‘Inflation Reduction Act’ doesn’t solve any sectoral challenge on its own. But it makes a massive down payment across all of them.”

Still, lawmakers and the Biden administration will have to compensate for the $186 billion that was cut from the bill, Ricketts added, along with further investments in hard-to-decarbonize sectors like manufacturing.

“This doesn’t solve the problem [of climate change] by any stretch of the imagination. Federal policymakers — including Congress — have a lot more work to do,” he said.

Adaptation programs, rather than policies to cut emissions, were whittled down the most in order to finalize a deal, said John Larsen, a partner at the Rhodium Group LLC, a research firm. That’s why the “Inflation Reduction Act” is forecast to cut almost as much climate pollution as the “Build Back Better” proposal.

For emissions, the biggest change to the climate bill was dropping a Clean Electricity Performance Program, which offered payments and penalties aimed at ratcheting up utilities’ share of low-pollution electricity by 4 percent each year. Now, the “Inflation Reduction Act” aims to decarbonize electricity through tax credits — all carrots, in other words, and no sticks.

It’s possible that, with so much new funding for renewable energy, states could find it easier to tighten their own electricity standards to compensate for the lack of a federal standard, said Dallas Burtraw, a senior fellow at Resources for the Future, an environmental think tank.

The priority for climate action in this decade remains the electricity sector, Burtraw added, because decarbonizing sectors like transportation and buildings depends on low-pollution electricity.

“All the pieces are before us for really dramatically reducing emissions for the electricity sector,” he said.

Totally decarbonizing electricity production would take further federal legislation, experts said. But it’s too soon to tell if that will remain the mot urgent climate priority, or if the “Inflation Reduction Act” would make enough progress for U.S. lawmakers eventually to focus elsewhere.

“There’s so many other variables that introduce uncertainty — which is why I think the [Clean Electricity Performance Program] was a really important and well-designed policy, because it was linked to specific emissions reductions,” O’Boyle said.

If this bill does drive deep pollution cuts in electricity, Larsen said, policymakers would then face a set of challenges — such as reducing climate pollution from manufacturing or commercial transportation — that are unlike the electricity sector. That would demand different types of policies than what Democrats developed for this round of climate legislation.

The other major changes to the bill came from shaving down its energy and climate spending to $369 billion from $555 billion. To achieve that, Democrats curtailed some of their priorities, like subsidizing electric vehicle purchases, and nixed some others, like a Civilian Climate Corps (Climatewire, Jan. 28, 2021).

Natural carbon storage also got deep cuts. Agriculture, forestry and rural development programs would get about $40 billion under the “Inflation Reduction Act,” compared with about $82 billion under the House bill, according to the Congressional Research Service.

“The forestry money is not as much as I would have wanted,” Sen. Michael Bennet (D-Colo.) said yesterday at a sweltering press conference in front of the Capitol. “But the billions of dollars that are in here to preserve our watersheds and our national forests, the money that is here to support local rural communities and rural co-ops in their transition — all of that is good news for the American West, and all of that is good news for climate change legislation.”

Democrats might not have to wait long to get another chance at those provisions. Adaptation and natural carbon storage programs could be addressed in the farm bill that must pass next year, Larsen said.

Resurrecting the other discarded “Build Back Better” climate policies might be more challenging. Most political analysts expect Democrats to lose one or both chambers of Congress in the November elections. They currently have just nine more seats than Republicans in the House, while the Senate is evenly split between the parties with Vice President Kamala Harris tipping the balance of power to the Democrats.

If Democrats somehow retain control of Congress after January, they may also look to revive key climate provisions that were dropped from a bipartisan bill that Congress recently sent to the president’s desk, which seeks to make the U.S. more competitive with China. After Biden signs the “CHIPS and Science Act,” it will provide $54.2 billion in subsidies for domestic semiconductor manufacturing as well as more than $170 billion for research programs.

That final package didn’t include $8.6 billion tucked into the House version for the United Nations’ Green Climate Fund, a program that helps developing nations prepare for and respond to climate impacts. It also left out $3 billion that had been intended for a program to boost domestic solar panel manufacturing (E&E Daily, Aug. 3).

Senate Minority Leader Mitch McConnell (R-Ky.) had threatened to kill the CHIPS bill if Democrats revived their climate package, which Sen. Joe Manchin (D-W.Va.) had repeatedly suggested he couldn’t support due to inflation concerns. Then, hours after lawmakers sent the compromise CHIPS bill to the House for final passage, Majority Leader Chuck Schumer (D-N.Y.) and Manchin announced that they’d agreed on the slimmed-down “Inflation Reduction Act.”

Schumer plans to bring the climate bill to the floor this weekend before senators leave for the August recess. He is confident that Democrats can — after more than a decade of coming up short — finally get major climate legislation over the line.

“It’s what the country wants, it’s what the country needs and it’s what Democrats will deliver on in the next few days,” Schumer said of the climate bill. He spoke yesterday alongside Bennett and more than a dozen other Democratic senators as the temperature reached 97 degrees Fahrenheit.

Then last night, Schumer won the support of the last holdout in his caucus: Sen. Kyrsten Sinema (D-Ariz.). To secure her crucial vote, the majority leader agreed to eliminate a $14 billion provision that would’ve forced private equity executives and hedge fund leaders to pay the same tax rates as other wealthy individuals. Private equity firms are among Sinema’s largest campaign donors (Climatewire, Aug. 2).