Backers of GOP resolution pushing back on DOE cuts 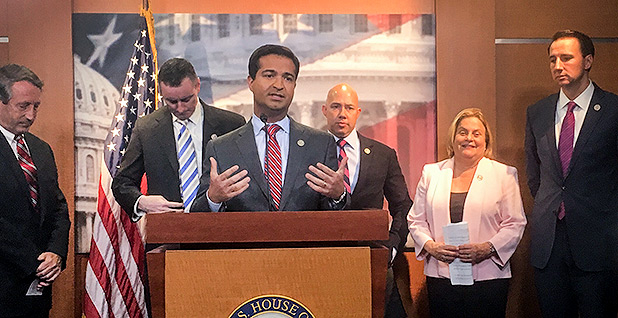 Rep. Carlos Curbelo (R-Fla.) and a small but growing group of Republican lawmakers are active on climate change issues. Photo by Hannah Hess.

The Pennsylvania lawmaker was one of 17 House Republicans who signed onto H. Res. 195 last week, a resolution affirming man-made climate science and calling for some form of action (Greenwire, March 15).

Asked about the prospect for concrete action from the group backing the symbolic resolution, Costello pointed to programs "particularly within the Department of Energy, which we find to be very valuable and viable in terms of clean energy."

Curbelo said to keep an eye out in the coming weeks, as members try to figure out what climate-friendly bills they can propose "that can pass this Congress."

The group of co-sponsors is still trying to recruit other Republicans, he said.

Curbelo predicted that the group would expand to include additional Republicans — out of the House total of 237 — in the next few weeks.

"There are many members who have not yet signed this resolution who are very interested, asking us questions about it, following the news on this issue," he said. "So I’m confident that in the coming weeks and months you’ll see this movement inside our conference grow."

Once the group is set, it will turn its attention to legislation, Curbelo said.

"We know that in order for it to be successful, this process has to be organic," Curbelo said when asked about legislation. He said the purpose yesterday was not to endorse a solution but "to announce and formalize our commitment to this cause."

Supporters have talked about embracing policies that help cut carbon dioxide emissions or adapt to the impacts of climate change.

Last night they unveiled a hashtag as part of their campaign: #ClimateRes.

The Republican climate resolution has helped Curbelo raise his profile as one of the Trump administration’s most vocal GOP critics on climate policy.

Yesterday, his office shared a Friday letter to U.S. EPA Administrator Scott Pruitt asking the agency chief to "re-evaluate" the comments he made during a controversial interview with CNBC.

Pruitt raised doubts over whether carbon dioxide is the main driver behind global warming during a widely panned interview, contradicting the scientific consensus on climate change (Greenwire, March 9).

Curbelo fired back the day Pruitt made the comments, saying it was "reckless and unacceptable" for the head of an agency tasked with the responsibility of helping to lower the impact of carbon emissions to assert otherwise without scientific evidence (E&E Daily, March 10).

Over the weekend, Curbelo appeared on "CBS This Morning" promising to hold the administration "accountable" on the issue of climate. He suggested there are other close advisers to the president and Cabinet members — such as Defense Secretary James Mattis and Secretary of State Rex Tillerson — with whom he could work to get good results (E&E News PM, March 14).

"No one should be questioning the fact that all the evidence, all the science, points to climate change as a result of carbon emissions. So we have to agree on the facts," Curbelo said.

The letter strikes a cordial yet firm tone. It points out that Pruitt’s statements contradict the conclusions "not only of our best scientists but also of your own agency" and briefly outlines predictions about the effects of increased concentrations of carbon dioxide in the atmosphere.

"Reasonable people can disagree about how to respond to the risks of climate change. But there should be little disagreement that it is something that must be done. We must work towards practical, market-based solutions to address this serious issue," Curbelo wrote.

The congressman, who co-founded the bipartisan Climate Solutions Caucus with fellow South Florida Rep. Ted Deutch (D), invited Pruitt to come to his Keys-based district to "see firsthand" the threats posed. Those include rising sea levels and coral bleaching, he wrote.

Curbelo last week led a letter to Tillerson with three Democratic colleagues, urging him to make the case within the Trump administration for sticking with the Paris Agreement (E&E Daily, March 15).