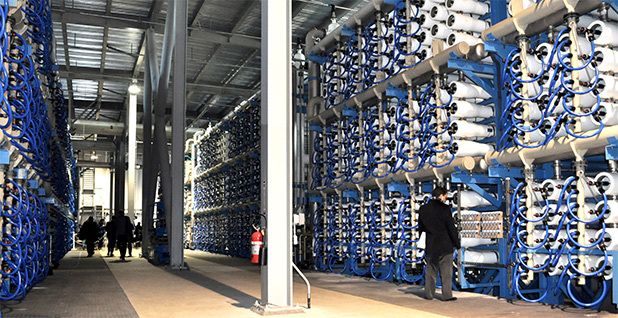 A new desalination plant in Carlsbad, Calif. -- the largest in the Western Hemisphere -- uses reverse osmosis technology in these tubes to remove salt from Pacific Ocean water. Officials hope it is the first of many similar plants in California to bolster the state’s reliable water supply, but environmentalists have concerns about the technology. Photo by Jeremy P. Jacobs.

CARLSBAD, Calif. — At the dedication of the desalination plant here this week, lawmakers heralded the $1 billion facility as a turning point for drought-ravaged California.

State Assembly Speaker Toni Atkins (D) praised the plant — the Western Hemisphere’s largest desalination operation — as "a model … not just for San Diego County, but for other plants up and down the coastline."

But few expect desalination projects to proliferate along the West Coast.

"We’re unlikely to see many more projects on the coast, at least in the near term," said Heather Cooley of the Pacific Institute, an Oakland-based water think tank. "It’s expensive, it’s high energy — which contributes to greenhouse gas emissions — and it has impacts on the marine environment."

Desalination, which uses a series of filters and reverse osmosis technology to remove salt from ocean water, is more popular in other parts of the world, particularly the Middle East.

Saudi Arabia relies on desalinization for most of its drinking water, and Israel draws a quarter of its water from the technology.

And while there are desalination plants in California, none is as large the Carlsbad facility, which will provide between 7 percent and 10 percent of San Diego County’s water.

The Monterey Bay Aquarium has a small plant, for example. Santa Barbara built a facility in the early 1990s during another four-year drought, but it ran for only three months in 1992 before the city mothballed it when the rains returned.

In response to the current drought, voters in 2014 passed Proposition 1, a $7.5 billion water bond measure that authorized the state to spend $100 million aiding desalination development.

The Carlsbad facility, built by Poseidon Water of Boston, was originally proposed during the drought in the early 1990s. San Diego has long wanted it own water supply; it historically imports up to 85 percent of its water from Northern California and the Colorado River.

Poseidon’s facility took about 25 years to finish, enduring more than a dozen lawsuits from various parties, including environmental groups.

Its water is expensive. The San Diego County Water Authority is contracted to buy at least 48,000 acre-feet per year for 30 years (an acre-foot is 326,000 gallons).

San Diego will pay up to $2,300 per acre-foot. It currently pays about $1,200 for imported water. The water district says that will translate to an increase of $5 per month on water bills.

Peter MacLaggan, Poseidon’s vice president leading the Carlsbad project, said this week that the plant is the beginning of a new stage for California water.

"This plant will change the way we look at water in California for years to come," he said.

Poseidon is pushing forward with another facility in Huntington Beach, about an hour north of Carlsbad in Orange County. The company hopes to secure permitting for the project by the end of next year and have it online by 2020.

In addition to that facility and the Santa Barbara plant, there are about a dozen other cities that have considered plants, including Monterey and Santa Cruz in Northern California.

Environmentalists and other desal skeptics say the state should pump the brakes on desalination development.

They point to two examples — one local and the other on the other side of the world. Santa Barbara residents, they note, were stuck paying for that facility when it was shuttered. They are also now footing the multimillion-dollar bill to bring the plant back online.

During its millennium drought in the mid-1900s and early 2000s, Australia spent $10 billion constructing six desalinization plants. Only two are used today.

Environmentalists also contend the facilities have a devastating effect on marine life when they suck in water, then discharge the salty brine. The California Coastkeeper Alliance says the Carlsbad plant will kill 68,000 fish and 1.8 billion larvae annually.

And it also takes a lot of energy to force that water through the reverse osmosis filters that only let water through, removing salt. The Carlsbad facility takes 38 megawatts to operate, enough to power 28,500 homes.

"I don’t see Carlsbad as a game-changer," said Steve Fleischli, director of the Natural Resources Defense Council’s water program in California. "There are definitely other options that need to be considered before jumping on the desal bandwagon."

Other cities are implementing effective water efficiency, recycling, groundwater recharge and even stormwater capture programs that are all much cheaper than desalinization.

"Instead of making these huge capital outlays," he said, "you should see if there are other ways to achieve it in a more cost-effective and environmentally protective way."

There is also some debate about how and whether state regulators should encourage desalinization plants.

For example, water from Carlsbad’s plant — new, locally produced water — has not reduced the amount of water San Diego must conserve under Gov. Jerry Brown’s (D) drought-response mandate that runs through February.

Mark Weston, chairman of the San Diego County Water Authority’s board of directors, said the Carlsbad plant’s water should lessen its conservation requirements.

"If we have mandated reductions," he said, "we ought to be able to meet them by bringing in new water supplies."

Victoria Whitney, deputy director of water quality at the State Water Resources Control Board, said the board will consider that when it considers possible new conservation regulations in February.

But she added that environmental concerns about desalinization will play into those considerations. The state in May passed its first-ever rules for desalination plants, which imposed environmental controls on water intake and brine discharge (Greenwire, May 7).

Whether cities will build plants "depends on where you’re physically located," she said. "Some areas are more water short than others."

San Diego, she noted, has virtually no groundwater aquifer to pull from like many other areas in the state do. Other cities may choose to pursue other ways to boost local water supplies, such as recycling programs.

Desalinization, she said, will be "more of a locally driven initiative."