Ban fracking? Good luck with that, Mr. or Ms. President 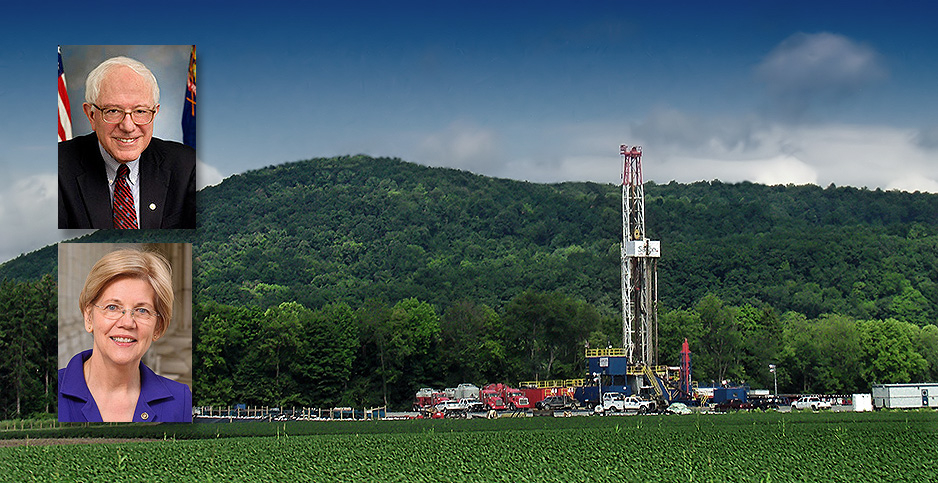 The Democratic presidential candidates who promise to ban fracking are keeping a secret: The president can’t do that.

At least five contenders for the Democratic nomination have called for a "fracking ban" in their plans for fighting climate change and shifting to renewable energy. The slogan appeals to the party’s most left-leaning voters.

But banning hydraulic fracturing would take an act of Congress. And getting Congress to do it would be difficult, even if the Democrats control both chambers.

The oil and gas industry, though, shouldn’t take much comfort from that, energy analyst Kevin Book says. There are still a lot of ways for a president to affect the industry unilaterally.

"This is probably one of those areas where it makes sense to take them seriously rather than literally," said Book, of ClearView Energy Partners.

There are signs the industry is taking the prospect seriously. The energy arm of the U.S. Chamber of Commerce released a report this week warning of the economic effects of ending fracking in New Mexico, where Permian Basin oil drilling is boosting the state’s budget. And the American Petroleum Institute, after an October Democratic debate in Ohio, accused pro-ban candidates of undermining that state’s economy.

And major oil companies are being pressed on what they would do if the federal government were to enact policies to limit or end drilling (Energywire, Nov. 4).

A president could ban new drilling and fracking on public lands, a concept supported by most of the Democratic contenders. That is a stark contrast to President Trump — who has prioritized increased domestic production. It’s also a contrast to former Democratic presidents, including Barack Obama, whose administrations routinely presided over public land drilling. Still, only about 10% of the country’s drilling occurs on federal land.

The administration could also use regulations to clamp down on the industry’s emissions, making it too expensive to operate. But oil companies and others might be able to block such rules, or a public lands drilling ban, in court for years.

With a Congress united behind him or her, a president could enact laws with even more impact on oil and gas production, and that includes banning fracking.

But lawmakers would have to get past the political might of the oil and gas industry, the thousands of jobs in the sector, and voters very sensitive to increases in the price of gasoline.

"We could pass national legislation," candidate and former Vice President Joe Biden said at a CNN forum on climate issues in September. "But I don’t think we’d get … the votes to get it done, to say all fracking goes away now" (Climatewire, Sept. 5).

And "banning" any development would raise questions about whether the government was taking away people’s ability to use their own property. The mineral rights to oil and gas are often held by farmers and other individuals, rather than oil companies. If the government had to compensate the owners of all such rights, the cost could be monumental.

The prospect of such a ban has not been widely examined, even though it could put hundreds of thousands of people out of work. And a sizable chunk of them are in swing states like Ohio and Pennsylvania.

The industry employs hundreds of thousands of employees, but not the millions often talked about. Bureau of Labor Statistics data shows more than 470,000 people worked in oil and gas production in 2018, bringing in wages of more than $54 billion.

One reason for the lack of scrutiny could be the fuzziness of what a fracking ban would look like. And a reason for that is the many different definitions of "fracking."

A plan that ‘ticks all the boxes’

Technically, hydraulic fracturing is a segment of the well construction process in which massive volumes of chemical-laced water and sand are forced down the well to crack open rock and release oil and gas. That’s the definition oil companies and their political supporters prefer.

But many people, particularly industry critics, lump nearly everything about oil and gas production into the term "fracking" — from clearing the well pad to disposal wells and pipelines.

Food & Water Action, an environmental group that is one of the loudest advocates for a fracking ban, defines it as "any unconventional stimulation" of an oil and gas well, said Mitch Jones, director of the group’s Climate & Energy Program. "Unconventional" generally means fracturing combined with wells that run horizontally under the ground.

That combination is what led to the drilling boom that has made the United States the world’s top oil producer.

But that definition would still allow new development of vertical wells, including offshore wells. The offshore industry says only about 10% of its wells are fracked.

Different states have enacted fracking bans using different approaches. New York’s ban still allows low-volume fracking on conventional wells. In 2014, the Empire State’s 12,826 wells produced more than 350,000 barrels of oil and 20 billion cubic feet of gas. A moratorium imposed in Maryland in 2015, however, prevents any kind of hydraulic fracturing, no matter how small the volume.

The only federal legislation to be introduced that approximates a ban was Hawaii Democratic Rep. Tulsi Gabbard’s "Off Fossil Fuels for a Better Future Act," H.R. 3671, in 2017.

Gabbard’s bill, which never got a hearing, would have placed a moratorium on federal permits for "new major fossil fuel projects." Although fracking and drilling wells on private land don’t require a federal permit, approval is often needed for essential infrastructure such as pipelines.

Unlike other proposals, that approach could wallop offshore drilling, if not end it.

Sen. Bernie Sanders (I-Vt.) has the Democratic presidential field’s most detailed plan for banning fracking and dealing with the fallout, Jones said.

"His is the one that ticks all the boxes," he said.

That includes plans for helping those who might lose their jobs. Sanders’ plan proposes spending billions of dollars on what he calls a "just transition." He wants to guarantee five years’ worth of earnings and job training for any displaced worker.

"My enemy is … not the working people in the fossil fuel industry," Sanders said in a September interview with Colorado Public Radio. "My enemy is climate change."

Sen. Elizabeth Warren (D-Mass.) doesn’t have a plan for what to do with displaced oil workers. She has said in interviews and on Twitter she wants to ban fracking, along with ending drilling on public lands on "day one" in the White House. But her long list of plans doesn’t address the aftermath of such a decision. Warren’s campaign didn’t respond yesterday to a request for more information.

Other presidential candidates who say they support a fracking ban include Gabbard, Sen. Cory Booker (D-N.J.), Marianne Williamson and billionaire former hedge fund manager Tom Steyer. Steyer’s campaign says such a ban would have to be done deliberately.

"Tom supports a ban on fracking," Steyer’s campaign said in a statement to E&E News. "He knows we need to push as hard as possible to make the transition as fast as possible, but it is crucial that we do this on a managed, responsible timeline."