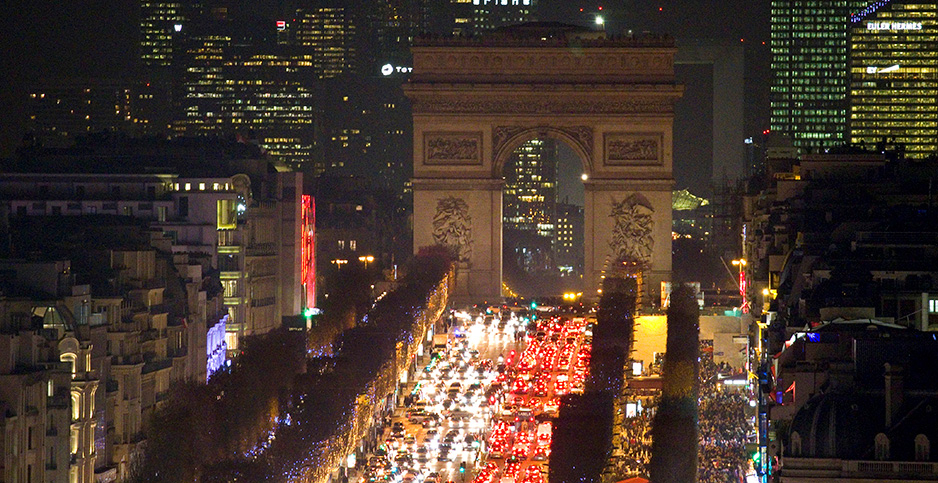 Traffic is seen along the Avenue des Champs-Élysées in Paris, with the Arc de Triomphe in the background. Paris officials are restricting the use of cars in the city. Charles Platiau/Reuters/Newscom

Paris made headlines last week by banning cars from its streets on weekdays.

The move was part of a growing trend as cities around the world take extreme measures to confront climate change and air pollution by cracking down on carbon emissions from cars and trucks.

"The sense that we have to go after transportation emissions at a city level is growing," said Anup Bandivadekar, a program director and regional lead with the International Council on Clean Transportation. "It’s an area that is allowing cities to take leadership."

Here’s a look at five of the most drastic measures.

Mayor Anne Hidalgo rolled out the new policy last week. It’s one of the most restrictive in Europe, affecting approximately 2.7 million vehicles.

Under the policy, cars and diesel trucks made before Jan. 1, 2006, are banned from city streets between 8 a.m. and 8 p.m. on weekdays.

The move comes after a report by the French national institute of public health found that Paris has the worst particulate matter pollution of any European city.

"Public health is at stake," Paris First Deputy Mayor Emmanuel Gregoire said, according to The Times of London. "In Paris, the primary source of air pollution is road traffic."

Other French cities have for years required drivers to display "clean air stickers," which identify their vehicle’s emissions levels.

London has long been considered a leader on reducing tailpipe emissions.

In 2003, the city instituted a "congestion charge zone" to streamline traffic and curb noise and air pollution.

Drivers of older cars that don’t meet the latest European emissions standards must pay €12.50 ($14) to enter the 8-square-mile zone. Entrance is free for fully electric cars, some plug-in hybrids and internal-combustion engine vehicles that emit 75 g/km or less of carbon dioxide.

The ULEV has resulted in a slump in demand for diesel cars, the Financial Times reported.

"We are basically not selling diesels as a retailer," Paul Tanner, managing director of Alan Day Volkswagen, told the publication. "We had a family in the other day and even the children said, ‘Daddy, you can’t get a diesel.’"

Earlier this year, the Big Apple became the first city in the United States to endorse a congestion pricing plan.

Starting in 2021, drivers will pay more than $10 to enter the busiest parts of Manhattan below 69th Street. Exact fee amounts have not yet been decided, but drivers are expected to pay an average of $13 for cars and $25 for trucks.

New York has successfully slashed pollution from power plants, with the goal of achieving carbon neutrality in the power sector by 2040. But transportation has been a tougher nut to crack, said Julie Tighe, president of the New York League of Conservation Voters.

"I would argue congestion pricing is the cornerstone of how we can start changing our transportation policy," Tighe told E&E News earlier this year. "This is going to be something more complex than dealing with the power sector. The power sector is used to being regulated; people are not."

This Scandinavian country leads the world in electric vehicle adoption for a reason.

The Norwegian government enforces a "polluter pay" system, in which the owners of high-polluting cars are forced to pay steep taxes.

In addition, the Norwegian government offers other, nonfinancial incentives for electric vehicle drivers, such as preferential parking and free charging in city centers, said Nic Lutsey, a program director and regional co-lead with the International Council on Clean Transportation.

Partially as a result of these policies, electric vehicles accounted for 58% of all new car sales in Norway in March, according to the Norwegian Information Council for Road Traffic.

By contrast, EVs account for just around 2% of new car sales in the United States.

The Chinese government has made it extraordinarily difficult to drive a gas-powered car.

A thick, toxic smog envelops many of the country’s cities. To improve air quality for residents, six major cities have imposed a cap on registrations of new internal-combustion-engine vehicles.

People who purchase new gas-powered cars must enter a lottery system in Beijing or an auction system in Shanghai. They often wait years and spend thousands of dollars to obtain a registration, which allows them to drive on city streets.

"There are actually anecdotes of people buying a combustion vehicle and waiting years and years and not being able to drive it," said Lutsey of the ICCT.