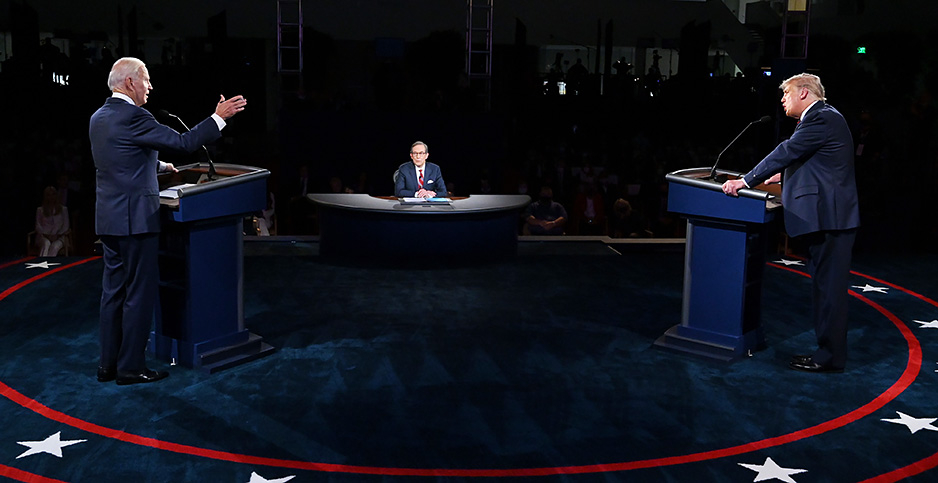 Biden’s defense of his clean energy plan that would involve a massive overhaul of the U.S. power sector came as he parried President Trump’s inaccurate assertion that Biden’s plan to tackle climate change would cost $100 trillion.

Biden distanced himself from claims about the sweeping Green New Deal but said his own plan would address climate change and create jobs. Biden has proposed a $2 trillion infrastructure and clean energy plan, though wild cards on any path forward include how to build long-distance transmission lines to move renewable energy and how widespread battery use may become on the power grid.

"We’re going to be in a position where we can create hard, good jobs by making sure the environment is clean and we are all in better shape," Biden said. "We spend billions of dollars now, billions of dollars on floods, hurricanes, rising seas. We’re in real trouble."

Biden, who has centered his climate action plan as a way to create green energy, union jobs, said the Obama administration’s stimulus plan in 2009 helped efforts to bring down the cost of renewables to compete with fossil fuels.

Trump, who has continually downplayed the role of humans in causing climate change, insisted he wants "crystal clean water and air" and defended his decision to pull out of the Paris climate accord.

"We have now the lowest carbon," Trump said. "If you look at our numbers right now, we are doing phenomenally. But I haven’t destroyed our businesses. Our businesses aren’t put out of commission."

"You can now emit more methane without it being a problem," Biden said, shaking his head. "Methane!"

The exchange came as moderator Chris Wallace unexpectedly asked the pair about climate change (Climatewire, Sept. 30). The subject had not been among the topics Wallace chose for the debate, sparking pushback from activists.

Trump declared energy a dividing line soon after landing in Cleveland for the debate, repeating his inaccurate claim that Biden has called for a ban on hydraulic fracturing.

"Just arrived in the Great State of Ohio," Trump tweeted. "Real Polls have us leading by even more than 2016. With Biden being against Fracking (Energy & Jobs) & your Second Amendment, we should be in very good shape!"

Biden has stopped short of calling for a ban on hydraulic fracturing — though he would oppose new drilling on federal land. Pressed earlier this month during a CNN town hall for taking a stance politically popular in Pennsylvania and Ohio even as he pledges to tackle climate change, Biden said fracking "has to continue because we need a transition" to cleaner forms of energy.

Trump also misrepresented Ohio polls. Three separate polls in the state in the past week have shown Biden with a lead over Trump, who won the state in 2016 by 8 percentage points. That includes a Fox News poll that found Trump 5 points back among likely voters — 45% backing Trump, with 50% for Biden.

With energy a key part of the economy in several swing states, the Trump campaign has relentlessly sought to portray Biden as posing a threat to industry by harboring plans to shut down hydraulic fracking. But although Wallace mentioned Biden’s support for new limits on fracking, Trump didn’t bring it up at the debate.

The fracking battle has played out most fiercely in Pennsylvania and Ohio, where Biden and his wife, Jill, will campaign today by train, stopping in eastern Ohio and western Pennsylvania.

Pennsylvania’s 20 electoral college votes make it the most valuable prize of three Rust Belt states that proved critical to Trump’s 2016 win. He won the state then by fewer than 45,000 votes, and this year the two campaigns have spent more money in Pennsylvania than any other state.

Sen. Pat Toomey (R-Pa.) earlier yesterday told virtual attendees at an event put on by the Marcellus Shale Coalition, a group of natural gas companies based in Pennsylvania, Ohio and West Virginia, that Biden would follow "the left wing hostility" aimed at all fossil fuels.

"The energy in the party is on the extreme left and that’s where he has allowed himself to be dragged," Toomey said, noting Biden’s running mate, Sen. Kamala Harris (D-Calif.), has supported a full ban on fracking.

Speaking at the event after Toomey, Trump’s Energy Secretary Dan Brouillette didn’t mention Biden or Harris by name but warned against "proposals to wipe out every form of energy besides renewables."

"They believe resources are limited and that people are a drain on resources and a burden to our environment," Brouillette said of fossil fuel critics. "In their heart of hearts, they believe people are the problem when in fact, we’re the solution."

Biden has maintained an edge over Trump in most public polls in Pennsylvania, though Trump has maintained significant support in rural, largely blue-collar areas.

Still, two polls this week showed Biden with a lead in the state, including a Washington Post/ABC poll that found Biden making inroads among Trump’s base of white voters without four-year college degrees.

The poll found Biden with 54% support, compared to Trump’s 45% support among likely voters.

Outside the debate, advocates sought to sway voters.

The American Petroleum Institute ran ads during the debate, portraying oil and gas producers as supporters of tackling climate change.

"America is built on diverse views," says one ad. "But we all agree we need climate solutions while meeting our country’s essential energy needs."

The ad ran in key battleground states and across the country on Fox News and CNN, as well as digital platforms, the group said.

A private poll conducted for the Progressive Policy Institute (PPI) found Biden with a narrow lead over Trump in Pennsylvania and Ohio, despite sweeping opposition in both states to a fracking ban.

The poll, by ALG Research, also found Biden running ahead of Hillary Clinton’s 2016 performance in the "shale belt" — the gas-producing counties of southeastern Ohio and western Pennsylvania.

The poll found that voters oppose a ban on natural gas extraction by a 53-point margin with 74% against the policy and 21% in support.

It shows voters split over who they trust more on energy issues but open to Biden’s plan, said PPI President Will Marshall.

"Unlike the ‘drill, baby drill’ right and the ‘keep it in the ground’ left, voters in states like Pennsylvania and Ohio show a deeply pragmatic streak on energy and climate issues," Marshall said. "They are not climate deniers like Donald Trump, and they view natural gas as a bridge, not a barrier, to America’s clean energy transition."

According to the PPI survey, Biden leads in Ohio with 48% favoring him compared to 46% for Trump. Biden has a wider margin in Pennsylvania with 50% support to Trump’s 44%.

Pennsylvania and Ohio rank among the top five states in natural gas production, and the American Exploration & Production Council, which represents large independent oil and natural gas producers, including several with operations in Ohio, touted fracking ahead of the debate.

"Ohio has benefited significantly from the energy revolution authored by the U.S. shale industry — a revolution that is committed to providing our country with high-paying jobs, energy security, and cleaner air," said council CEO Anne Bradbury. "With the support of our nation’s leaders, the State of Ohio can continue to provide vital energy for our nation and support our economic recovery for many years in the future."