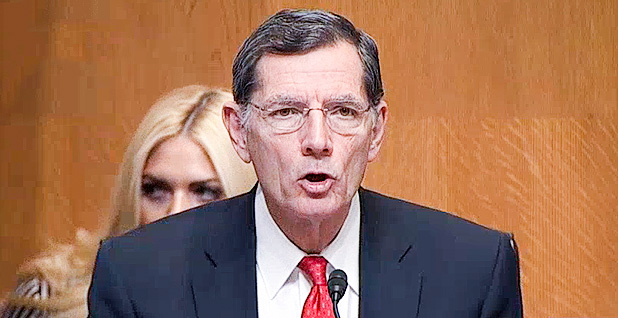 States would get greater input into the federal process for listing endangered species under a draft bill released today by Senate Environment and Public Works Chairman John Barrasso.

The Wyoming Republican’s proposal would expand states’ authority in writing species recovery goals, habitat objectives and other criteria for delisting or downlisting at-risk animals and plants under the Endangered Species Act.

The "recovery teams" could modify such criteria by unanimous votes "based on a material change to the best scientific and commercial data available" with the Interior secretary’s approval, according to a discussion draft of the proposal.

"We must do more than just keep listed species on life support — we need to see them recovered," Barrasso said in a statement. "This draft legislation will increase state and local input and improve transparency in the listing process."

The Interior secretary then would have 90 days to approve or reject the team’s recommendation.

Barrasso’s proposal would also revamp the judicial review process for decisions to delist species under the ESA — a tool that environmental groups use to delay listing changes.

"A determination to delist will not be subject to judicial review until the expiration of the monitoring period for a delisted species," the Barrasso draft says.

Jamie Rappaport Clark, president and CEO of Defenders of Wildlife, blasted the proposal, calling the draft "partisan" and a "reckless power grab designed to wrest away authority from scientists and wildlife experts and give it to states that lack the resources — and sometimes the political will — needed to save wildlife from extinction."

The group also took particular issue with language that would change the judicial review process.

"The Barrasso bill would undercut accountability by exempting federal decisions from judicial review when they fail to meet statutory deadlines for listing species," said a press release from the organization.

"It would delay court challenges for delisting decisions for five years, leaving wrongly-delisted species exposed to hunting, extractive industries, and other significant threats to their existence," it said.

Barrasso, who worked closely with the Western Governors’ Association in drafting the language, has sought feedback on updating the ESA over the last year and a half through hearings and briefings.

The WGA in a Feb. 14 letter to Barrasso praised his efforts to overhaul the 1973 landmark law and said the proposed bill’s provisions were "generally consistent" with the group’s recommendations.

"The Western Governors’ Association appreciates the Chairman’s willingness to productively engage with Governors, and that the Chairman has approached this polarizing topic in an inclusive, thoughtful manner," wrote South Dakota Gov. Dennis Daugaard (R) and Hawaii Gov. David Ige (D).

Additionally, the discussion draft would create a priority system for tackling listing petitions, status reviews and determinations based on the urgency of a species’ survival and conservation efforts "so that resources can be utilized in the most effective manner," said the summary from Barrasso’s office.

The proposed bill would reauthorize the ESA for the first time since 1992.