Barrett says she has no ‘firm views’ on climate change 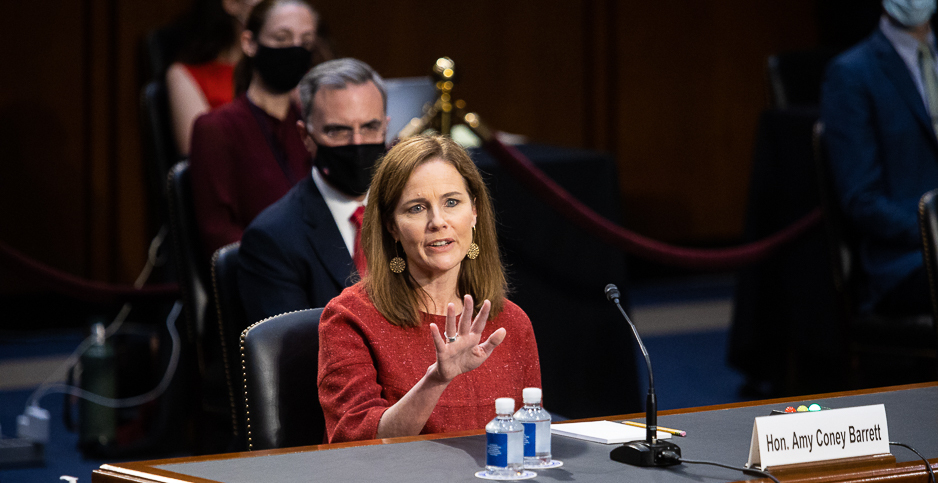 Supreme Court nominee Amy Coney Barrett said she had no "firm views" on climate change during the second day of her confirmation hearing. Francis Chung/E&E News

Barrett’s response came near the end of a marathon confirmation hearing dominated by talk of health care and abortion rights. Sen. John Kennedy (R-La.) elicited a quick answer from Barrett on global warming through an inquiry about objectivity.

"My colleagues seem to think you’re only qualified if you’re dumb, if you have a blank slate, if you’ve never thought about the world," Kennedy began, grilling Barrett in quick succession on whether she’s thought about problems like nuclear energy.

"How about climate change … have you read about that?" he continued. "And you have some opinions?"

"I’m certainly not a scientist," she said after a pause. "I’ve read some things on climate change; I would not say I have firm views on it."

If confirmed, Barrett would be the sixth Republican-appointed justice on the Supreme Court. Her addition could have major impacts on climate and environmental litigation.

Green groups blasted Barrett’s response, taking it as a signal that the potential justice does not accept the scientific consensus that human activity is warming the Earth. Groups that deny or downplay global warming often say climate science is not settled (Climatewire, Aug. 5, 2019).

"Any nominee who wants to be seriously considered for a lifetime appointment to the highest court in the land must — at a bare minimum — acknowledge and accept that climate change is real," said Sierra Club Democracy Program Director Courtney Hight in a statement. "It’s science, plain and simple."

"Millions of Americans are suffering today from the effects of climate-fueled wildfires and hurricanes, while Judge Barrett denies the obvious facts," he said in a statement. "A nominee without ‘firm views’ on climate science should be firmly viewed as unqualified for the Supreme Court."

This isn’t the first time a judicial nominee has dodged climate-related questions by citing a lack of scientific expertise.

Judge Neomi Rao of the U.S. Court of Appeals for the District of Columbia Circuit — a former Trump administration deregulatory chief and skeptic of agency deference — used a similar line before being sworn onto a bench with heavy influence over environmental issues.

Though Rao did acknowledge research on the human contributions to climate change, when pressed on the subject, she replied, "Well, I am not a scientist" (Greenwire, Feb. 5 2019).

Experts worry that Barrett, a judge on the 7th U.S. Circuit Court of Appeals, would err toward rolling back agency powers if she joins the nation’s highest court. Those powers include the ones that regulate greenhouse gas emissions.

Her confirmation could cement a conservative majority that may be hostile toward giving agencies like EPA more scope over aggressive climate actions. This doesn’t bode well for challenges to Trump’s environmental rollbacks or sweeping climate regulations from a potential Biden administration (Climatewire, Sept. 28).