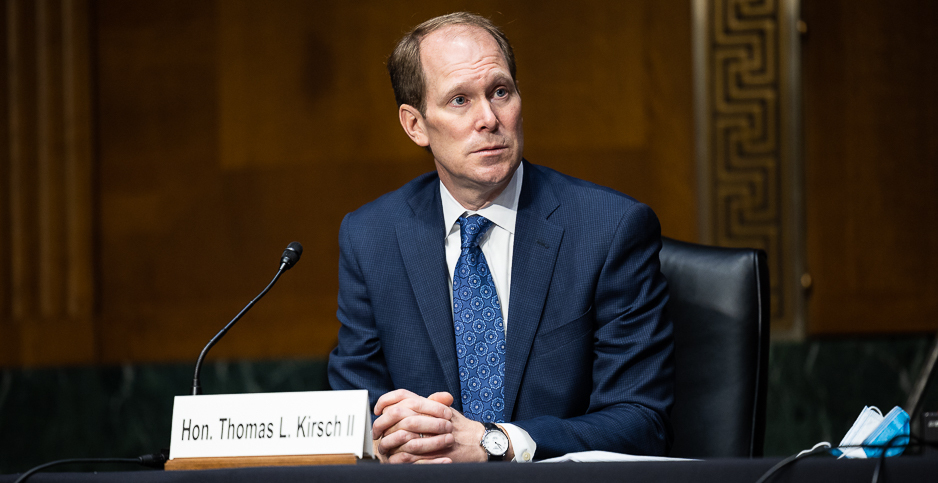 President Trump’s choice to fill a seat vacated by Supreme Court Justice Amy Coney Barrett had seemed ready to sail through his confirmation hearing until a lawmaker questioned how the nominee would interpret federal statutes — an issue that could affect rulings in environmental cases.

Thomas Kirsch, who has been chosen to sit on the 7th U.S. Circuit Court of Appeals, came under fire for his statements to Senate Judiciary Chairman Lindsey Graham (R-S.C.) that, if confirmed, he would approach disputes involving federal statutes by considering the ordinary meaning of the text at the time the law was crafted.

Barrett has espoused a similar approach, raising concerns among Democrats about how she would rule in disputes over environmental protections, civil rights and other issues.

"You seem capable, qualified, calm and without ulterior motive in going on to the circuit court," Sen. Sheldon Whitehouse said to Kirsch during a hearing yesterday. "But in your answer to Sen. Graham’s questions, you repeatedly emphasized the role of, even in a statutory review, what the intention was at the time" the law was written.

The Rhode Island Democrat asked Kirsch to explain how his approach to statutory and constitutional interpretation squares with the Supreme Court’s 1954 ruling in Brown v. Board of Education that struck down state laws allowing segregation in schools. Kirsch said he believed the court reached the correct decision in the case.

"How do you reconcile your testimony that Brown was correctly decided with your view that the Equal Protection Clause should be read in light of what was meant in 1868?" Whitehouse asked.

Kirsch answered that he would apply the law, look at the relevant statutes and apply Supreme Court precedent. Whitehouse grew visibly frustrated.

"We’re clearly getting no place here," Whitehouse said. He added later, "I was actually inclined to support you."

Graham jumped in to explain that the Supreme Court was able to reach its decision in Brown because of the record the litigants built in the case to demonstrate that the "separate but equal" doctrine enshrined in the 14th Amendment of the Constitution did not, in fact, ensure equal protection. Brown therefore aligns with the philosophy of originalism, which says that the Constitution should be read according to its meaning at the time it was written, he said.

"I’ve been waiting all year for someone to ask this question," Graham said.

Whitehouse appeared satisfied. "You are an outstanding lawyer," he told Graham, "and you have done an excellent job of rehabilitating the witness."

Statutory interpretation became a hot topic this summer after Justice Neil Gorsuch, whom Trump appointed to the Supreme Court, decided in Bostock v. Clayton County that the Civil Rights Act protects workers from being fired from their jobs on the basis of their sexual orientation or gender identity.

The ruling stoked the hopes of environmental lawyers that Gorsuch and other conservative jurists might similarly use textualism, which says that federal statutes should be interpreted according to the ordinary meaning of their text, to determine that the Clean Air Act could be read to favor stronger regulation of greenhouse gas emissions (Climatewire, June 18).

Sen. Josh Hawley (R-Mo.) dug in on whether Kirsch embraced the "growing school of thought" that a law’s ordinary meaning could be understood to mean one thing, until a judge or a justice interprets the law another way 50 years after it was written.

Kirsch said he would look at what the words of a statute meant at the time it was crafted.

"I’m heartened to hear you say that," Hawley said.

The committee breezed through the nominations of several lower court appointees, including Katherine Crytzer to the U.S. District Court for the Eastern District of Tennessee.

Crytzer was tapped — but never confirmed — to serve as the inspector general for the Tennessee Valley Authority (E&E Daily, Sept. 17).

This week the Senate approved:

Majority Leader Mitch McConnell (R-Ky.) has set up more judicial nominees for when the chamber returns from Thanksgiving break.