Barrett to Senate: ‘You would not be getting Justice Scalia’ 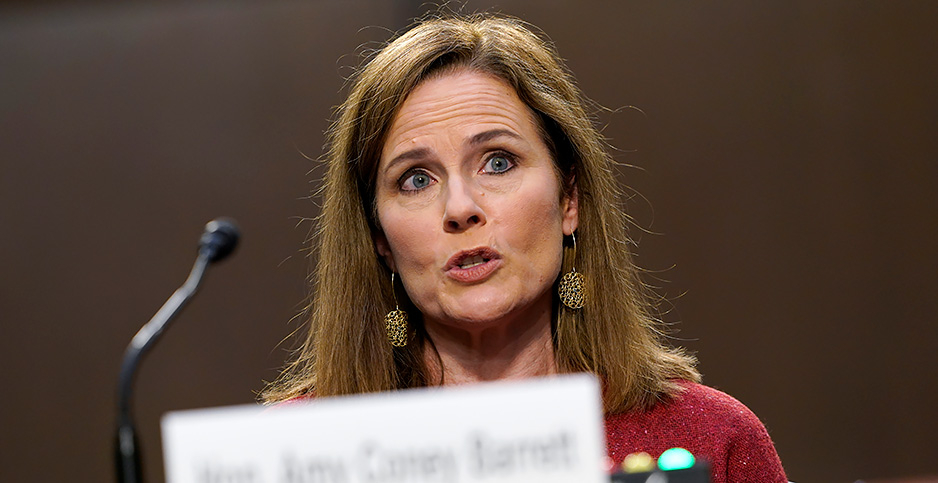 Members of the Senate Judiciary Committee were curious about how Barrett would rule if she were confirmed to the nation’s highest bench, which frequently hears important environmental cases.

Since Barrett, 48, has served only three years on a federal court, her relationship with the late conservative justice has been a focus for legal experts trying to determine how she might come down on cases involving climate change and other key issues.

Barrett’s answer came in response to Chairman Lindsey Graham’s (R-S.C.) request for her to respond to speculation that she would be a "female Scalia" if confirmed to the high court.

Graham, who applauded Barrett as "one of the greatest picks President Trump could make," asked the 7th U.S. Circuit Court of Appeals judge to expound on her use of originalism and textualism to reach decisions in legal disputes.

Barrett said today that she is required to reach rulings that comport with her judicial analysis "even when the result cuts across policy preferences."

The University of Notre Dame law professor has not made clear her personal views on environmental issues, but her limited record has raised some red flags for green groups.

Barrett voted against an expansive reading of the Clean Water Act in one 2018 7th Circuit case (Greenwire, Sept. 28).

Her ruling in a separate 7th Circuit case has environmental lawyers concerned that she would take an unfavorable view of green groups’ standing to file lawsuits in court.

"It’s not the law of Amy," Barrett said during her hearing today. "It’s the law of the American people."

Judiciary Committee Democrats today had numerous questions for Barrett about how she would approach decisions to overhaul prior case law.

The inquiries have implications for Barrett’s views on Supreme Court precedent on climate and the environment.

California Sen. Dianne Feinstein, the top Democrat on the Judiciary Committee, asked Barrett whether she agreed with Scalia that Roe v. Wade, the 1973 case that protects abortion rights, should be overturned.

"This is a fundamental question," Feinstein said.

Barrett declined to offer a position but promised to "obey all the rules of stare decisis," which requires courts to follow prior decisions when deciding new cases on similar issues. She evoked Justice Elena Kagan and remarks she made during her own confirmation hearings.

"I’m not giving a thumbs-up or thumbs-down to any precedent," Barrett said.

Barrett’s writings on precedent, such as in a 2013 article titled "Precedent and Jurisprudential Disagreement," have raised concerns among environmentalists that Barrett would be open to overturning key environmental cases.

Among the potential targets are EPA’s ability to regulate greenhouse gas emissions, as established in the 2007 case Massachusetts v. EPA, and environmentalists’ power to file lawsuits, which was laid out in the 2000 case Friends of the Earth v. Laidlaw Environmental Services.

The late Justice Ruth Bader Ginsburg, whom Barrett would replace if she is confirmed to the Supreme Court, wrote the majority opinion in Friends of the Earth. The case came before the court while Barrett was clerking for Scalia, who wrote the dissent in the case, in 1999.

Barrett, who would be the Supreme Court’s sixth conservative justice, noted today that she would not have sole power to sway the bench. The Supreme Court has to wait for cases to come before it, she said, and four justices must vote to hear a dispute.

"Judges can’t just wake up one day and say, ‘I have an agenda,’" Barrett said. She later added: "You have to wait for cases and controversies."

Questions of environmentalists’ standing could soon be elevated to the Supreme Court if Juliana v. United States, the landmark kids’ climate case that asks the U.S. government to phase out fossil fuels, arrives at the bench (Climatewire, March 4).

Litigants in the case are awaiting an answer from the 9th U.S. Circuit Court of Appeals on whether it will reexamine the challengers’ loss.

Barrett’s hearing is expected to stretch well into this evening. She’ll face more questions from lawmakers this afternoon and tomorrow. The committee is scheduled to bring in outside experts Thursday.