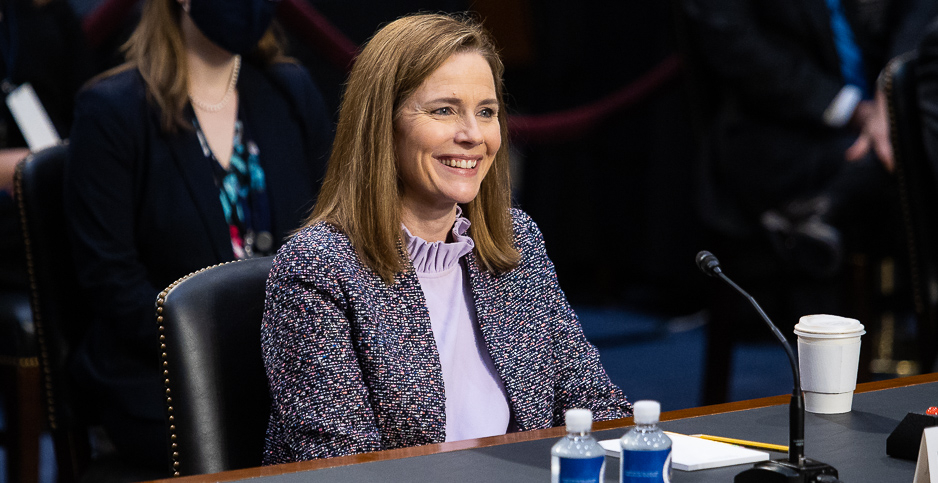 Supreme Court Justice Amy Coney Barrett issued her first decision today, siding with the government in a battle over records related to an EPA rule. Barrett is pictured during her confirmation hearing in October 2020. Francis Chung/E&E News

The federal government does not need to disclose draft documents that informed its conclusions about the harm an EPA rule would pose to vulnerable plants and animals, the Supreme Court ruled today.

In a 7-2 decision, and the first majority ruling led by Justice Amy Coney Barrett, the court said that the Freedom of Information Act does not require the release of a draft document that would offer the public more detail about what prompted federal regulators to change their conclusions in an Endangered Species Act consultation done in support of an EPA rule.

"The deliberative process privilege protects the draft biological opinions from disclosure because they are both predecisional and deliberative," Barrett wrote in the opinion issued this morning.

During arguments last November in Fish and Wildlife Service v. Sierra Club, the first in which Barrett participated, the Supreme Court’s most junior justice asked the parties in the case to delineate which factors are relevant to determine whether a record is exempt from disclosure under the Freedom of Information Act (Greenwire, Nov. 2, 2020).

At issue in the case was a 2013 draft biological opinion and other records underpinning a 2014 EPA rule governing power plant cooling water intake structures. The draft biological opinion from FWS determined that a proposed version of the EPA rule would harm plants and animals covered under the Endangered Species Act. EPA later finalized a revised version of the regulation.

The Sierra Club said the public has the right to access the draft biological opinion so they can know what changed. The environmental group received the backing of the American Farm Bureau Federation and American Forest Resource Council — groups that typically face off against the Sierra Club in court — in a friend of the court brief.

Government lawyers argued that the draft biological opinion was covered under FOIA Exemption 5, which keeps deliberative and predecisional documents under lock and key.

"I believe that, in the context before us, the Services’ Draft Biological Opinions reflect ‘final’ decisions regarding the ‘jeopardy’ the EPA’s then-proposed actions would have caused. Hence, they would normally fall outside, not within, Exemption 5," Breyer wrote.

He said he would recommend sending the case back to the 9th U.S. Circuit Court of Appeals to determine whether the draft biological opinion and other records at issue in the case were "complete but for a final signature."

If they weren’t, Breyer said, he agreed with the majority that the government must disclose parts of the documents containing information subject to FOIA exemption.

Sierra Club senior attorney Elena Saxonhouse said she was encouraged to see the justices affirm that the context of a draft document matters when deciding whether it can be withheld from disclosure.

"The Court agreed with Sierra Club on the key principle of the case, which is that agencies cannot simply declare documents ‘drafts’ in order to avoid public release. As the Trump administration showed, such loopholes are prone to abuse," Saxonhouse said in a statement.

"We do think the Court misread the facts in this case, as the opinions here were meant to — and did — determine subsequent agency actions," she said. "But the Court did not hold that the documents may be wholly withheld; the agencies will need to release any factual, non-deliberative information within them."

The Interior Department, which houses FWS, declined to offer a statement on the ruling.

One Supreme Court scholar said the outcome of the case came as no surprise.

"The decision is likely to make it harder for the public to see biological opinions in the future," said Bob Percival, director of the Environmental Law Program at the University of Maryland’s law school, "though Justice Breyer tries hard to do damage control in his dissent."

Today’s ruling gave Supreme Court experts their first glimpse at how Barrett’s addition to the bench could affect the outcome of environmental cases.

Barrett is a conservative jurist, but ideology doesn’t always predict outcome in legal cases, especially ones involving wonky doctrines like eminent domain, which has led some libertarian-leaning groups to oppose private land takings for pipelines and other energy projects.

While Chief Justice John Roberts had built a reputation as a swing voter when the court had a 5-4 conservative majority, Barrett’s addition has diluted his power to sway the outcome of cases that split the court along ideological lines.

Many scholars say it will now be important to look at voting pairs, such as Roberts and Justice Brett Kavanaugh, or perhaps Barrett and Kagan.

"I find it interesting that Justice Kagan joined Justice Barrett’s majority opinion," said Percival. "Both have reputations for being open-minded, so we might see them voting together more in future cases."

Barrett will have an opportunity to weigh in on a handful of other environmental matters before the court concludes its term (Greenwire, Feb. 18).

She has heard arguments in several pending cases, including BP PLC v. Mayor and City Council of Baltimore, a procedural battle with the potential to upend lawsuits from state and local governments seeking to hold the oil and gas industry financially accountable for climate impacts.