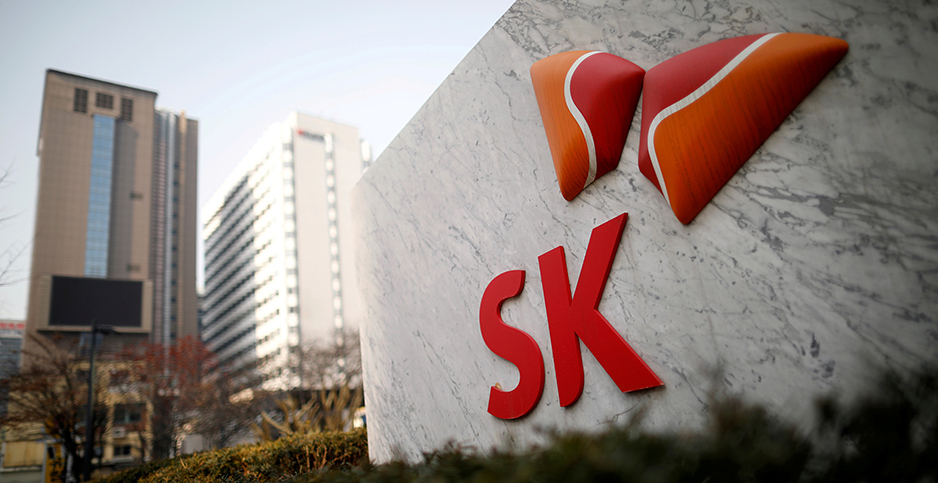 The logo of battery maker SK Innovation is seen in front of its headquarters in Seoul, South Korea, in this February 2017 photo. Kim Hong-Ji/Reuters/File Photo/Newscom

Two rival battery manufacturers have agreed to settle a trade dispute that threatened to disrupt the Biden administration’s electric vehicle goals, following an intense pressure campaign from the White House and a phalanx of state and federal lawmakers.

The clash between LG Chem and SK Innovation, both based in South Korea, concerned whether SKI had stolen trade secrets about LG Chem’s battery technologies and obstructed U.S. International Trade Commission investigators. At stake was the future of an SKI factory in Georgia that had emerged as a political flashpoint over jobs and President Biden’s clean energy agenda.

The White House declared victory after the two companies agreed to a deal over the weekend that would allow SKI to move forward with its $2.6 billion battery manufacturing plant in Commerce, Ga.

"This settlement agreement is a win for American workers and the American auto industry," Biden said in a statement yesterday, calling it a "positive step" toward creating a U.S. battery supply chain for EVs.

The deal appeared to alleviate concerns about how fallout from a recent ITC ruling might deal a serious setback to U.S. electric vehicle production and the Biden administration’s climate goals. The ITC found in February that SKI had obstructed its investigation into the trade secrets dispute, and the federal agency slapped the company with a 10-year ban on importing battery parts for assembly at its Georgia factory. SKI appealed to the Biden administration to veto the ITC ruling, saying the ban would cause the company to abandon its work in the Peach State and cost thousands of local manufacturing jobs.

On Saturday, SKI and LG Chem announced they had buried the hatchet, allowing SKI to sidestep the ITC’s ban without requiring a rare veto from the president. SKI agreed to pay $1.8 billion to LG Chem in addition to other royalties. In exchange, LG Chem said it would withdraw its claims before the ITC and other courts in the U.S. and South Korea over the alleged theft of battery secrets, and refrain from filing new lawsuits over the matter for a decade. Both companies declined comment on whether the settlement included any admission of wrongdoing from SKI.

"We have decided to settle and to compete in an amicable way, all for the future of the U.S. and South Korean electric vehicle battery industries," the chief executives of both companies said in a joint statement issued Saturday. "In particular, we will work together to strengthen an EV battery domestic supply chain and support the U.S. Biden Administration’s effort to advance green energy policies and environmental responsibility."

Biden in his statement also thanked U.S. Trade Representative Katherine Tai, who acted as the administration’s lead in brokering a deal.

In her own statement, Tai said the settlement would respect LG Chem’s intellectual property rights while putting the U.S. in "a stronger position to drive innovation and growth of clean energy technology."

By 2025, SKI’s U.S. production is estimated to account for 17% of the domestic supply of batteries available for electric vehicles, according to a recent analysis by BloombergNEF. LG Chem and a partnership between Tesla Inc. and Japan’s Panasonic Corp. would supply most of the rest.

SKI had argued that banning its imports would have resulted in a "serious adverse impact" to Biden’s goals such as electrifying the entire federal agency vehicle fleet and reaching net-zero CO2 emissions by 2050. The company pointed out that Tesla’s gigafactories would not supply batteries for other EV carmakers, leaving LG Chem with a near-monopoly were SKI to withdraw from the U.S.

The ITC’s 10-year ban had included grace periods for SKI to import battery parts to meet agreements with Ford Motor Co. and Volkswagen of America, which are planning to build new all-electric models using SKI’s batteries. The two automakers had urged SKI and LG Chem to settle and avoid turning them into what VW referred to as "unintended victims" of the ITC’s punishment.

The carmakers each said in similar statements that they were "pleased" the battery companies had resolved their differences and that they would be able to concentrate on U.S. EV production.

"With the intellectual property issues between the two companies now settled, our complete focus now shifts to where it should be," said Volkswagen’s President Scott Keogh.

The battery makers’ conflict had recently drawn in several high-profile former U.S. officials, who were hired by the companies to lobby or give strategic advice (Energywire, March 26). South Korea’s government also pressed for a settlement: In late January, Prime Minister Chung Sye-kyun called the matter "embarrassing," The Korea Times reported.

But the dispute reached a fever pitch last week as a Sunday evening deadline loomed for the Biden administration to veto the ITC’s ruling.

Biden dispatched Tai to meet with SKI and LG Chem and press them into making a deal. Meanwhile, SKI pointed to a preliminary finding, issued by a separate ITC judge, that it had not violated LG Chem’s battery patents. That March 31 decision might have offered the Biden administration cover for a veto: If upheld, the finding would have effectively cleared SKI of stealing LG Chem’s intellectual property.

Some analysts had warned of trouble from the ITC’s import ban. Clean energy market researchers at BloombergNEF wrote in February that SKI’s disappearance from the U.S. battery scene would "complicate" but not "derail the country’s EV market" (Energywire, Feb. 18).

A Biden veto of the ITC ruling would have been exceedingly rare: That power has been exercised just once in the past few decades, by former President Obama in a dispute between Samsung Group and Apple Inc.’s consumer electronics divisions.

A White House reversal would have likely raised questions about intellectual property protections for energy companies. One supporter of LG Chem’s case, Ohio Gov. Mike DeWine (R), wrote in a May 2020 letter to the ITC that the company’s billion-dollar battery investments in the Midwest could be "threatened or chilled" unless SKI were penalized. DeWine’s office said yesterday that the settlement would protect those investments and was "good news for Ohio."

But Georgia officials were also busy ratcheting up pressure in favor of SKI.

Last week, Georgia Gov. Brian Kemp, a Republican, issued a statement recalling Biden’s support for Major League Baseball’s decision to move the All-Star Game — one motivated by the passage of a state voting-rights law criticized as racist — and said if SKI abandoned Georgia too, the president would be responsible for the resulting job losses.

"There is no doubt that President Biden’s disinformation campaign and public support for MLB moving the All-Star Game from Georgia hit the paychecks and bottom lines of hardworking Georgians and small businesses in the metro-Atlanta area," Kemp said. "However, the president now has yet another decision before him that will make or break a $2.6 billion investment in our state. The jobs of at least 2,600 Georgians depend on President Biden’s upcoming decision on the ITC ruling, and I sincerely hope he will use his authority to do the right thing."

The state’s Democratic senators, Jon Ossoff and Raphael Warnock, were also involved in the full-court press of SKI and LG Chem, scheduling calls and meetings with company executives, fellow lawmakers, state and local officials, and Biden.

Those actions came in support of SKI battery plans that represent one of the biggest economic deals in Georgia in more than a decade. The state and Jackson County, where SKI’s facility is located, offered SKI about $300 million in combined grants, tax breaks and free land, according to The Atlanta Journal-Constitution.

"This successful outcome will lead to billions more in investment in Georgia," SKI CEO and President Jun Kim said in a statement provided by Ossoff’s office. "The state is now positioned to be the nation’s leader in electric vehicle battery production."

Upon taking office, Trump immediately yanked the U.S. out of the Trans-Pacific Partnership, a market-opening agreement among a dozen Asian Rim countries backed by the Obama administration. Trump denounced the agreement, the overture to his go-it-alone trade policy armed with restrictive tariffs to pressure trading partners for concessions.

Biden hasn’t moved to rejoin the TPP but has given top priority to restoring economic and strategic ties within the region to counter China’s growing economic power.