Battle erupts over the definition of ‘infrastructure’ 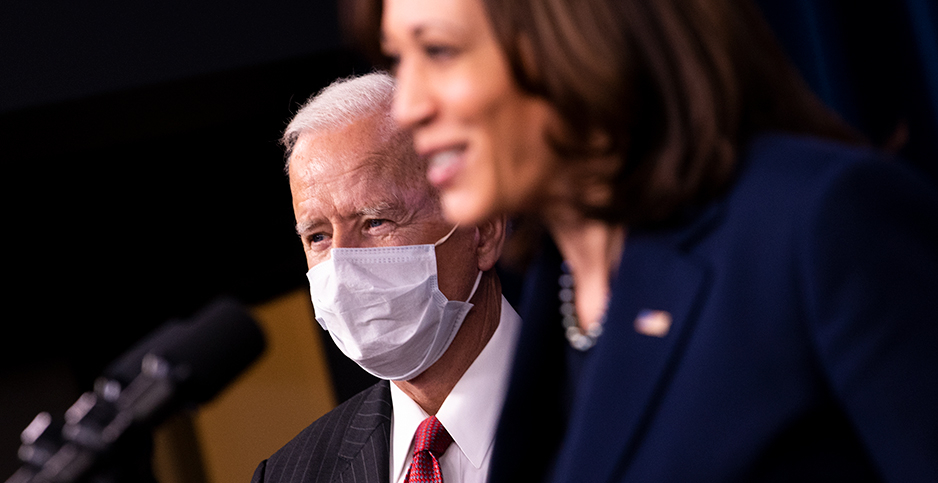 President Biden and Vice President Kamala Harris. Much of the Biden administration's climate legacy is riding on a massive infrastructure bill now in the works. Lisa Ferdinando/U.S. Secretary of Defense/Flickr

Republicans are trying to draw the Biden administration into a fight over the meaning of "infrastructure." And Democrats seem happy to oblige.

With polls showing broad bipartisan support for infrastructure spending, Republicans are trying to recast President Biden’s $2.3 trillion package as something else. Along with corporate tax increases, they’re attacking the plan for lumping social and climate programs together with traditional public works.

"The roads, the bridges, the airports, the ports — all the money they propose spending on that is exceeded by the amount of money that they are willing to spend to set up electric [vehicle] charging stations all over America," Sen. Roy Blunt (R-Mo.) said Monday on Fox Business.

It’s more than semantics. These early days are the best chance for each side to define Biden’s plan in the public imagination. And while the president has only fleetingly cast his package as a climate plan, his Cabinet has made it a bigger emphasis in their sales pitches.

Republicans hope to avoid a repeat of Biden’s pandemic relief bill, the American Rescue Plan, which passed with broad public support despite no GOP lawmakers voting for it. Depending on who’s counting, they’ve argued that somewhere between 5% and 30% of Biden’s plan would address conventional infrastructure. (A Washington Post fact check found the number is closer to 15% to 40%.)

"You look at this bill, the $2 trillion in the bill that, only about 5 to 7% of it is actual roads and bridges and ports and things that you and I would say is real infrastructure and that we tried to get passed under the last administration with President Trump," Russ Vought, former director of the Office of Management and Budget during the Trump administration, said last week on Fox News Radio.

Instead, Biden’s pandemic and economic approval numbers have ticked upward since the American Rescue Plan was passed, according to a recent Associate Press-NORC poll.

Democrats are confident that they’ll benefit from the same dynamic with infrastructure. Biden’s team has spent the past week defending the president’s climate focus as necessary for both curbing future risks as well as making U.S. businesses more internationally competitive.

"If you can’t see what, beyond roads and bridges, is infrastructure — if you don’t see broadband as infrastructure, I’m just not sure what is infrastructure. I think that’s just an attack that doesn’t make sense in the 21st century," Energy Secretary Jennifer Granholm said yesterday at a League of Conservation Voters event.

The White House has pointed to Republicans’ past support for the kinds of projects they’re now attacking.

"So I would suggest that many of their constituents would be surprised to hear that those are not infrastructure projects," she said. "And I’m sure with a little Googling, you can all figure out who those all are."

So far, Biden’s approach seems to be working. But the polling does carry red flags for Democrats.

"Whether or not you want to call it ‘infrastructure,’ Biden’s plan is very popular," Chris Kahn, polling editor at Thomson Reuters, wrote on Twitter.

Reuters polling last week found massive support for some portions of Biden’s plan, like extending high-speed internet to all Americans (71%), as well as majority support for climate policies like renewable energy tax credits (66%) and ending subsidies for fossil fuels (56%).

But public support dipped, the poll found, when those policies were reframed as a part of a Democratic proposal, rather than abstract goals.

That’s one reason the Biden administration has been eager to emphasize the bipartisan potential of the package.

"Rail, ports, airports, bridges, roads, broadband, transmission, water — all of that is classic infrastructure, whether they want to admit it or not," Granholm said.

"And those who have been railing on [this proposal] have introduced bills or voted to support all of that in the past," she added. "So I’m hopeful that we can get beyond this ‘no, no, no’ and get to the points of ‘yes, yes, yes.’"

Biden’s Cabinet has argued that each component of his infrastructure plan is important — but they’ve also started arguing that its value is greater than the sum of its parts.

"I would say that infrastructure is the foundation that makes it possible for Americans to thrive and live lives of their choosing. And I know there’s a lot of quibbling over the definition of infrastructure. I’ve been puzzled to hear a lot of Republicans express a view that things like water and wastewater pipes don’t count as infrastructure," Transportation Secretary Pete Buttigieg said on CNN.

"All of these things are connected," he added. "I know there’s a tendency in Washington to slice them into one piece at a time, but that’s a philosophical or academic exercise. At the end of the day, this plan is about a stronger economy that helps Americans live better. And I think that’s one of the reasons why it commends remarkable support among the American people."