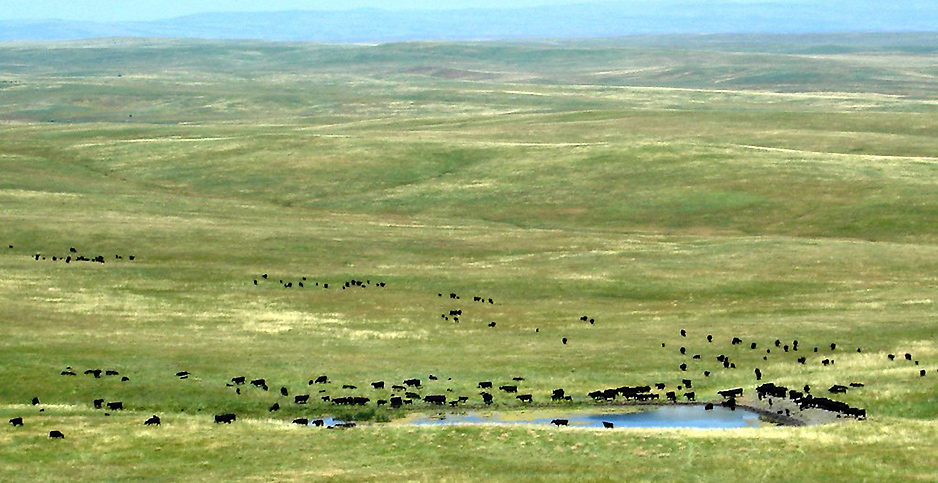 Cattle graze near a stock pond in the Oglala National Grassland in Nebraska. U.S. Department of Agriculture/Flickr

Agriculture Secretary Sonny Perdue’s directive last week promoting grazing on Forest Service land could rekindle a long-running debate about why the federal government is in the livestock-grazing business.

Ranchers cheered Perdue’s announcement, in which he told the Forest Service to make grazing permits easier to obtain and to give grazing more prominence in the agency’s management plans for national grasslands.

Environmentalists said the move will put sensitive public lands, including waterways, at risk of contamination from overuse by farm animals, while continuing a money-losing operation for the government.

"The Forest Service will recognize grazing on national grasslands as essential for their management and streamline range improvements and the permit renewal process to reduce burdens and improve customer service for America’s grazers," the Agriculture Department said in announcing Perdue’s June 12 memorandum to Forest Service Chief Vicki Christiansen.

While the department didn’t elaborate on how it will speed the process, congressional and other supporters said simpler reviews under the National Environmental Policy Act — an ongoing process at the agency that could generate revised regulations in the next few months — are a key part of the effort. Perdue also said the forest management plan should recognize grazing as "essential."

Environmental groups, long critical of grazing on federal land, said the directive foreshadows the NEPA changes and perpetuates a policy they consider misguided.

"I don’t think it can be done sustainably," said Jocelyn Leroux, Washington and Montana director for the Western Watersheds Project, an Idaho-based nonprofit organization that has sued the Forest Service over grazing policies in Utah. "Our sense is that national forests should be managed for other uses."

Farm groups and many Western lawmakers say grazing is a useful land management tool that also benefits livestock farmers who move their animals onto the land as part of a feeding rotation. Properly practiced, they say, grazing can reduce wildfire risks while mimicking the symbiotic relationship between bison and grasslands that was once vital to the prairie.

"Livestock grazing is an important tool in grassland and prairie ecosystems," said Kaitlynn Glover, executive director of the Public Lands Council and for natural resources policy at the National Cattlemen’s Beef Association, which advocates for Western ranchers.

The environmental group Defenders of Wildlife told E&E News, however, that grazing more generally degrades the landscape, especially in areas near streams, and hurts habitats for endangered species.

Grazing is a decades-old practice on national tracts, as well as on lands managed by the Bureau of Land Management.

The Forest Service had about 93 million acres available for grazing in 2017, of which 74 million were used, according to the Congressional Research Service. The service oversees a total of 193 million acres of forest and grassland.

Grazing on federal land is a source of frequent clashes in policies and practices, illustrated in the extreme by the armed dispute over Cliven Bundy’s cattle near Bunkerville, Nev., beginning in 2014. Bundy disputed whether the federal government has the right to own land at all, let alone charge people to let cattle graze on it.

A more enduring debate centers on the fees the government charges livestock producers for grazing permits, which typically last a decade. Expiring leases automatically renew, according to federal law.

The Forest Service, as well as BLM, set identical fees each year. For the most recent year, the government charged $1.35 per animal unit month, or AUM, accounting for the amount a cow would eat in a month, for instance.

The formula, set by Congress, considers beef cattle prices and land value, among other factors. But ranchers pay a fraction of what they would on private or state lands.

Groups representing ranchers counter that the federal lands often aren’t as high quality for grazing as private tracts, and ranchers have to pay for fencing, water or other essentials brought onto the land at their own expense. Efforts by Congress and past administrations, including the Obama administration, to change the formula haven’t gone far.

The implications of Perdue’s directive will play out over months. The Forest Service is in final stages of crafting its own NEPA changes, in addition to broader NEPA regulations being crafted by the administration.

The Forest Service faces hundreds of vacant grazing allotments and a long review logjam that Perdue’s memorandum could help break, Glover said. "The memorandum sets the Forest Service on a good path for a strong and healthy future for these landscapes," she said.