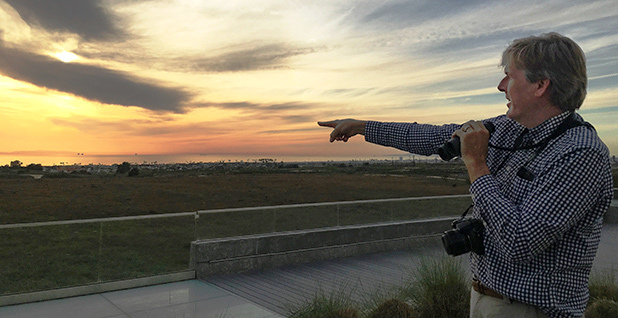 NEWPORT BEACH, Calif. — The real estate market in this coastal city ranks as the country’s most expensive, with homes listing for an average of $2.3 million, according to Coldwell Banker.

That makes a property called Banning Ranch a rare commodity.

The lot’s owners want to transform the site, proposing to build 895 houses while restoring 323 acres as open space. Activist groups have pledged to block that move, saying the land provides valuable wildlife habitat and shouldn’t be carved up.

The property has become a touchstone in a battle pitting development versus preservation in Southern California.

"We’ve kind of paved over everything," said biologist Robb Hamilton, a consultant to Banning Ranch Conservancy, the main group opposing housing on the property. In terms of open land, he said, "this stands out as the last spot around the coast."

The Banning Ranch project is pending before the coastal commission, which oversees land use in 15 counties along 1,100 miles of coast. Some see the Banning Ranch decision as a test likely to show whether the commission is taking a more pro-development bent after ousting its executive director last month.

Banning Ranch, which sits partly in Newport Beach and partly in unincorporated Orange County, at its closest point is 1,000 feet from the ocean. It’s owned jointly by Aera Energy LLC — subsidiary of Exxon Mobil Corp. and Shell Oil Co. — and the investment firm Cherokee Newport Beach LLC. Those companies and the Brooks Street real estate firm are partnering as Newport Banning Ranch LLC (NBR) to develop the site.

Restoring and preserving the land as part of a larger project is the only way to open it for public access, said Michael Mohler, chief operating officer at Brooks Street. The oil field is bordered by an 8-foot fence topped with barbed wire, he said.

"The Newport Banning Ranch Property is at an existential crossroads as a result of more than 70 years of oil operations and rampant growth of invasive plant species," Mohler said in an email. "Should it continue as a derelict brownfield for another 50-100 years — or is there a better, sustainable future for the property?"

The coastal commission last October reviewed a plan from NBR seeking approval at that point to build 1,375 residences, 75,000 square feet of commercial space, 4 acres of retail and 6 acres of resort with a hotel. There also would be more than 300 acres cleaned up and preserved for public access.

Commission staff recommended against approving the plan, saying it wasn’t consistent with the California Coastal Act. That preservation law is considered one of the toughest in the nation. Agency ecologists labeled "a significant portion" of the property as environmentally sensitive habitat area for rare plant and animal life.

"There are very few sites along the southern California coastline with the kind of diverse topography and habitat for wildlife found at this site," the staff report says. "In fact, it appears the subject site is the only area like it within the Santa Ana River watershed" from the sea to mountains 20 miles inland. It added, "the remainder has been heavily urbanized."

Commissioners postponed a vote and advised the developer to produce a smaller plan more likely to comply with the coastal protection law. Then a shakeup at the commission last month threw a new spotlight on the Newport Banning Ranch proposal.

Commissioners voted 7-5 to remove the agency’s executive director, Charles Lester. Defenders described Lester as an independent enforcer of the Coastal Act. Some activists saw the recommendation against developing Banning Ranch and his removal as linked.

"The serious effort to oust him began after the October hearing," said Steve Ray, executive director of Banning Ranch Conservancy. Lester was removed from his job a month before a planned reconsideration of the Banning Ranch project, Ray said, adding, "We don’t think that was just a coincidence."

The commission was due to revisit the proposed Banning Ranch project this month, though it’s now been delayed until May.

Commissioners who voted to remove Lester said the action stemmed solely from unhappiness with his management style.

"Coastal protection was not what was before us" with the Lester vote, Commissioner Wendy Mitchell said at the board’s March meeting. "It was a personnel matter, plain and simple. The narrative spun in the press by many of the activists was about looking for a bad guy. While it’s easier to make it good versus evil, that was not the case."

Banning Ranch developers scaled down their proposal after the October commission meeting. The revised plan calls for the 895 residences, a 75-room boutique hotel, a 20-bed hostel and 45,100 square feet of retail space. There would be 323 acres of open space, parks, trails and road access to public amenities.

The proposed development requires abandoning and cleaning up the oil field, Brooks Street’s Mohler said. Undeveloped areas will be restored, created and protected, he said, "as well as funded in perpetuity at no cost to the public."

The Newport Banning Ranch "reuse proposal will almost immediately put more than 340 acres of the 400-acre site — more than 80 percent of the property — into open space, parks and public access uses," Mohler said. "In addition to residential uses on 15 percent of the property — including needed affordable housing — the proposed development plan also provides for visitor serving uses, including a Coastal Inn, affordable overnight accommodations and a unique outdoor marketplace."

It’s not accurate to describe the large tract as undeveloped, Mohler said. He called it a "brownfield" affected by decades of oil operations and invasive plant species. There are industrial activities and residential areas to the east, he said, a power plant and sewer facility to the west, the Pacific Coast Highway on the south side, and to the north a county park "in desperate need of repair."

Mohler noted that NBR development is offering to put aside land and fund its upkeep in perpetuity without help from the state. That contrasts with the Bolsa Chica wetlands about 6 miles north in Huntington Beach. California over several decades paid to acquire 1,341 acres of that land, located across the street from the beach. Part of the state’s purchase followed a developer’s struggle with the Coastal Commission and a ballot measure.

NBR developers sponsored the creation of the Newport Banning Land Trust, which will care for preserved space at the site. Robyn Vettraino, the trust’s executive director, came to the group after leaving the nonprofit Surfrider Foundation. She said she has no mixed feelings about the proposed development.

"I live in the real world, where I understand there are only two options here," she said. "Either it stays an oil field, or they develop a small portion of it."

As she drove her Prius along dirt roads inside the gated property, Vettraino pointed out places where invasive species like ice plant and pampas grass are overtaking native vegetation. Environmentalists’ arguments that the site should be preserved are flawed, she said, because unless the site is developed, there’s no one to care for the land.

There also are water quality issues, Vettraino said. Water from rains and other runoff flows across the oil field and to the ocean without any treatment. That would change with the project, she said. As well, the housing would be LEED (Leadership in Energy and Environmental Design) certified for energy efficiency.

"It’s an extremely compact, small development," Vettraino said. "To me, it’s a balanced plan and it makes sense."

How much is it worth?

The Banning Ranch lot proposed for development is all that remains of a parcel that once encompassed what’s now the city of Costa Mesa, and parts of the cities of Huntington Beach and Newport Beach. It was a working ranch, Ray said, and also included the Native American tribal lands.

The Army Corps of Engineers put concrete along the Santa Ana River in 1938. That made the property habitable, he said, and development took off.

The remaining 401 acres "constitutes 9 percent of the [original] Banning Ranch," Ray said. "The 9 percent is the compromise. The rest has been developed."

Terry Welsh, president of Banning Ranch Conservancy, conceded that the developers’ argument that building homes on the site is the only way to make it open to the public is "very effective."

"It’s the most effective argument they have," Welsh said. "We agree that abandoning and remediating the property and opening it to the public is good. We don’t want to see almost 900 homes built on it. We’d like to see it preserved as open space. We’d like to save it all."

NBR can’t develop as much as it wants, Welsh argues, because the Coastal Act is very strict. If a proposed development has an adverse environmental impact, it can’t simply be mitigated, as is done with the California Environmental Quality Act, he said.

"If it’s rare or important habitat, you have to build around it," Welsh said.

The Coastal Commission staff report in October said the site had 18.9 acres that could be developed without bumping up against Coastal Act or other environmental restrictions. About 7.4 of those acres would be used for consolidated oil operations. That would leave Banning Ranch’s developers with about 11.5 acres they could build on, Welsh said.

Mohler said Banning Ranch Conservancy’s views on "what the Coastal Commission will identify and/or approve for development are unfounded and misleading." NBR seeks to develop less than 20 percent of the property, he said, "which will provide the capital resources necessary to clean up and preserve the balance of the property."

Banning Ranch Conservancy wants to buy the land. The property’s owners haven’t said they’re selling. Fixing an accurate price for the land could be difficult.

The city of Newport Beach and a private appraiser in 2009 set the price at "well over $200 million," Mohler said. Area real estate prices have climbed notably since that year. Ray said that figure is artificially high, because it’s based on the ability to develop housing on the site.

"The problem is that they can’t [develop] under the law," Ray said. "The Coastal Act is clear that wetlands have to be protected forever. You can’t build on environmentally sensitive habitat, because those have a special role in nature." Open space that developers can’t touch will have to be appraised differently, he said.

Even if that proves true, Banning Ranch Conservancy has limited funds. The group said it’s secured a pledge for $5 million and is cobbling together other donations. Ray said "we’ll do everything we have been doing all along. We continue to gather facts and information."

Developer Mohler said that in the more than 15 years the conservancy has been in existence, "not a single offer or proof of any amount of funds has been put on the table. … The conservancy simply does not have the plan or the financial resources they claim."

There are other values in play, Mohler said in an email, including "the greater good of what this project will achieve for the environment and public access." The conservancy would not be able to secure funds "at almost any significant price," he said, and Newport Banning Ranch "is giving away its open space as a part of the project proposal."