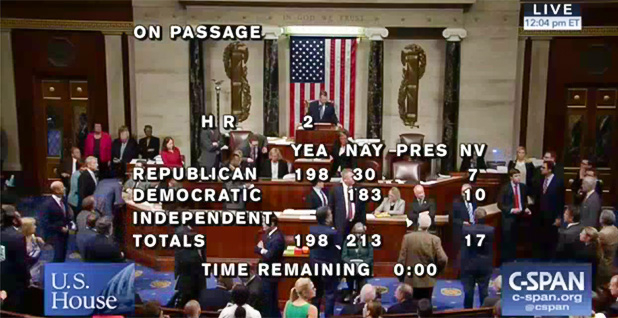 The House today voted down a five-year reauthorization of the farm bill on a 198-213 vote. Thirty Republicans joined Democrats in voting against the measure. C-SPAN

The bill, H.R. 2, crumbled on the House floor after lawmakers passed a range of amendments, including some that appeared to have secured votes of wavering Republicans. The vote was 198-213.

The bill’s undoing came in multiple forms: Democrats were united in opposition because of increased work requirements for the Supplemental Nutrition Assistance Program, and the conservative Freedom Caucus wanted faster consideration of legislation to tighten border enforcement and other immigration restrictions.

Some centrist Republicans voted no, too, scared off by the restrictions on SNAP, House Agriculture ranking Democrat Collin Peterson of Minnesota told reporters.

With the bill’s failure, prospects may darken for enacting a farm bill before the current legislation, enacted in 2014, expires in September. In that case, Congress would almost certainly extend the 2014 legislation into next year, or possibly until the end of this year.

Although House Agriculture Chairman Mike Conaway (R-Texas) had predicted a tight vote, the bill’s downfall countered his predictions last night that he could collect enough Republicans to pass it.

House Majority Whip Steve Scalise (R-La.) told reporters he wasn’t surprised at the opposition within his party but added that the farm bill shouldn’t be partisan.

"We’re not done with this," Scalise said. "It’s a bill that has a lot of important programs for people across the country."

The House could reconsider the measure next week, depending on how Republicans sort out their divisions.

"I warned them not to do this," Peterson said. "I just didn’t see how we could do this on a partisan basis."

He added, "I’m still willing to go back to the table and try to fix this."

The bitter outcome for Conaway contrasted with quick approval of a handful of Republican amendments, including repeal of the "Waters of the U.S." regulations that govern waterways around farms under the Clean Water Act.

The five-year bill’s ultimate fate was already cloudy, given the likelihood that a Senate version to be released in June will differ considerably on major points.

The farm bill authorizes a variety of programs at the Department of Agriculture, including conservation, crop insurance, commodity programs, forestry, research and the Supplemental Nutrition Assistance Program.

The House version would maintain crop insurance, which supporters say is vital as farm incomes have faltered. It would loosen some environmental restrictions on forest-thinning projects, which proponents say will protect against wildfire. And it would eliminate the Conservation Stewardship Program, shifting some of its funding to the Environmental Quality Incentives Program.

It would raise the acreage cap on the Conservation Reserve Program from 24 million acres to 29 million acres, while reducing payment rates.

On the WOTUS repeal, Republicans went with simply discarding the Obama-era regulations, which they say are overly broad, and didn’t consider a rewritten definition of "navigable waters."

An amendment offering a more limited definition was blocked in the Rules Committee earlier this week as leaders tried to avoid losing votes on the bill.

Rep. Jim Banks (R-Ind.), who sponsored the WOTUS repeal, called the regulation "the postcard of government overreach of the Obama administration."

Opposing the provision, Rep. Matt Cartwright (D-Pa.) said the farm bill should be a tool for protecting Americans. "A vote for this amendment is a vote against clean water," he said.

The farm bill has been mired for weeks in partisan politics.

A coalition composed of rural lawmakers who care about farm programs and urban lawmakers who make SNAP a priority usually passes a farm bill with a wide margin; that arrangement unraveled this time, as the Republican leadership pressed tougher work requirements for SNAP.

Peterson refused to support the measure, and he and Conaway stopped talking for five weeks, he told reporters last night.

Peterson said he would return to the negotiating table with Republicans if the party drops its demands for more stringent work requirements for food stamps.

"I am willing to go back to the table to help them fix this. My staff is ready to go back to work — even though they thought they had the weekend off. They always had been ready," said Peterson.