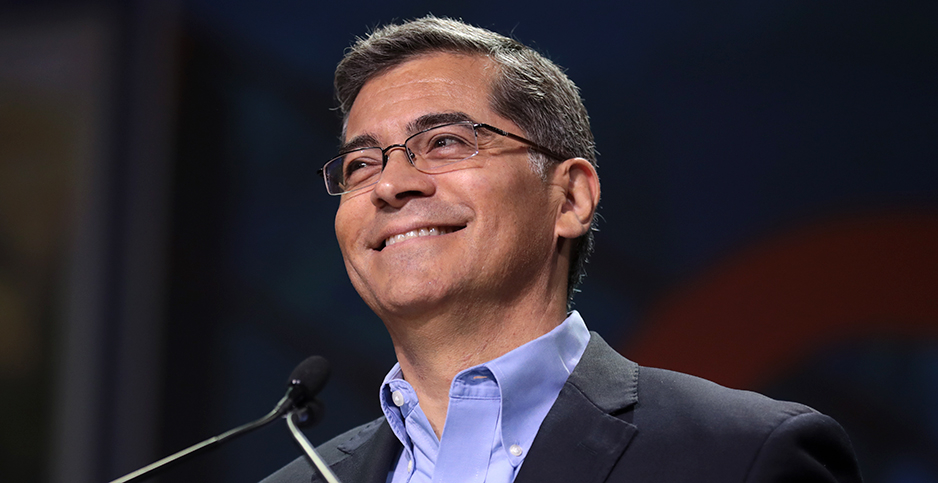 President-elect Joe Biden this week named California Attorney General Xavier Becerra (above) as his choice to lead the Department of Health and Human Services. Gage Skidmore/Flickr

President-elect Joe Biden’s choice of Xavier Becerra to lead the Department of Health and Human Services is in line with Biden’s pledge to confront climate change at every federal agency, supporters said.

And during his 24 years in the House, Becerra was a reliable climate vote, according to the League of Conservation Voters. That includes votes in favor of clean energy and against efforts to cut funding for the National Science Foundation’s Climate Change Education Partnership.

"This strong choice should create a powerful alliance and synergies between [HHS and EPA] to protect Americans’ health & air quality, especially for vulnerable environmental justice communities," John Walke, the clean air director at the Natural Resources Defense Council, wrote in a Twitter post.

RL Miller, a Democratic National Committee delegate who founded Climate Hawks Vote, said that although she doesn’t necessarily have a stance on Biden’s pick for HHS, she does have "very strong opinions" about Becerra’s time as attorney general.

The Los Angeles Times reported in 2016 that then-California Attorney General Kamala Harris had begun an investigation into whether Exxon Mobil Corp. had misled shareholders and the public about the threats of climate change.

But according to Miller, once Harris was elected to the Senate and Becerra was sworn in to replace her in 2017, he said he could not disclose whether his office was investigating the oil giant. That spurred pressure, public letters and petitions from advocacy organizations that called on Becerra to hold the company accountable.

"He could have been honest and said, ‘I am choosing not to act on this.’ And if he had said that the case has critical, legal flaws, I would have respected that," Miller said. "… But for 3 ½ years he played a very cutesy kind of cat-and-mouse game with us.

"Becerra has been very willing to file lawsuits against the Trump administration regarding climate change. But he has not been willing to address corporate contributors to climate change," she added.

Both Biden and Vice President-elect Harris emphasized the importance of environmental justice during the 2020 campaign, and Becerra’s attention to the issue as California attorney general may have given him an edge over some of his competitors for the HHS position.

"The harsh reality is that some communities in California — particularly low-income communities and communities of color — continue to bear the brunt of pollution from industrial development, poor land use decisions, transportation and trade corridors," Becerra said when the environmental justice bureau was created. "Meeting the needs of these communities requires our focused attention."

The bureau’s work focuses on environmental health issues including "ensuring compliance" with the California Environmental Quality Act and challenging actions by the federal government that could impact public health or the environment.

A recent example is the Bureau of Environmental Justice’s opposition to the expansion of San Bernardino International Airport in Southern California. The expansion is meant to provide room for Amazon.com Inc.’s newest air hub, but critics say it would worsen pollution in nearby communities.

More broadly, Becerra’s record on climate change has won him the favor of groups concerned about the ways global warming is hurting human health.

The climate policy group Evergreen Action said yesterday that Biden’s pick of Becerra signals that HHS is prepared to prioritize global warming "like never before."

That’s critical, the organization said in a Medium post, given that every year "climate change causes thousands of deaths, costs billions to America’s healthcare system, and leads to increased illnesses, food insecurity, and spread of infectious diseases."

If confirmed, Becerra’s to-do list is all but certain to start with the coronavirus pandemic — which has killed more than 281,000 people in the U.S. to date.

But Becerra’s track record on climate, combined with the incoming Biden administration’s focus on the issue, suggests that the public health effects of global warming will be a priority too.

Biden’s team already has hinted at what that might mean. His environmental justice platform pledged to establish an HHS Office of Climate Change and Health Equity. The platform also aims to establish a task force led by HHS that would help develop a plan to "decrease risk of climate change to children, the elderly, people with disabilities, and the vulnerable."

Evergreen Action applauded these potential moves — and advocated for others. The group suggested that HHS leverage its Low Income Home Energy Assistance Program to help households pay their energy bills and reduce their energy use.

"In order to realize Biden’s climate mandate, every federal agency must become a climate agency," the group said. "The Department of Health and Human Services under Xavier Becerra will be critical in this effort."