Behind the decision to pull the Interior deputy nominee 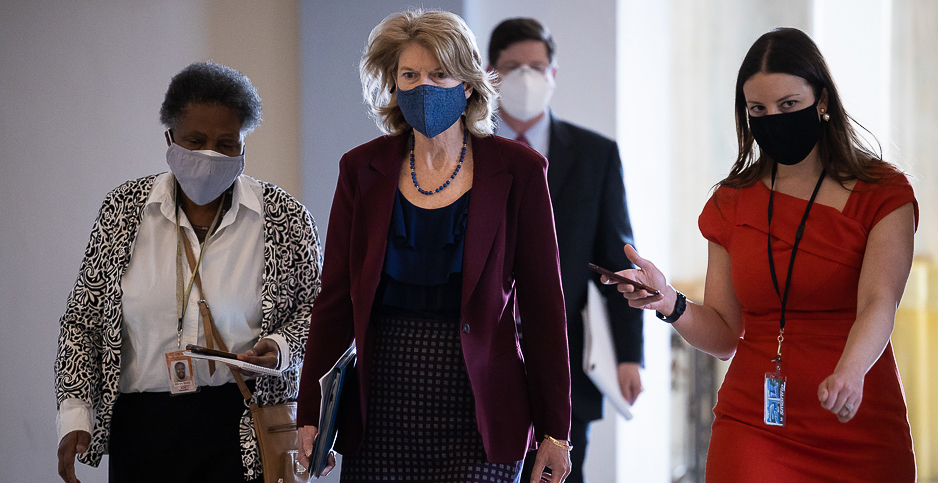 This story was updated at 8 a.m. EDT.

All eyes were on Sen. Lisa Murkowski last month as the White House was aggressively courting the moderate Alaska Republican to vote for doomed Office of Management and Budget director nominee Neera Tanden.

There was nothing the Biden administration could give Murkowski in exchange for promising to support Tanden — but, as it turns out, it might have already made a deal on someone else.

Sources familiar with the arrangement told E&E News yesterday that Murkowski facilitated an agreement from the administration to renege on nominating Elizabeth Klein to serve as deputy Interior secretary as it moved forward with plans to confirm Deb Haaland as the first Native American to lead the federal agency.

The administration made the concession some time ago, before Haaland’s confirmation proceedings on Capitol Hill were well underway but after Haaland and Klein had been announced as President Biden’s picks to fill the top two slots in Interior leadership.

Plans to withdraw Klein’s nomination were only shared with Interior staff last week, sources familiar with the situation said. An Interior spokesperson had no comment yesterday on the matter.

A veteran of the Clinton and Obama Interior Departments, Klein was most recently the deputy director of the New York University School of Law’s State Energy & Environmental Impact Center.

In that capacity, Klein helped support state attorneys general in filing dozens of lawsuits challenging Trump environmental rollbacks, including the former administration’s efforts to open up the public lands within the coastal plain of the Arctic National Wildlife Refuge to oil and gas development.

Murkowski confirmed to E&E News yesterday that she had told the White House about her opposition to Klein, but she was not the only lawmaker to have concerns (Greenwire, March 23).

Several Republicans on the Senate Energy and Natural Resources Committee told E&E News they were opposed to Klein and were glad she had been taken out of contention for the No. 2 job at Interior.

There also might have been opposition to Klein from within the Democratic ranks, with rumblings that Senate Energy and Natural Resources Chairman Joe Manchin (D-W.Va.) was among them.

"I would just generally describe it as ‘bipartisan concerns,’" said Sen. Dan Sullivan (R-Alaska), who is not on the committee but follows Interior personnel decisions closely.

Manchin, a moderate on energy policy who is sensitive about perceived attacks on his coal-producing state, declined to comment on Klein when approached on Capitol Hill yesterday.

There was also, as of last night, an anonymously run website devoted to bashing Klein, laying out the case that she should not be allowed to help manage the department given the time she spent as an attorney with the Michael Bloomberg-funded NYU Law center, supporting state attorneys generals’ suits against the agency.

But Murkowski was the conduit between these opponents and the White House, sources said.

And news of the agreement to sideline Klein comes when Murkowski has emerged as one of the most consequential GOP allies of the new administration, which needs to cultivate and maintain good relationships with as many Republicans as possible, both to confirm its nominees and push its agenda.

Murkowski told E&E News yesterday she was "bucking" for the Biden administration to nominate Tommy Beaudreau — an Alaska-raised energy lawyer who served as the first director of the Bureau of Ocean Energy Management — in Klein’s place.

Her office denied, however, that she extracted a quid pro quo on Beaudreau’s behalf or that her support of Haaland was contingent on the administration withdrawing Klein.

The White House might have been the more willing and eager partner in conversations with Murkowski about how to make her happy, making an offer to drop Klein as a necessary sacrifice to generate goodwill with the senator going forward.

Murkowski had difficulty voting for Haaland, whose progressive record included past statements opposing all oil and gas drilling on public lands and the construction of new pipelines — positions that are anathema to many of Alaska’s economic interests.

"I struggled with this vote," Murkowski said at the time, "how to reconcile a historic nomination with my concerns about an individual’s — and an administration’s — conception of what Alaska’s future should be."

When Murkowski announced she would vote "yes," it was a huge win for Haaland’s allies who desperately wanted the support of the Republican considered among her colleagues as an influential voice on all things Interior.

She is the former chairwoman of the Energy and Natural Resources Committee and the top Republican on the Senate Interior and Environment Appropriations Subcommittee.

But Murkowski also made clear at several points toward the end of Haaland’s confirmation proceedings that, if she voted for Haaland, she’d expect the new secretary to assemble a team that would represent a diversity of viewpoints on energy extraction.

"I … fully anticipate that she will have a strong management team in place with people who understand the value of resource development from public lands," Murkowski told her Energy and Natural Resources colleagues. "She needs this — we need this — within the Department of Interior."

Though Klein’s supporters describe her policies as mainstream, or even moderate, compared with Haaland, the lawsuits Klein assisted with were far from friendly to oil and gas interests, which have been targeted by the Biden administration.

In Biden’s first week in office, he placed an indefinite moratorium on the sale of new leases for oil and gas drilling on federal lands and a 60-day reroute of fossil fuel decisions through top brass.

Last week, Interior quietly announced it will continue funneling many fossil fuel decisions traditionally made at the local level through Washington (Greenwire, March 23).

In other words, Klein was not universally seen as poised to be the moderating force within a Haaland-run Interior Department that Murkowski and others desired.

It’s not clear whether Klein could have been confirmed had her nomination proceeded apace, but some sources suspected her confirmation process would have become a proxy battle for the future of fossil fuel development — not unlike Haaland’s was, but without the added incentive of Republicans feeling pressure to help make history by supporting her (E&E Daily, March 5).

An administration spokesperson said in a statement to E&E News yesterday that Klein’s nomination was never formally submitted to the Senate, suggesting that there was no withdrawal to make, despite the fact that Biden’s transition team put out a glowing statement on her forthcoming nomination days before the inauguration.

The spokesperson would not comment on what arrangements the White House may have made with Murkowski.