Behind the doomed effort to defend, promote Dourson 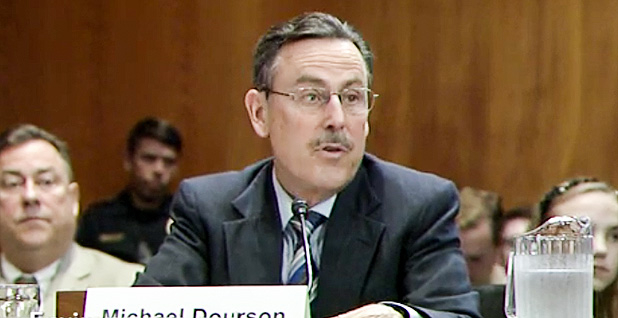 Michael Dourson, who has withdrawn his nomination to lead the EPA's Office of Chemical Safety and Pollution Prevention, urged his former University of Cincinnati colleagues to "maintain a radio silence" during his troubled confirmation process. Senate Environment and Public Works Committee

U.S. EPA and President Trump’s pick for the agency’s top chemical safety post, Michael Dourson, sought to tightly control information about the nominee and quickly rebut unflattering news reports about him, according to emails obtained by E&E News under the Ohio Public Records Act.

The effort fell short. Dourson withdrew from consideration for the position yesterday amid bipartisan concerns about his background. He continues to advise EPA Administrator Scott Pruitt (Greenwire, Dec. 13).

The communications centered on a Sept. 20 article by Associated Press reporters Michael Biesecker and Jeff Horwitz — "EPA nominee once helped chemical industry, lobbyists" — that detailed Dourson’s work criticizing studies that raised concerns about the safety of products sold by clients of his nonprofit firm.

"Please let me know if you have specific responses/push backs to this article," EPA spokeswoman Liz Bowman wrote to Dourson that afternoon. "And please especially note any falsehoods or inaccuracies."

Dourson thanked her for the "the opportunity to help" and went through the article in just under an hour, adding responses to nearly every paragraph that mainly emphasized the public health mission of Toxicology Excellence for Risk Assessment (TERA), the nonprofit he led before joining the University of Cincinnati faculty.

The only alleged errors he flagged were that AP understated his annual university salary by $64,000 and that the industry-funded "Kids + Chemical Safety" website TERA created "is not defunct," as the story claimed.

"Related government websites are either data-dense or not user friendly; activists websites appear to be more designed to support fundraising," he wrote to Bowman. "This website is under consideration for adoption by another group."

Dourson also disputed the story’s characterization of TERA’s work in a study of a West Virginia town whose water was contaminated by perfluorooctanoic acid (PFOA). His nonprofit, he said, merely convened the panel that found PFOA was safe at levels 150 times greater than Dupont’s own internal safety standard.

"This is great, thank you," Bowman responded.

But Troy Lyons, who leads EPA’s Office of Congressional and Intergovernmental Relations, disagreed.

"If we send it to EPW it would just be used for backup material for the majority," he wrote, referring to the Senate Environment and Public Works Committee that was vetting Dourson at the time.

Lyons worried the information could be "misconstrued to fit" a narrative hostile to the nominee.

Dourson also elicited feedback of his university colleagues and filled them in on EPA’s internal debate over whether to publicly attack the story, as the agency had done with other stories by AP’s Biesecker (Greenwire, Sept. 5).

"One side says it just feeds the other side; others are arguing that some kind of response is needed because otherwise silence appears to confirm the stories," he said. "Please maintain a radio silence, however. If we get to speak, I will ask for your help."

In the end, Bowman asked if "TERA folks would be willing to pen an op-ed on this issue?" She added, "I think it would be important to have their opinion and voice out there."

It’s unclear if the op-ed ever materialized. EPA didn’t immediately respond to questions about the request or comment on the email chain. AP also didn’t respond.

A separate email chain obtained by E&E News shows Dourson and his former colleagues sought to bring together chemical- and consumer-product manufacturers with animal rights advocates and federal officials.

Dourson aimed to establish a center that would enable "folks to work together that normally do not," he said in an March 12 message to officials from ANGUS Chemical Co., Unilever, PETA International Scientific Consortium Ltd., the National Institutes of Health (NIH) and other groups.

The center would facilitate a "mind shift" in product testing "from hazard based, target organ toxicity, to predictive safety irrespective of target organ or effect," he said.

"I will ask the various organizations interested in being associated with this center to be part of a joint proposal," Dourson told them.

The following month, he reached out to a mix of industry officials, bureaucrats and academics to provide a "thoughtful response" to his proposal to establish the Institute of Predictive Safety Assessment. "Perhaps as important, we invite your organization to make a financial commitment to support its development," he said.

The April 10 email was sent to representatives of Dow Chemical Co., Exxon Mobil Corp., Syngenta AG, and the American Chemistry Council; officials from EPA, NIH, the Food and Drug Administration; and the director of Johns Hopkins’ Center for Alternatives to Animal Testing.

One of Dourson’s former colleagues followed up by scheduling a phone call with Louis "Gino" Scarano, who was a senior science adviser in EPA’s Office of Chemical Safety and Pollution Prevention, to discuss the proposal on July 21 — four days after Dourson was nominated to lead that office (E&E Daily, July 18).

It is unclear if the call or institute ever went forward. EPA didn’t respond to a request for comment on the proposal, and the university said it was not affiliated with any such group.

"This appears to be something that would have been outside the university and not part of UC," Richard Puff, a spokesman for the school, said in an email.

Other emails obtained by Greenpeace and provided to The New York Times show Dourson continued to work for the American Chemistry Council after being nominated as EPA’s top chemicals regulator.

Sen. Thom Tillis of North Carolina, one of two Republicans whose opposition helped to sink Dourson’s nomination, told E&E News today he was confident the Trump administration would soon put forward a chemicals pick he could support.

"I feel like we’ve got a good bench of nominees that are going to come before us, and I look forward to the confirmation," he said.