Behind the Everglades reservoir funding spat 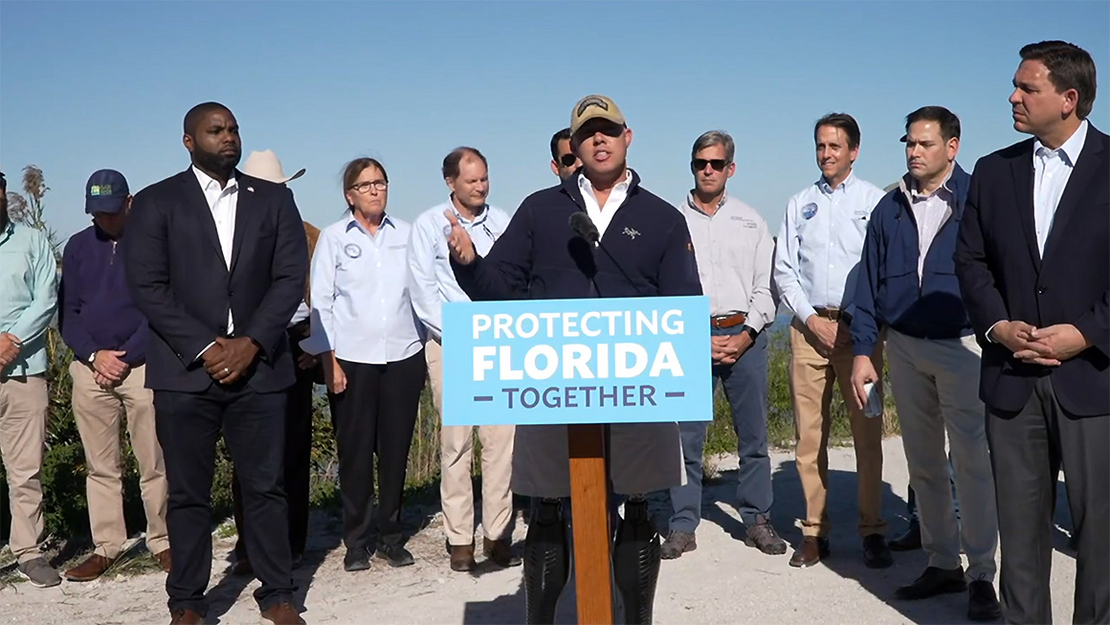 Florida Republicans called out the White House for not using the bipartisan infrastructure package for a planned $3.5 billion reservoir needed to filter water going into the Everglades. Whether they have grounds to accuse President Biden of wrongdoing remains unclear.

So far, the White House and Army Corps of Engineers, which is leading the massive restoration project, have remained mum about exactly why the reservoir, which was included in the president’s budget request, won’t benefit from the $1.2 trillion infrastructure bill.

Florida Republicans, none of whom voted for the infrastructure bill, say they know the answer.

A Mast aide said the lawmaker believes not funding the Everglades Agricultural Area (EAA) Reservoir was a White House decision. Even though there will be more opportunities to fund the project, AnnMarie Graham said relying on the appropriations process is risky.

“Without the infrastructure bill funding, the EAA reservoir will need to go through the annual appropriations process, which is far from a guarantee,” Graham said. “In fact, after the announcement, we reached out to the corps to ask for a commitment to fully fund the project through the annual appropriations bills, but they refused to make that assurance. It sounds very much like the timeline of this project is in serious jeopardy.”

The reservoir is a sprawling project south of Lake Okeechobee that, once constructed, would catch and filter nutrient-supercharged water from the lake before it flows south into the Everglades and beyond. The project is a collaboration between the federal government and Florida.

The state, which owns the land, has spent $290 million since 2017, taking the lead in constructing a 6,500-acre wetland to remove nutrients that fuel toxic algal blooms in coastal areas and foul the Everglades.

The corps faces a tougher challenge, having taken on the task of building a 17,000-acre reservoir — not yet under construction — to catch polluted lake water before it flows into the wetland at a cost of more than $3 billion.

While the state has said it’s slated to complete its portion next year, the Army Corps estimates the reservoir will be done by 2029. After that, agency plans call for testing the system through 2031.

Florida Republicans say the state has done its share of the work for a project DeSantis — who may have national political ambitions — sees as part of his environmental legacy. Former President Trump, GOP lawmakers point out, also backed the project.

DeSantis said the infrastructure bill not including money for one of the “most important projects in the United States” shows the bipartisan bill was more ideological and less about infrastructure.

Earlier this month, the Biden administration touted $14 billion in newly appropriated-funds to pay for more than 500 projects for the nation’s ports and waterways across all 50 states. Just over $1 billion would be for Everglades restoration (Greenwire, Jan. 19).

A White House fact sheet called it, “The largest single investment ever to restore and revitalize the Everglades in Florida.” But absent from the many projects slated to receive cash was the reservoir.

Florida Democrats like Reps. Debbie Wasserman Schultz and Lois Frankel released statements shooting down Republican criticism. For one, they said, those GOP lawmakers voted against the infrastructure package.

“If they want to help restore this lifeblood of Florida, they need to do their job, take tough votes, and do real work just like the rest of America does to fix our problems,” said Wasserman Schultz. “These are people who tried to prevent Everglades restoration funding from becoming a reality. This armchair quarterback commentary isn’t helpful when you refuse to get in the game.”

Democrat Ken Russell, a Miami commissioner who is running to unseat Rubio, penned a blog post in the Orlando Sentinel, accusing the Biden administration of favoring projects above and below Lake Okeechobee while omitting the reservoir, which sits on land that was “hard fought” from Big Sugar.

The reservoir, he wrote, would secure the most relief for Everglades restoration by sending water to the Everglades and both coasts, instead of sending it to irrigate sugar cane. The industry tends to funnel donations to both Republicans and Democrats.

“This historic spend has been sugar-coated to taste like a huge win for the Everglades,” Russell wrote. “In reality, it prioritizes the bitter interests of Big Sugar over true Everglades restoration.”

Congress authorized the reservoir in its water projects bill for 2020. Trump signed the legislation into law in December of that year.

President Biden, in the fiscal 2022 budget plan, requested $350 million for the Everglades. The White House would give the Army Corps flexibility, and the agency said it planned to use $270 million solely on the reservoir.

But Congress hasn’t finalized the fiscal 2022 spending bills and the government is currently running on a continuing resolution. For now, the Army Corps says it had awarded $80 million for the reservoir.

Mast requested a House spending bill earmark worth $725 million for Everglades restoration, but lawmakers whittled that down to $350 million in the chamber’s Energy-Water spending bill (E&E Daily, July 13). Wasserman Schultz and Frankel are top appropriators.

With the government operating at level-funding, Graham said that “the ultimate resolution is still an open-ended question, but it doesn’t look promising.”

Top House and Senate appropriators met on Capitol Hill yesterday with the goal of crafting an omnibus spending package for the rest of the fiscal year. They need to get it done by Feb. 18 or pass another CR. The meeting broke with promises to keep talking.