Behind the GOP plan to blame climate action for rising prices 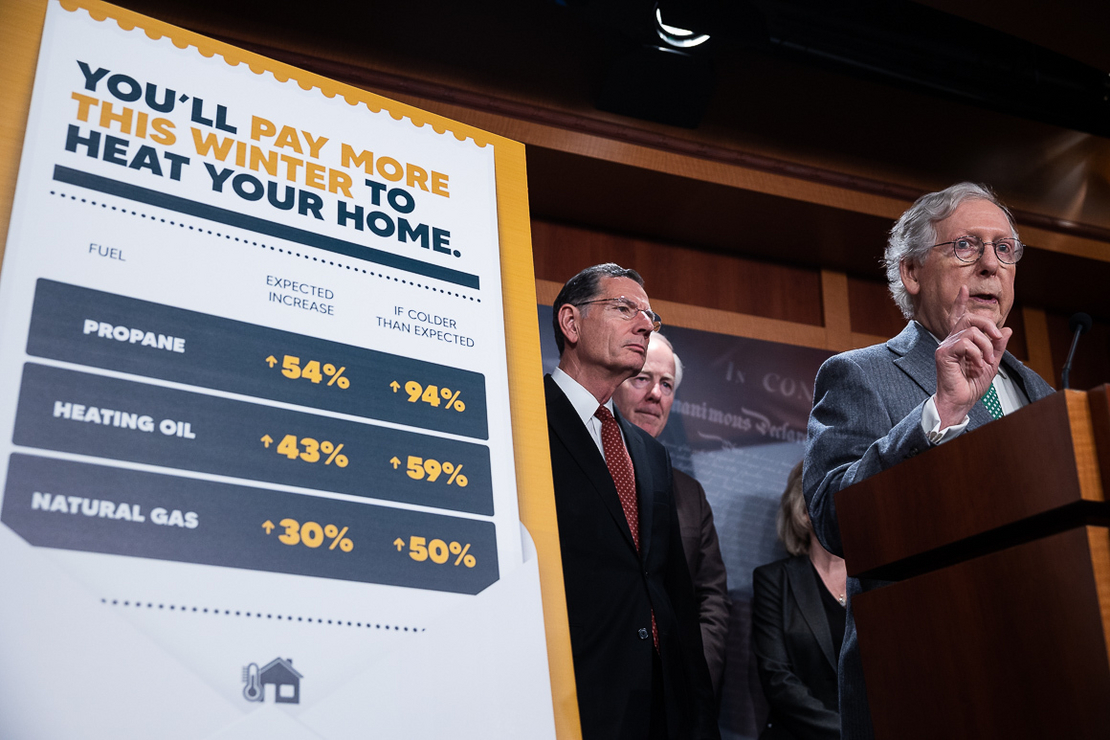 Republicans are trying to tie the highest inflation rate in 30 years to Democratic climate policies. And Wall Street is helping them make the case.

By shifting away from fossil fuels and toward renewable energy and electrification, the argument goes, people will have to pay more for everyday expenses, like gas for their cars and heat for their homes.

At a time when Americans are more frustrated with the economy now than they were at the height of the coronavirus pandemic, according to recent consumer surveys by the University of Michigan, the GOP is growing increasingly confident that its plan of attack just might work.

“They’re going to pay a political price for pursuing green energy policies in an irrational way,” House Natural Resources ranking member Bruce Westerman (R-Ark.) said of Democrats. “I don’t think Americans have a problem with pursuing cleaner energy, but I think they have a problem with doing it in a way … that’s going to drive up prices and not help with the environment or the economy along the way.”

While Republicans have been criticizing Democratic environmental priorities for some time, they now have a burgeoning economic theory to back it up. Some Wall Street analysts are dubbing it “greenflation” — the idea that saving the planet will mean higher prices for consumers (Greenwire, Nov. 17).

“I’m not big on buzzwords,” Westerman said, “but ‘greenflation’ is simply just ‘inflation.’”

By suppressing the supply of carbon-intensive materials like steel, or juicing the demand for clean energy tech like electric vehicles, governments could be inadvertently creating economic shock waves that translate into higher prices in an array of industries.

Perhaps the best example of "greenflation" may be coal. Years of decaying financing in the U.S. coal sector, influenced by environmental regulations and activist investors, have left miners unable to meet demand in the event of supply shocks.

Such a shock happened in October when intense flooding hit Shanxi province in China, knocking the country’s leading coal-producing region offline and sending the worldwide price of thermal coal spiraling upward. Ripple effects were felt in the United States last week, when the price of coal from the central Appalachian region hit $89.75 per ton, its highest level since 2009, according to S&P Global.

With energy prices high, Democrats are pivoting. Pressed about the relationship between the move to decarbonize the U.S. economy while the daily cost of life is rising, Democratic lawmakers and their allies told E&E News that clean energy investments in their massive, $1.7 trillion climate and social spending package will pay off in the long run.

They also argued that the harm of climate hazards outweighs the risk that their policies will stretch an already teetering economy.

Asked about the theory of "greenflation" and rising prices, Sen. Sheldon Whitehouse (D-R.I.), one of the staunchest climate advocates in Congress, said it’s “a great argument if you’re in the fossil fuel business.”

And, Whitehouse added, “even if it were true, which I do not concede, it’s also a completely one-eyed look at a problem that has another important dimension, which is the harm."

“Tell somebody who lost their home in a wildfire that they’re better off with no action,” he said.

When people have to pay more for car fuel and electric bills, elected officials in the party in power typically face political consequences.

In 1979, for instance, the Iranian Revolution caused a drop in oil production that reverberated in global supply chain issues, causing gas prices to skyrocket. Then-Democratic President Carter called for a rationing of resources until the crisis was resolved. Americans responded with “Carter, Kiss My Gas” bumper stickers. Ronald Reagan won the 1980 presidential election.

Today, actions taken by the Biden administration and Congress to limit fossil fuel production might not have an influence on current prices, but they could down the road, some analysts say.

“From a political perspective … no new drilling [and] no new fracking on public lands, cancellation of Keystone XL pipeline, those things don’t do anything to curb demand for fossil fuels, but they certainly limit the supply of it,” Jack Manley, global market strategist at J.P. Morgan Asset Management, recently told E&E News.

As the year draws to a close, the national GOP is slamming Democratic green policies as contributing to inflation, citing Democrats’ push to phase out fossil fuels and traditional energy production as the cause.

The reconciliation bill, which includes $550 billion in climate provisions, as currently written would impose a fee on methane emissions, which Republicans are calling a “natural gas tax” or a “heat your home tax.”

House Energy and Commerce Committee ranking member Cathy McMorris Rodgers (R-Wash.) said in an interview that the Democratic energy agenda is without question contributing to ongoing inflation and that Democrats will suffer at the polls because of it.

She cited a litany of energy policies that she said are contributing to inflationary pressures, including a “natural gas tax” — a reference to the methane fee — in the reconciliation bill.

“[That’s] in addition to closing down the Keystone pipeline, saying yes to Nord [Stream] 2, potentially shutting down Line 5,” McMorris Rodgers said, ticking off pipeline projects. “This combination of shutting down federal leasing on federal lands on energy projects … it is an agenda that seems to be promoting wind, solar and batteries at the exclusion of everything else.”

Her views echo those from Republican leadership.

In a floor speech ahead of the vote on the reconciliation bill last night, House Minority Leader Kevin McCarthy (R-Calif.), tied the Biden administration’s climate and energy policies to higher prices. "I wonder how many people in this winter might not make it through because they can’t pay the price of their heating bill?" he asked.

House Minority Whip Steve Scalise (R-La.) at a press conference last month said Biden was eager to head to the now-concluded COP 26 climate talks in Glasgow, Scotland, “so that he can go to brag to his European allies about how much he’s wrecking America’s economy with higher taxes, higher spending and Green New Deal-type proposals that will make it more and more difficult for families to heat their home in the winter … all in the name of saving the planet.”

The National Republican Congressional Committee has also been taunting vulnerable incumbent Democrats for either downplaying the problem or ignoring it.

“You can make a really good argument that within the four corners of [Biden’s] executive order on the pause for energy developments and things like that … you have not had this profound impact on prices,” Graves said. “But the signal to the markets of that pause … all of these are really powerful financial signals to the markets that are contributing to the increase in costs.”

Give me fuel; give me fire

To deflect these accusations, Democrats are making moves to show they appreciate the severity of inflation on gas prices and home heating costs. But in acknowledging that costs are going up, they could be playing into Republicans’ hands.

In late October, a bipartisan coalition of 10 senators urged the president to “take federal action” to drive down heating costs this winter, including limiting natural gas exports and tapping into the Strategic Petroleum Reserve.

“Given the lower inventories of crude oil, propane, and natural gas, the lower levels of production, and the continued complications in the supply chain, there is an undersupply that could result in significant price shocks and supply disruptions,” the lawmakers wrote on Oct. 28.

That letter was included alongside dozens of headlines and clips of news coverage warning of economic catastrophe under Biden’s watch. It was meant to send a clear signal: Republicans are paying attention when Democrats even tacitly acknowledge the consequences of "greenflation,” and they will weaponize those words against them.

Asked whether the issue will resonate in the 2022 midterms, Graves replied, “You go ask anybody at home who is paying double, or whatever, to fill up their car — if we have a tough winter, if we have fuel shortages and price spikes — then hell, yes.”

Democrats argue that climate policies will make life cheaper for Americans, and accuse Republicans who link decarbonization to higher prices of fearmongering to the benefit of fossil fuel industries.

“I think first of all, anytime you take steps to be more productive and more efficient, that helps to temper inflation,” Wyden said. “Those are forces that help to tamp down inflation. … I watch people on the far right make all kinds of things up.”

In a statement to E&E News, Democratic Congressional Campaign Committee spokesperson Chris Taylor did not directly address the cause of rising prices, but said House Democrats will get credit for sending the $1 trillion bipartisan infrastructure package to Biden’s desk, one that “helps ensure America’s energy independence, invests in cost-cutting efficiency measures, and will deliver a more resilient power grid that can stand up to extreme weather events.”

The separate reconciliation measure, Taylor continued, will “make deep investments in meeting our climate goals.” He said that “Republicans are sitting on the sidelines heckling progress while Democrats govern. American families won’t be fooled by their games.”

Alex Taurel, conservation program director with the League of Conservation Voters, who has been working to protect a number of climate provisions in the reconciliation package, is also ready to defend his priorities against Republican attacks.

This week, he cited a report from Taxpayers for Common Sense showing that the bill’s proposed ban on new oil and gas drilling off the Atlantic and Pacific coasts and in the eastern Gulf of Mexico would actually have “no impact” on the current price of oil.

Raising royalty rates for oil and gas drilling on federal lands, meanwhile, has had “little impact on production” of domestic oil, according to the same study.

“It’s disappointing that Republicans are exploiting families’ pain by making bad-faith arguments about the cause of inflation and gas prices in order to promote policies that pad oil executives’ salaries,” Taurel said.

Whitehouse expressed similar sentiments, noting that when “your party is funded by the fossil fuel industry, you’ll tie anything unpopular” — like inflation — ”to climate action.”