Behind the polling on Latinos, climate and the Fla. vote 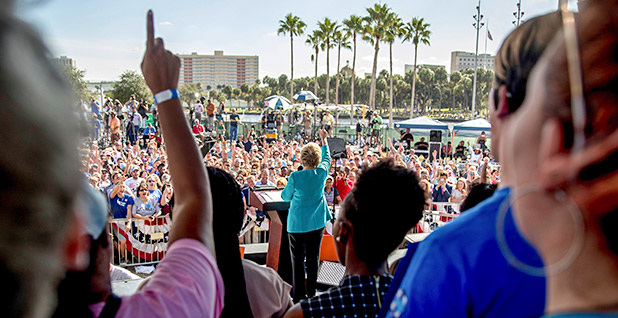 TAMPA, Fla. — On a wall full of guns is a sign that welcomes the presence of personal firearms in a cluttered pawn shop at the heart of this election battleground state.

The invitation also extends to receptive ideas about climate change. A big 29-year-old by the name of Chris Fajardo answered easily when asked whether people are affecting the Earth’s temperatures.

Fajardo handles sensitive deliveries for the store, and he pressed an inky thumbprint onto a government form before leaving with a package late last week.

Fajardo is the kind of voter Democratic presidential nominee Hillary Clinton is desperately trying to attract in the final days of the presidential race. He’s young, Latino, and potentially open to her appeals about addressing inequality, student debt and global warming. Polling shows that Latinos are more concerned about rising temperatures than white voters, by double digits.

Clinton is trying to tap into those beliefs to heighten turnout here. She and her high-powered surrogates are hopscotching Florida in a frenzy of appearances before Election Day. One focus is on the important cross-state corridor between Tampa and Orlando, a hotbed of young and Latino voters. Those two media markets alone are home to 44 percent of the state’s registered voters.

In each appearance, she’s repeated her warning that Donald Trump, her Republican opponent, disputes the scientific findings on global warming.

"People call 311 because they assume a water main has broken when it’s actually the sea rising around them," Clinton said in Lake Worth, Fla., last week. "This is a big deal for Florida. And I regret to tell you that Florida is behind in dealing with this challenge."

The focus on Florida is intense. Clinton spent the weekend there campaigning, with an assist from Jennifer Lopez on Saturday. President Obama on Friday spoke to a sellout crowd of about 10,000 on the campus of the University of Central Florida. Former President Bill Clinton will be in the state tomorrow.

Her gambit could pay off, according to political scientists. Obama won Florida by just 74,000 votes in 2012, or 0.9 percentage points. No other state was as close. Turning out a thousand people here and there can help decide the outcome in this politically divided state.

Recent trends stand to help her. It wasn’t long ago that Florida Latinos favored Republicans. The large Cuban electorate based in Miami helped carry President George W. Bush to victory in 2004. Then the Latino electorate shifted suddenly in 2008, largely because of an influx of Puerto Rican voters. It’s been getting bluer ever since.

No other group of voters has grown as fast in Florida. Hispanics accounted for 88 percent of the Democratic Party’s growth in registered voters in the last 10 years. There are now 678,000 Latinos registered as Democrats, compared with 479,000 as Republicans, according to the Pew Research Center. Together, they account for about 15 percent of the state electorate.

"The Democrats have been very aggressive in registering them as they arrive," said Susan MacManus, a political scientist at the University of South Florida, referring to Puerto Rican immigrants.

A Democratic-allied group called Mi Familia Vota helped about 33,000 people register to vote in Florida this year. Now it’s trying to ensure they cast a ballot. About 10 group volunteers were seen fanning out to encourage turnout in a Tampa neighborhood last week.

For all the Democrats’ success in expanding Florida’s Latino electorate, not everyone can be reached.

Four men sat idly on a curb behind a gas station, waiting to hand wash cars that might come by. Three of them said they won’t vote.

"I’m not even gonna waste a day," said Roberto Gonzalez, a 26-year-old father who pulled a $20 bill from his pocket to show his day’s wage. He said Clinton and Trump are very similar. He wasn’t talking about their policies, but their wealth. "The president is gonna be the same."

A study conducted by Stanford University last year found that Latinos are much more likely to feel personally vulnerable to the effects of climate change than whites. But the researchers haven’t been able to pinpoint why.

Overall, 54 percent of Latinos say climate change is extremely or very important to them on a personal level. That’s twice the rate of whites.

They also feel more threatened by it. Forty percent of Latinos said they worry that warming will hurt them a great deal or a lot, compared with 29 percent of whites. Those concerns bleed into their support for action. Latinos show more support than whites for government programs to cut emissions, higher levels of belief in man-made climate change and more support for U.S. policies that financially help other nations address warming.

Some believe that could translate to votes.

"They are more likely to attach personal importance to the issue, and more likely to vote based on it," said Jon Krosnick, a Stanford political scientist who oversaw the poll.

But those are just statistics. People in these palm-punctuated communities sometimes resist being put into categories. They are rich with subtleties. Some believe in climate change but are voting for Trump, who’s called it a hoax. Others believe global warming is an invention of the political class, like Clinton and lawmakers of both parties.

"I voted for Trump. I no like Hillary, she is a criminal," said Anna Espinosa, 52, as she pulled the sheets off a hotel bed.

About Trump, she pointed to her head and said, "inteligente." She said climate change is "very scary," not for its impacts, but because it’s used "to control" the public.

‘We should let nature take its course’

Pollsters estimate that only about 13 percent of people nationally see global warming as a top issue when casting a ballot. That includes people who are for and against it.

But to Krosnick and other researchers, there’s almost zero downside to talking aggressively about tackling climate change. It can only win votes, they say. That’s because only about 5 percent of these climate voters feel passionately that global warming doesn’t exist. The other 95 percent see it as perhaps the most important issue facing the globe.

In that way, climate change may be alone.

"It’s the only issue I’ve ever seen where if a candidate takes an explicit position on one side of the issue, it significantly enhances the number of voters who are attracted to them and inspired by them," Krosnick said.

Not everyone can be persuaded.

Fajardo, of the A-1 Pawn & Gun Shop, won’t be voting for Clinton, he said. On climate change, which he says is a problem, he seemed unconcerned about the way a Trump presidency might, or might not, handle it.

"We should let nature take its course," he said. "There’s worse."

Others who see the impacts of rising temperatures on their childhood sanctuaries are also reluctant to cast a vote for president based on that singular issue.

Jessica Fernandez, 31, is president of the Miami Young Republicans. She speaks solemnly about the degradation of coral reefs near her home, unwise development that threatens species and flooding from sea-level rise.

She received some crossways looks from her members for holding two monthly meetings on the environment in the span of a year. But it’s too important to dismiss, she said.

"It affects us every day," Fernandez said.

Yet she voted for Trump, who’s called global warming "bullshit."

"I think his message is probably not the most sophisticated," Fernandez said, adding that Trump is correctly sending a message to the middle class that Democratic climate policies could hurt them.