Behind the scenes of Pruitt’s Nevada trip 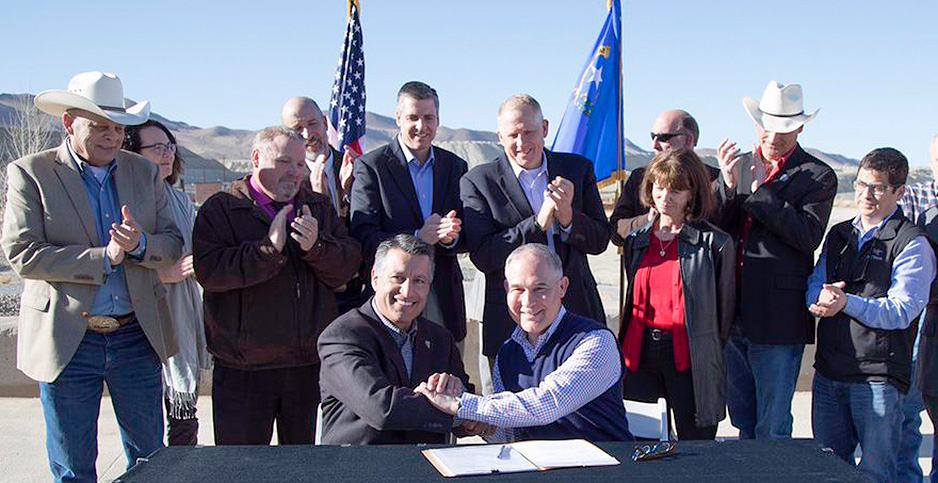 Nevada Gov. Brian Sandoval (R) and EPA Administrator Scott Pruitt (left to right, seated) shake hands after signing a deferral agreement on the cleanup of the Anaconda copper mine. @GovSandoval/Twitter

She had a question for Ashley Jonkey, state director for Sen. Dean Heller (R-Nev.).

"Did Allen Freemyer reach out to you on the Coeur part?" Robinson asked in an email the Friday before Pruitt’s arrival in Nevada.

"Yes, he did. That was nice," Jonkey responded. "But like you said, kind of strange that a lobbyist is reaching out on behalf of EPA. Ha!"

Robinson corrected the Heller aide, saying she didn’t believe Freemyer, a registered lobbyist for Coeur Mining Inc., was acting on EPA’s behalf. Instead, she was worried about who else he had told about Pruitt’s planned visit to Nevada — the administrator’s travels are typically hush-hush, with no advance notice.

"Not sure how/why he knew, but he’s not supposed to. I’m worried because of who else he notified," Robinson said of Freemyer. "I sent him a not-so-nice email."

Freemyer told E&E News he was contacting Nevada’s congressional delegation at the direction of his client, Coeur Mining, not on behalf of EPA.

"I had zero interaction with EPA," Freemyer said. "I was simply calling lawmakers so they wouldn’t be surprised when Administrator Pruitt showed up in their state at my client’s mine."

More than 160 pages of emails, memos and itineraries obtained by E&E News under a Nevada public records request offer a unique snapshot of what it takes to pull off a stop by Pruitt and his EPA entourage. They show that you should anticipate weeks of emails and conference calls, advance site visits, and working overtime to help bring Pruitt into town.

"It would have been more fun if I wasn’t working on this GD tour the whole time. EPA event — organized by me. … Oh well," Robinson said in one email.

Pruitt did go to Nevada in February. He toured Coeur Mining’s Rochester mine — a silver and gold open-pit operation — and then traveled to the Anaconda Copper mine to sign a deferral agreement with Sandoval, which keeps the Yerington site off the EPA Superfund program’s National Priorities List. Instead, the Nevada Division of Environmental Protection and Atlantic Richfield Co. — a BP PLC subsidiary that in 1978 acquired the former owner of the now-defunct mine — will oversee the site cleanup.

EPA initially proposed adding the Anaconda site to the Superfund list in 2000, but Nevada declined to support it. By 2016, Sandoval, however, conditionally agreed to the listing only to have EPA defer it last year, after Atlantic Richfield came forward to fund the cleanup.

Pruitt’s morning stop at the Rochester mine also gave EPA a chance to highlight its work in turning back the agency’s proposed Obama-era financial assurance rules for hardrock mines. According to the Nevada trip’s proposed schedule, prepared for the White House, EPA also noted that Coeur Mining CEO Mitch Krebs was "personally inspired" by President Trump and had read his book, "The Art of the Deal."

Robinson offered some edits on that memo for Tate Bennett, EPA’s head of public engagement. She crossed out "rolling back" in one line.

"NOTE: rolling back is sometimes construed as less protective, but if internal, it may not matter," Robinson said.

"Is it possible for someone from ARC/BP to be in the car with the Administrator during the tour? (probably John Mingé)," asked Maria Antonieta Viso with BP America Inc. in one email. Mingé is CEO of BP America.

It’s not clear if Mingé did end up traveling with Pruitt. An Atlantic Richfield spokesman offered a statement but didn’t respond to a follow-up question from E&E News asking if the CEO had rode alongside the administrator.

"For safety and logistics reasons, a single bus was used to transport visitors for the tour. Guests used their own vehicles for travel to and from the site," the spokesman said.

In a separate email, Robinson told an EPA aide that Mingé and Bob Genovese, president of Atlantic Richfield, would greet Pruitt and other officials at the Anaconda site. In addition, the two could stand behind Sandoval and Pruitt for the signing ceremony.

Pruitt’s travel has attracted scrutiny, enough to spark an audit by the EPA Office of Inspector General that is expected to be released this summer. In addition, Kevin Chmielewski, EPA’s former deputy chief of staff for operations and a Trump appointee, told Democratic lawmakers’ aides that Pruitt has reportedly told EPA staffers, "Find me something to do [in those locations]," suggesting the administrator’s frequent trips are less about official business and more about personal desire (Greenwire, April 12).

State records obtained by E&E News in previous requests show that the hosting officials worked to limit knowledge of Pruitt’s forthcoming visits to only a few people. And while the EPA chief would do one or two local media interviews, the press was kept at arm’s length away from the principal. Also, attendees of Pruitt events were carefully selected (Greenwire, Jan. 25).

In one email, Robinson described how the deferral agreement signing would be behind a locked gate and said staff were still working on "details on how to keep the ‘official’ party separate from the ceremony invitees for touring purposes." Pruitt and other top officials also took a van for the Rochester mine tour, while other attendees, including the press, were in a large bus following behind.

A timeline of the day’s events showed that Pruitt had about 20 minutes for "Q&A" as well as photos and talks with miners at the Rochester mine, and then about 15 minutes for photos and interviews at the Anaconda Copper mine site.

Even that limited access resulted in a front-page story in the Elko Daily Free Press. Pruitt also sat for a local television interview on his Nevada trip.

Some were trying to glean more information about Pruitt’s Nevada trip before he arrived. The Friday before his visit, a top staffer for Sen. Catherine Cortez Masto (D-Nev.) emailed a Sandoval aide saying their office was hearing that the EPA administrator was heading to the Anaconda Copper mine in an appearance with the governor.

"Anything you can share with us?" asked Laura Hatalsky, Cortez Masto’s deputy chief of staff.

After much back-and-forth between the Republican governor’s aides on how to respond to the Democratic senator, Ryan McGinness, Nevada’s chief federal lobbyist, said the following Saturday, "I sent them an update just now, told them it was an EPA event but did not direct them to anyone for more details."

A Cortez Masto spokesman told E&E News that neither the senator nor her staff were invited to the event. Aides had heard about it through a third party and had to reach out to those involved for confirmation.

"Our office was not informed of the administrator’s visit to Nevada and was not involved in any way," said Rey Benitez, the Cortez Masto spokesman.

Others were upset with how Pruitt’s Nevada trip came about, including his signing of the agreement with Sandoval.

Laurie Thom, chairman of the Yerington Paiute Tribe, said in an email that she only learned about the EPA boss’s visit the Friday before he came. She and the tribe’s environmental director couldn’t attend, since they were traveling that day. Further, the tribe was not on board with the deferral agreement.

"We believe that the Joint Commitment is premature and it strong-arms the Tribe," she wrote. Thom said the announcement of the deferral agreement was "a photo op" and fell short of EPA’s obligations to the tribe.

Last September, the tribe filed a lawsuit in tribal court against Atlantic Richfield and BP America, alleging that the companies had failed to remove and clean up toxins from the site. Contaminated wastewater coming from the Anaconda Copper mine site has seeped into the tribe’s property, compromising the health of their members, they allege in the suit.

Thom was included on an attendees list for the event with Pruitt, although that was under "Not all invited/confirmed" on the document. Amber Torres, head of the Walker River Paiute Tribe, indicated in response to an email invitation to her and Thom that she would come.

EPA has pushed back on Thom’s contention that she wasn’t asked to join the event. Alexis Strauss, the acting EPA Region 9 administrator, said Thom had received two invitations to the event, reported the Mason Valley News.