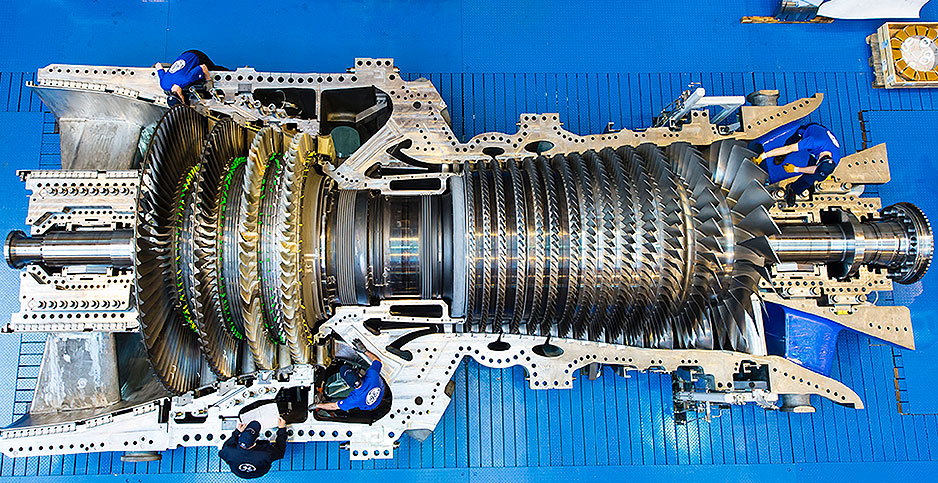 A General Electric Co. HA gas turbine is assembled in Greenville, S.C. GE has steadily expanded its 3-D capabilities, transporting them to its turbines. GE

A little smaller than a soda can, its thick walls are pierced by a series of holes seemingly drilled lengthwise, surrounding the center passageway. Except on second glance, the holes are uniformly curved. No drill could do that, confirms Goodwin, the leader of General Electric Co.’s $73 million advanced manufacturing center here in Greenville.

GE made the tube with 3-D adaptive manufacturing, using a laser’s intense heat to weld metal powder to form thin layers of solid metal, one atop the other, to create the complex design. It is part of the fuel assembly that delivers natural gas and massive volumes of air to burners on the business end of a GE natural gas turbine, the core product of the GE Power division.

The part is a virtual dust speck in GE’s 1-million-square-foot manufacturing facility here. But it is also a prime example of an opportunity, and an imperative, for GE to keep pushing its technology forward even in the face of the heavy losses its power division has suffered.

GE Power’s profits plunged 88 percent in the fourth quarter of 2017 from the same period the year before, as demand for turbines fell across the board. GE says it will take out $3.5 billion in structural costs over 2017 and 2018 to try to pull more cash from its operations.

Starting a decade ago with parts for its jet engines, GE has steadily expanded its 3-D capabilities, transporting them to its turbines. "We set up a production line here in 2015," said Goodwin, interviewed in the Greenville lab. "It feels like we’ve been full-out ever since."

GE’s new chairman, John Flannery, appears to have exempted additive manufacturing from the downsizing he ordered for GE Power after taking over last year. In a conference call in January that was otherwise draped with bad news, Flannery hailed GE’s invention of what he termed the world’s largest laser powder additive manufacturing machine, which can produce the structural parts of jet engines.

But the race is on. GE’s foremost rival, Germany’s Siemens AG, sees it just the same way. Tim Holt, CEO of Siemens Power Generation Services division, told an Energy Department technology conference Wednesday, "For us, it is a technology that can change the way we do business."

Whether GE’s technology will move fast enough in a cost-cutting environment hangs over the company now. As a U.S. standard-bearer in the global competition for manufacturing leadership, GE’s future has a powerful symbolic importance as well as its meaning for 300,000 employees and many millions of shareholders.

It doesn’t have much choice but to keep pushing, according to an analysis of the U.S. manufacturing sector by McKinsey Global Institute’s research study, "Making it in America: Revitalizing U.S. Manufacturing."

Technologies available to manufacturers are at a new takeoff point, with advances in 3-D printing, collaborative robots, higher-power design tools and artificial intelligence, for example, backed by ever higher levels of computing power, the institute’s report notes.

"You’re seeing these companies being able to deploy technologies both to be able to speed up their design and get to market faster, but also to be able to do it in an efficient way," said McKinsey Global Institute partner Sree Ramaswamy.

While Ramaswamy did not direct comments specifically at GE’s challenge, he said it’s clear that U.S. manufacturers cannot jump off the train and hope to catch up later.

"You have to have that long-term mindset, to say, ‘I’m going to place bets on a bunch of these things. I’m going to watch which ones are going, and I’m going to invest heavily at scale behind that,’" he said in an interview. "The organization has to go through a learning curve to get there.

"You can’t just buy these things off the shelf and plug them in," he said.

GE’s 3-D manufacturing started in its jet engine business. There, engineers working on a new fuel nozzle wanted ways to change the inside of the part.

"They had a young guy who said, ‘If I can make the part exactly the way I want to draw it, I could solve this problem,’" Goodwin said. Three-dimensional printing made that possible.

The temperatures inside GE turbines pass 2,600 degrees Fahrenheit, hot enough to melt the nozzles unless the parts are cooled, in this case by air. The best way to do that: "Get small, intricate passageways built into the parts themselves," Goodwin says. "If you put a whole bunch of small tubes in there, you don’t have to push as much air through." Three-dimensional printing does that. Curving the air passageways, in the part Goodwin showed off, improves efficiency of the air flow, he explained.

"You slice it up into layers, about 40-50 microns thick" — roughly half the dimension of a human hair, Goodwin said. "What that becomes is essentially a stack of layers of metal that you’d, like, have in the final part."

"We’ve had lasers for years; we’ve had computers for years; we’ve had welding for centuries; why is it suddenly working now?" Goodwin said. "Two of the reasons are, if you were to go back 20 years, the lasers that were around were just not affordable and robust enough to be used as we are using them. And the computers around 20 years ago just weren’t fast enough to drive the models we see today.

"You can already see, the machines we’re using today are twice as productive as they were when we started," Goodwin said. Some of that is better machines, but experience has mattered a lot, too, with better understanding of the materials and how to manage lasers, he said.

It is an illustration of the McKinsey Global Institute’s point — the progress is often incremental, but it compounds.

"Some of the parts we’re making for ourselves and for aviation, you can’t make any other way," said Eric Gebhardt, GE Power’s strategic technology officer. "The complexity inside can’t be machined, can’t be manufactured. It has to be 3-D."

"We’re working to do more complex parts," he adds. "It’s a viability threshold based on cost. As costs continue to come down and speed continues to go up, more and more parts become viable."

Three-dimensional parts are also helping GE try to tune its gas turbines to team up with wind and solar power, enabling the units to work at lower speeds, then react to a sudden drop in renewable energy, said John Lammas, vice president and chief technology officer for GE’s gas power systems.

Inside GE’s combustion laboratory in Greenville, lab leader Dan Behal shows off a redesigned burner assembly that takes advantage of 3-D parts. This too cannot be photographed.

"What’s great about additive manufacturing is, complexity is free," said Gebhardt. "It will cost the same to 3-D print a square block as a very complex shape. There’s a lot more to come."

“What’s great about additive manufacturing is, complexity is free. It will cost the same to 3-D print a square block as a very complex shape. There’s a lot more to come.”

"We’ve got a very big installed base in Power," GE Chief Financial Officer Jamie Miller told analysts last month. "We expect those units to be utilized well out into the future," and that creates a continuing opportunity for parts and service.

"The returns on capital investment, they’re not going to show up in one quarter, one year — or even three to five years. Sometimes they take seven to 10 years," said McKinsey Global Institute’s Ramaswamy. "The organization has to go through a learning curve to get there."

If there’s an environment where the companies feel like they have to respond to short-term pressures, whether justified or not, their behavior will follow, he added.

"These are basically innovation industries — both turbines and wind," said Robert Atkinson, president of the Information Technology and Innovation Foundation, speaking of two of GE’s core businesses. "There is a real risk of falling into a downward cycle in these industries.

"The risk is, if you have to take a hiatus, and conserve cash, you don’t keep ahead as much as you need to, and your competitors catch up. I’m not saying that’s what’s going to happen," Atkinson said of GE. "But it’s a risk.