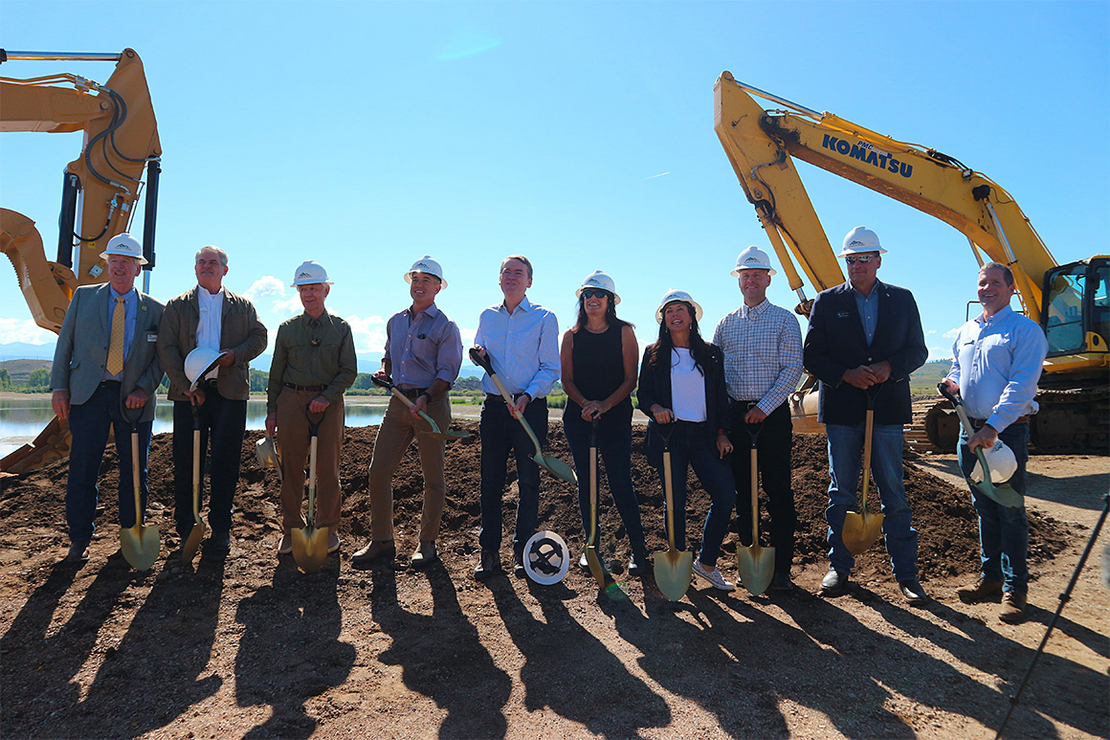 WINDY GAP RESERVOIR, Colo. — Colorado Sen. Michael Bennet (D) revealed today that he and Utah Sen. Mitt Romney (R) are drafting legislation to pump additional funds into the shrinking Colorado River Basin but insisted any planned cuts to water use must come from the states themselves.

Bennet’s comments come in the wake of the federal Bureau of Reclamation’s decision last week to trigger the most severe shortage declaration to date in the basin, affecting the seven states that share the 1,450-mile-long river (Greenwire, Aug. 16).

Negotiations over how to conserve as much as 4 million acre-feet of water — or 25 percent of the total water allocated to all seven states — continue after the states failed to meet a 60-day deadline set by Reclamation Commissioner Camille Touton in mid-June.

Under the Colorado River Compact inked in 1922, the states — Colorado, New Mexico, Utah and Wyoming in the upper basin and Arizona, California and Nevada in the lower basin — divide 16 million acre-feet of water annually.

But amid more than two decades of drought, more recent estimates suggest the river’s volume is as low as 11 million acre-feet.

The legislation will build on funds already provided by Congress, including $4 billion in the recently enacted Inflation Reduction Act. Those funds may be used to pay farmers to fallow fields, fund efficiency projects, or support ecosystem and habitat restoration (Greenwire, Aug. 9).

“I think is a huge step forward. But it’s just a down payment on what needs to be done,” said Bennet, who spoke about the Colorado River negotiations ahead of a groundbreaking event for a long planned restoration project.

Bennet said that he views the “Colorado River Connectivity Channel” — a $30 million project that will construct a natural river channel around the Windy Gap Reservoir — as a model of what could be done basinwide (Greenwire, May 10).

“More than ever, the future of the Colorado River is in doubt,” Bennet added in a speech to local officials, conservationists and others gathered for the groundbreaking.

“Today is a credit to your partnership, to your perseverance and to your commitment to restore the Colorado,” he added, saying that the channel project should serve as “a model of the kind of collaboration that’s required for us to be able to turn something over that we’re really proud of to the people that are coming after us.”

The project, underway 25 years after its conception, is backed by the Agriculture Department’s Natural Resources Conservation Service, along with Grand County, Colo.; Trout Unlimited; and the Northern Colorado Water Conservancy District.

But amid that push for collaboration, Bennet also dismissed criticisms from fellow Democratic Sen. Mark Kelly of Arizona, who has called for the Colorado River basin states to equally share in any reductions.

In an appearance on CNN’s State of the Union, Kelly said, “Arizona has made an offer to put more and leave more water up in Lake Mead by far than any other state. We need the other upper and lower basin states to step up and do their part” (Greenwire, Aug. 22).

But the reductions in Arizona’s water allocations — triggered in part because the state holds the most junior water rights, or the first to be forfeited in times of shortage — were actually negotiated by the basin states in a 2019 operating agreement.

“We’re going to have to negotiate an outcome that that saves the Colorado River and saves the American West,” Bennet said. “I think the upper basin has been doing more than our part, and we need to see what the lower basin is willing to do.”

Colorado Water Conservation Board Director Rebecca Mitchell likewise said in an interview after the event that the upper basin is “always living within our means.”

“We live with what my Mother Nature provides,” Mitchell said, adding that the four states are “on the front lines of climate change” as aridification spreads across the basin, reducing precipitation and snowpack, and reducing river flows.

“When it is not there, we can’t take it,” said Mitchell, who also serves as Colorado’s representative on the Upper Colorado River Commission. “We don’t have the benefit of a reservoir above us that we can call from.”